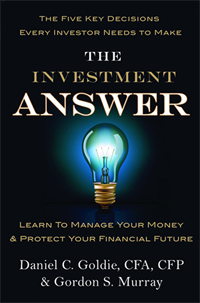 Even in a faltering economy, there is no shortage of books dispensing investment advice. They fill the shelves of bookstore business sections. They crowd out other topics on nonfiction bestseller lists – perhaps second only to biographies of former presidents and current self-help gurus.

While the goal of investment books may be largely the same, there are probably few if any that were motivated in the same way as "The Investment Answer," a book co-authored last year by Gordon Murray, a former patient at UCSF. He wrote the book after battling brain cancer for more than a year, knowing that he had only a few months to live when he started it. He was 60 when he died on Jan. 15, 2011 at his home in Burlingame.

Why did he do it?

"He decided to give back," said Dan Goldie, who was Murray's coauthor on the book.

Goldie and Murray knew each other long before they began collaborating on the book. Murray spent 25 years working at such Wall Street firms as Goldman Sachs, Lehman Brothers, and Credit Suisse First Boston. Goldie was a veteran investment adviser in California. They met more than a decade ago when Murray was retiring and sought Goldie's advice in setting up accounts to manage his money. Together they put together a portfolio, and this began a string of conversations on investment strategy. Those talks would occasionally touch upon the idea that they should write a book together aimed at the everyday investor.

"He would ask me, 'Why doesn't everyone know these tips and invest this way?'" said Goldie. "He really wanted to write a book to educate everyday investors on these concepts."

Nothing ever came of it. Then, in a tragic turn, Murray was diagnosed with malignant glioblastoma, a deadly form of brain cancer, in late 2008. The condition was serious, and he was treated at the UCSF Department of Neurosurgery, the top center for brain cancer treatment on the West Coast. After several rounds of treatment, however, the cancer recurred last summer, and the prognosis was dire. Murray was told he would have only a few more months to live.

When Murray related this news to his friend, Goldie's first response surprised even himself. "I said, we better finish that book," Goldie recalled. Murray’s initial response was that he didn't have the energy. “I convinced him to do it over the next few days by sending him sample titles and revised chapters,” Goldie said.

They wrote the book in three months, and it came out in November 2010.

The basic premise of "The Investment Answer" is that markets work efficiently and will over time generate significant value on initial investments. The key, said Goldie, is that you have to let the markets work – to move away from tying to predict and forecast future stock movements and toward trusting the markets. Concretely, the book describes the five questions all investors should ask and provides sample portfolios and simple tips for investors to think about.

After it appeared, Murray gave numerous interviews related to the book, including on ABC World News Tonight with Diane Sawyer, Nightline, and Good Morning America. He also was interviewed by the New York Times and NPR.

Then there were the fans of the book, said Goldie. The emails from individual investors came pouring in – sometimes hundreds a day.

After the New York Times article appeared, all 30,000 original self-published copies of the book quickly sold out. A publisher then picked up the manuscript and put it out in hardcover early this year. Tens of thousands of additional copies have now been sold.

Sadly, Gordon Murray did not live to see the hardcover edition. He succumbed to the cancer in January shortly before it appeared, leaving behind a loving family, friends and a growing community of investors whose lives he touched.

In a personal note in the first edition of the book, Murray salutes them all:

"I have been extremely lucky to have outlived my brain tumor survival expectations," he wrote. "Luckier still to have had the time to plan and to experience closure and so much love from family and friends; and perhaps even luckier to have had the opportunity to give something back."

"It was his last and best gift back to investors," said Goldie.