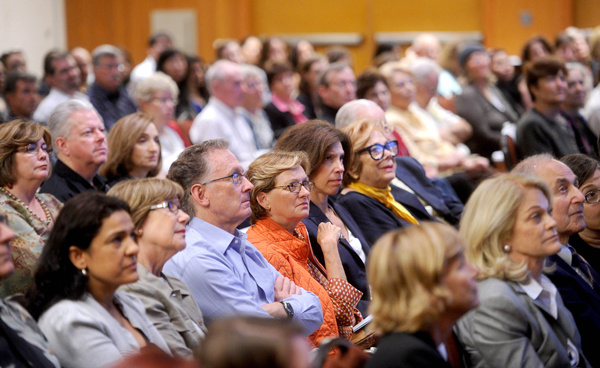 Members of the audience listen to a panel discussion featuring clinicians and caregivers talking about caring for a patient suffering from brain cancer at a recent event at UCSF Mission Bay.

As a $25-million fundraising campaign gets underway for the UCSF Department of Neurological Surgery, three volunteers playing a key role in that effort reflected recently on how they came to be involved in raising funds for brain cancer treatment and research.

Greene and Murray had known each other the longest. They met in the late 1980s when they both moved to the Bay area. Their husbands had known each other even longer, since college days. After moving here, they met Cathy Podell. All three would have their lives deeply touched – and at times turned upside down – by cancer.

Greene lost a brother to leukemia when he was only 21, and her mother succumbed to a different form of cancer at the age of 78. Podell’s husband lost his first wife to brain cancer. Shortly after becoming involved at UCSF as a Foundation board member, Cathy was diagnosed with breast cancer. Last year, one of her closest friends died from brain cancer– a disease some 500 Americans are diagnosed with every day and that kills some 13,000 people in the United States each year.

“Never think that just because you have dealt with a disease once that you are done with it,” said Podell. “You never know what’s going to happen tomorrow.”

Murray’s life was also changed by brain cancer. Her husband Gordon Murray was diagnosed with the disease a few years ago and underwent treatment at UCSF. Last summer, his tumors came back, and he died six months later. “It was just such a shock when he was diagnosed,” said Murray. “Nobody was healthier than Gordon.”

Early this year, the three women started meeting with Mitch Berger, MD, professor and chair of the UCSF Department of Neurological Surgery who was one of the doctors who treated Gordon Murray.

Initially, said Greene, they just wanted to see what they could do to help. “It became obvious to us and to our friends who were treated here that this was something we could do,” she added.

At first, they discussed raising funds for intraoperative MRI equipment, which would allow doctors to better image tumors in real time during brain surgeries. Then they discussed other possible programs. Those discussions quickly expanded and culminated into the $25 million Brain Tumor Initiative, a campaign inspired by Gordon Murray that seeks to do three things: acquire the intraoperative MRI equipment, build out the fourth floor of the Helen Diller Family Cancer Research Building on the UCSF Mission Bay campus as laboratory space dedicated to brain tumor research, and support caregiver programs.

While modern biomedical research and high-tech surgical equipment are certainly cutting-edge, it is perhaps the caregiver component of the initiative that is the most innovative. There is nothing else quite like the UCSF caregiver programs, which aim to support the family and loved ones of people with brain cancer and better integrate them into the treatment process.

More than $3.7 billion is spent in the United States each year treating brain cancer, but this figure does not take into account the often staggering physical, psychological and emotional toll paid by patients and the friends and family around them.

Because of its nature, this form of cancer is often like several diseases rolled into one. Tumors in sensitive areas of the nervous system can cause cognitive decline, dementia, personality changes, memory loss, and a host of physical problems. These symptoms can complicate care by masking other symptoms and making it difficult for patients to articulate essential health information to their doctors.

Caregivers, however, are often aware of the day-to-day changes, and research has shown that their insight can be crucial. Clinical evidence from other forms of cancer shows that engaging caregivers can improve outcomes for patients. Some preliminary data involving patients and their caregivers at UCSF shows this to be true for brain cancer as well.

But engaging caregivers means supporting them as well, since the emotional toll and burden of responsibility that falls onto a caregiver’s shoulders can be overwhelming.

“It’s unspeakable how difficult it is,” said Murray. But this is where the caregiver programs can really make a difference, she said. “There were things I was told very early on in terms of getting myself and my children through it, and I don’t think everybody has the advantage of that information.”

In part, the motivation behind the caregiver component of the Brain Tumor Initiative was this recognition that the programs would be one way to make an immediate and significant impact.

The thrust of the programs will be to hire additional nurses, social workers and other professional staff who engage the caregivers from the moment they walk in the doors to help them address any issues that arise. It will help create information resources for patients and caregivers to help them know what to expect and help them through the process.

“With a relatively small amount of money, we can make a huge difference in what is a very difficult experience,” said Greene.

Berger and his colleagues in the Department of Neurological Surgery have, for the last several years, been leading the call to engage and support caregivers more and more. He predicts the programs funded through the Brain Tumor Initiative will define the future of brain tumor care, and he credits Murray, Greene, and Podell for all they have done.

“They have been instrumental in getting this campaign off the ground and are determined to see it succeed,” he said.