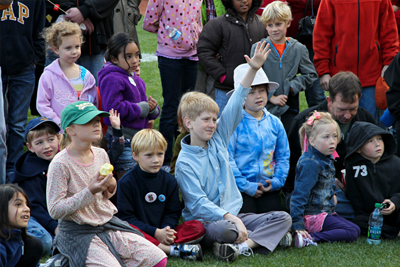 Most of the time AT&T Park is a place for spectator sport: The San Francisco Giants play baseball and everyone else watches. The grand finale of the Bay Area Science Festival was just the opposite, as the ballpark was transformed into a world where children could touch and smell and create and experiment.
Read more | Watch video

UCSF took the lead in staging the Bay Area Science Festival, which came to a successful conclusion during Discovery Day at AT&T Park, which was transformed into a wonderland of hands-on activities aimed at boosting interest in science and technology.
Read more

Retraining the Brain — All Is not Lost, Despite Aging, Injuries, or Mental Illness

Our mature brains may not be so old and inflexible after all. Scientists are discovering that the human brain can improve its performance to counter the consequences of cognitive impairment and even the trauma of stroke-induced brain damage. Read more

Microbes that dwell within us can help or harm us, according to UCSF experts at "Gut Check," a lunchtime panel discussion hosted by UCSF as part of the Bay Area Science Festival last week. Read more

Profile of Bruce Alberts: He Has Science in His Soul

UCSF biochemist Bruce Alberts has devoted his long career to improving the understanding and appreciation of science, which takes center stage at UCSF and beyond as part of the first-ever Bay Area Science Festival. Read more

UCSF's leading scientists will join two authors in five, free public forums about fascinating topics, such as how to handle stress, advances in space medicine and the latest research in diabetes, as part of the first-ever Bay Area Science Festival through November 4. Read more

Not only is the advancement of science and technology fundamental to improving human health and quality of life, it is also crucial to maintaining the nation’s leadership in a global economy, national leaders say. Read more

The San Francisco Bay Area is known for its groundbreaking work in science and technology, yet many who call the Bay Area home have little to no opportunity to experience the wonder of science. The Bay Area Science Festival seeks to change that by providing an amazing opportunity for everyone to learn side-by-side with scientists. Read more