Aging of individual cells in the body leads to aging of the whole person. New evidence for this comes from studies of very rare children born with a genetic mutation that wrinkles, ages and kills them before they reach adulthood. 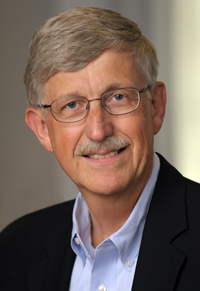 Thanks to research led by the director of the National Institutes of Health, Francis Collins, MD, PhD, a treatment that might offer longer, better lives to children with Hutchinson–Gilford progeria syndrome now is in clinical trials.

The clinical trial and the research that led to it is stimulating scientists to think about ways to fight aging at the cellular level, similar to the way they already have begun to do battle against this most dramatic premature aging disease.

Children born with this form of progeria become strikingly wizened as they age without ever growing to adulthood. They die by about age 12 or so, usually due to heart disease.

Progeria – Not a Cartoon of Aging

Progeria has often been portrayed as a “cartoon of aging,” from which little could be learned about normal aging, according to Collins, this year’s Charles J. and Lois B. Epstein Visiting Professor. He does not share this view. “I think we can counter that with molecular data,” he said during a talk at the UCSF Mission Bay campus on Oct. 3, part of a daylong symposium hosted by the Institute for Human Genetics.

The common culprit Collins has identified in normal and premature aging arises for different reasons. In normal aging, Collins suspects damage or loss of telomeres — protective DNA that caps genes at the tips of chromosomes within all our living cells.

Telomeres seem to be turning up everywhere in aging research. UCSF’s Elizabeth Blackburn, PhD, shared a Nobel Prize for the discovery of an enzyme that replenishes bits of telomeres that are lost every time a cell divides. Now she and her colleagues are finding links between telomere shortening and chronic diseases of aging. During his talk Collins served up another possible connection between telomeres and aging.

Collins and collaborators found the mutation that causes Hutchinson-Gilford progeria syndrome — a single-letter mistake in the genetic code. The mutation causes a splicing error in the genetic blueprint used to make one of the cell’s important structural proteins.  Instead the cell makes an abnormal protein — called progerin — that messes up the cell’s orderly structure, and the mess just gets worse every time a cell divides to make daughter cells. 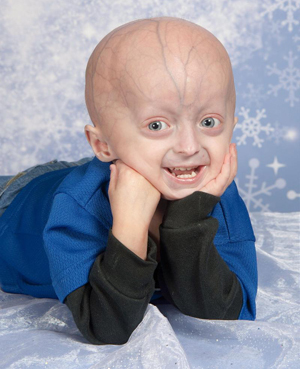 In progeria, this happens in all cells. After several generations daughter cells become misshapen. Individual cells senesce faster than normal. The overall potential for cells to undergo cell division is abnormally limited.

Fortunately, Collin’s research team identified not only a cause, but also a treatment -- an off-the-shelf drug developed to treat cancer but which was never successful for that purpose. Now a three-year clinical trial in which 28 children are being treated with the drug is ending, and during his symposium talk Collins said the yet-to-be published results are “encouraging.”

But in one of those expansive, “I hate to ruin your morning,” moments, Collins went on to present evidence that progerin is being made by a fraction of cells in all of us as we age, albeit in much less dramatic fashion.

Rather than being caused by any deadly genetic mutation we are born with, these more leisurely cellular breakdowns might involve a loss or shortening of protective telomeres, Collins suggested. Collin’s lab team found that in cells growing in the lab, when they used a chemical to un-cap the chromosome ends, it altered gene splicing and led to progerin production and cellular senescence.

“It’s clear that progerin turns on as a cell is approaching senescence,” Collins said.

“It’s not ubiquitous low-level expression.” In cells that are affected, he said, “The cells make almost as much as in a patient with the disease.”

“While I can’t prove it, it seems likely that progerin itself is part of normal, programmed senescence,” Collins said. “If we understood that, maybe we would be able to come up with a strategy to deal with the process of normal aging.”

Blackburn’s lab team recently completed an analysis of telomere length in more than 100,000 individuals as part of a joint genotyping collaboration between UCSF and Kaiser Permanente’s Research Program on Genes, Environment, and Health (RPGEH). Perhaps researchers will want to revisit the Kaiser patient cohort and ask for some skin, to see whether telomere length is associated with progerin.