For a sperm cell, a lot has to go right before it can fertilize an egg. And despite biblical stories of barren women and cultural traditions of blaming the female, fertility experts now estimate that male infertility — and sperm — figure into the equation for about half of couples who fail to conceive despite trying for a year or more.

Sperm cells, which scientists call spermatozoa — from the Greek words for seed and animal — may be too few in number or immature. They may be stranded before they get to the egg. They may fail in their final push to penetrate the egg’s protective vestments. 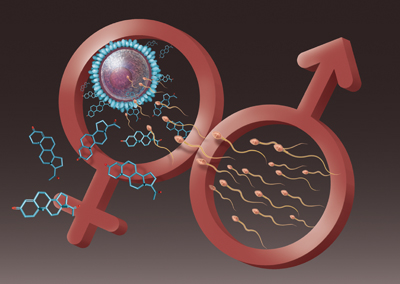 Spermatozoa now are getting more attention from scientists. Researchers are making strides to better understand how healthy sperm advance through the female reproductive tract and how one lucky gamete that makes the journey up the fallopian tube delivers its DNA to the egg.

The unfertilized egg has a protective coat that appears to spurn many sperm cell suitors. However, the retinue of cells surrounding the egg within the follicle actually assists sperm by secreting the hormone progesterone. Among other tasks, progesterone prepares the uterine wall for pregnancy. But the biochemical interactions between progesterone and sperm are very different from those that govern the hormone’s effects in women, and have been a mystery for two decades.

UCSF’s Yuriy Kirichok, PhD, is among the scientists riding a wave of recent sperm discoveries. Kirichok’s lab group now has shown how progesterone initiates a process that leads to the “hyperactivation” of the sperm cell’s whip-like tail and to the release of enzymes from a cap on the sperm head. Both these events help the ultimate winner of the fertilization sweepstakes to penetrate the egg’s membrane barrier — permitting delivery of a father-to-be’s DNA. 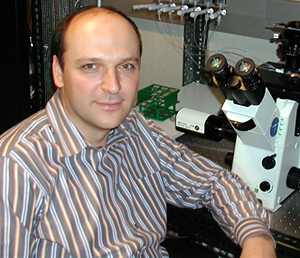 This remarkable effect of progesterone on sperm seems stranger still when one considers that mice — not-so-distant relatives to human in terms of evolution — do not seem to require progesterone for sperm activation, according to Kirichok.

Kirichok and colleagues found that progesterone is a key that opens a gated channel on spermatozoa formed by proteins called CatSpers. Progesterone unlocks the channel gate to immediately permit entry of electrically charged calcium atoms. The calcium influx in turn leads to a biochemical chain of events that readies the sperm cell for its final drive toward the unfertilized egg – scientifically known as the oocyte.

“Progesterone acts differently on sperm cells than it acts on other types of cells, including the oocyte,” Kirichok says.

Unlike the immediate response to progesterone that occurs in spermatozoa, in other cell types progesterone crosses the cell’s outer membrane, enters the nucleus and binds to a nuclear receptor protein that controls gene activation. This process of switching on genes to make proteins can take hours, Kirichok says.

One illustration of the difference, according to Kirichok, is that a potent antagonist of the nuclear progesterone receptor, RU486, a drug used in combination with misoprostol to terminate early pregnancy, does not affect activation of the CatSper channel by progesterone.

Because the way progesterone acts on sperm is so different from how progesterone acts hormonally, Kirichok says, it ought to be possible to pharmacologically disrupt the process by targeting the channel with a new type of birth control – and at the same time avoid side effects experienced by women who use birth control pills made with synthetic forms of progesterone. A pill taken by women probably would have the greatest chance for success, he says.

Kirichok already has identified drug candidates that specifically inhibit the CatSper channel. Based on his research he also says that certain beta-channel blockers used to treat heart disease may cause infertility by binding to CatSper.

Kirichok and colleagues identified the gated channel in mice first, and later in humans, after refining a technique, called patch clamping, first made famous in scientific circles by Nobel-Prize-winning research on electrical conduction within nerve cells. With patch clamping, a glass pipette, a tiny electrode and a voltage source are used to measure electrical currents in cells. 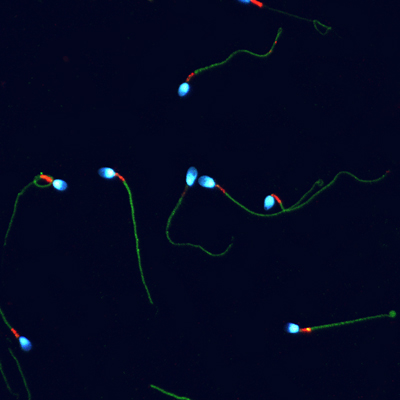 A few years ago Kirichok mastered patch clamping in sperm cells, which are very small and difficult to work with compared to most cells, including nerve cells.

Last year Kirichok’s lab group used patch clamping to unearth another mystery of sperm. Sperm are immobile until they get into the female reproductive tract. A change in pH from acidic to alkaline inside the sperm cell must occur for the tail to move and to start the sperm swimming toward the egg.  Kirichok identified another channel that performs this task by pumping positively charged protons out of the cell. Hyperactivation of the tail, comes later, when the sperm is closer to the egg and its progesterone-secreting handmaidens.

Kirichok’s recent sperm discoveries are highlighted in the scientific journal Nature and reviewed in Molecular Human Reproduction. Other scientists also have reported major discoveries that bear on infertility and birth control in recent weeks.

UC Davis researchers led a team which found that perhaps one-quarter of men worldwide may carry two copies of a defective gene for DEFB126, a protein they described as a “Klingon cloaking device” that helps sperm to swim through mucus and evade a woman’s immune system to reach the egg.

Scientists from the Imperial College of London led an international study that resulted in the identification of a sugar molecule called SLeX, which coats the egg and allows the sperm cell to stick to the egg as it tries to work its way inside. The researchers say studies of SLeX may shed more light on infertility.

“With the sperm patch-clamp technique, we for the first time have an opportunity to study the interaction between sperm and the female reproductive tract on the molecular level,” Kirichok says.

“With more and more labs adapting this technique, I can predict that we are entering a golden age of understanding of sperm physiology and sperm-egg interaction during fertilization.“