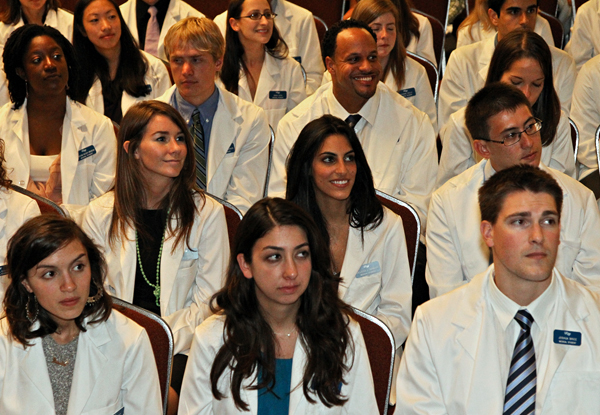 The new UCSF medical school Class of 2015 received their first white coats at an annual ceremony at UCSF Mission Bay on Sept. 9.

Sam Hawgood, MBBS, dean of the UCSF School of Medicine, gazed down at the expectant faces of 167 brand-new medical students ready to embark on a journey that he began more than four decades ago. The annual White Coat Ceremony would mark their rite of passage.

“I myself have been a physician and a scientist for the last 36 years and never for one day have I regretted making that decision,” said Hawgood, addressing the crowd that packed the Mission Bay Conference Center on Sept. 9.

He said UCSF would hand the incoming students the best tools science has to offer. “But the most important lessons will come not from the faculty but from each other and, more importantly, your patients,” he said.

“I have been doing this for four years and I haven’t gotten to say Australia once,” said Hawgood, an Australian native.

The 167 new arrivals were chosen from 6,767 applicants. The average age of the class is 25, with a range of 21 to 34, and it is 58 percent female and 42 percent male. Twenty-three percent of the students belong to racial and ethnic groups underrepresented in medicine. Sixteen students are from the UC Berkeley-UCSF Joint Medical Program.

Larry Hill, MD, immediate past president of the Medical Alumni Association, told the class that choosing medicine and UCSF was one of the most important decisions they would ever make. In a mere 45 months, he said, many would earn the title of doctor.

“I entered medical school in September 1963,” Hill told the students. “And my mother said, ‘Don’t get too cocky. Remember a butcher wears a white coat, too.’ ”

Then Associate Dean of Students Maxine Papadakis, MD, introduced the advisory college mentors who would take turns putting on the students’ coats and told the roomful of people, “This is one of those ceremonies in which you are invited to make noise.” 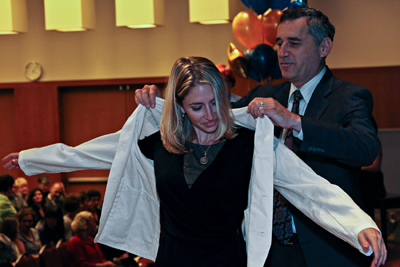 And they did. As the students took the stage in alphabetical order to be “coated” and shake hands with Hawgood and Catherine Lucey, MD, vice dean of education, their friends and relatives cheered and whooped. Camera strobes kept flashing and one person yelled “Go Bears” as a Cal graduate crossed the stage. There were lots of extremely high heels and one pair of flip-flops. There was also music: A second-year medical student played the violin softly while a classmate accompanied her on the piano.

Some people in the audience were neither family nor friends of the medical students. They just wanted to be there.

“I like to come because it inspires me,” said Nancy Milliken, MD, vice dean of the medical school and director of the UCSF National Center of Excellence in Women’s Health.

When all the students were wearing their coats – a process that took an hour and 12 minutes –Lee Atkinson-McEvoy, MD, of UCSF gave the keynote address.

“My white coat is a witness and a reminder of why I chose medicine,” she said. “... I wish all of you could see the view from up here. It is amazing.”

After the ceremony, new medical student Cleavon Gilman said, “I wanted to hug the dean but I just gave him a handshake. This is the beginning of another journey.”

Each student could have said the same thing, and each took a different route to get to UCSF. Gilman’s was harder than most.

The 32-year-old New Jersey resident grew up without health care. He said he never knew his father and his mother’s family cut her off for having a mixed-race child. Gilman, who has always stuttered, dropped out of high school partly because of his speech impediment and said he hung out with the wrong crowd.

Gilman spent more than five years in the Navy and was attached to the Marine Corps as a military medic, which led to a year in a sports medicine clinic in Japan and an eight-month tour of duty in Iraq in 2004, where he was stationed in a surgical unit, then with an explosives team and finally in a detention facility tending to prisoners.

“There was a mortar attack once and we had a lot of casualties. I had to pick up 20-year-olds and put them in body bags,” Gilman said. “I saw children killed and their moms. It changed who I was as a person.”

He worked with two doctors and a dentist in Iraq who took him under their wing and convinced him that he was smart enough to be a physician himself. So, he enrolled in a community college in San Diego County, transferred to UC Berkeley and did post-bachelor’s work in physiology after graduating from Cal.

“I used to let my speech impediment control me,” Gilman said. “But I can’t do anything about it, and now it kind of adds to who I am. I’ll get it out eventually. And I am so fired up to be at UCSF.”

Growing Up Around Medicine

Gelareh Nikpour, 28, also pursued another path before deciding on medicine as a career. After graduating from UCLA, she volunteered for two years with Teach for America, a national teacher corps that deploys recent undergraduates to instruct low-income students. She taught middle-school students in Brooklyn with learning disabilities.

“I wanted to promote real change in their lives, but there were so many outside factors that kept me from doing my best,” Nikpour said. “It was a little disillusioning and I didn’t want to become jaded.”

She was born in Iran but left at age 3 with her family. “It was during the Iran-Iraq War,” she said. “I remember the sirens would go off in emergency scenarios.” 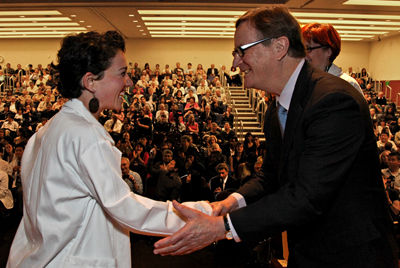 After receiving her white coat, medical student Yakira Teitel receives a "welcome to medical school" greeting from Sam Hawgood, dean of the UCSF School of Medicine.

The family moved to Orange County, followed by Nikpour’s grandparents, who spent a lot of time in the hospital. It was a place where she felt completely at ease. Medicine was always tempting as a career, but she didn’t take science classes and figured, by the time she’d reached her mid-20s, that it would be too late to change course.

“As a teacher, I was telling my students that they could do anything they put their minds to,” Nikpour said. “At some point I started believing it myself.”

She took some science classes and discovered her brain liked science more than she would have expected. Then she did a two-year pre-med program at USC and applied to medical school. UCSF was her top choice.

“I got just a really friendly vibe from both physicians who interviewed me,” said Nikpour, who became a U.S. citizen at age 17 and visited Iran in 2002 and 2007. “One spoke to me for almost an hour, and we talked mostly about our lives and our travels.”

Erik McDonald, 26, also grew up comfortable around medicine. He was raised in the Merced County town of Atwater by a father who was a firefighter in the Air Force and a mother who was a pediatric nurse-practitioner. Doctors and clinics were always part of his life, but he wasn’t drawn to a medical career.

“I was a horrible student,” he said. “I liked skateboarding, and then I started racing cars.”

McDonald eventually enrolled at UC Berkeley as a transfer student, majoring in mechanical engineering. He worked in a laboratory doing biomechanical research that led to a job at UCSF, mostly at San Francisco General Hospital designing orthopedic products.

“We could work with the surgeons,” he said. “It was awesome and it gave me a chance to see what the lifestyle was like. We worked all the time but it didn’t seem like work.”

And he can already see the similarities between car-racing and medicine. “In racing there is such concentration,” McDonald said. “It’s a really fine balancing act between focus and finesse.”

Both Sides of the Brain

Valeria Carcamo-Cavazos, 25, also will harvest parts of her past to help create a future in medicine. She and her family left Mexico City when she was 9 because Chile, where her father grew up, seemed safer. At age 14, she moved to Washington state.

“My background will definitely help me,” she said. “Anytime you’re able to adapt or to overcome a problem, you trust yourself. Coming from another country helps me appreciate how many opportunities I have in the United States. There are places where it’s hard for people to get the education I’m getting here.”

When she was very young, she wanted to be a whale trainer. She’d also gravitated to art. During college at Cornell University, however, Carcamo-Cavazos decided to major in biology. After graduation, she worked for a start-up for six months and then became a staff research assistant at Stanford University in hematology and breast cancer.

“I want to be a doctor because I like the idea of patient interaction,” she said. “You get to see the concrete results of what you’re working for. That’s the immediate gratification. But you can also pursue science on the side.”

At the end of the White Coat Ceremony, Hawgood told the Class of 2015: “You must always remember than medicine is more than just science. … It takes both sides of the brain to be a true doctor.”

The students filed out and went down to the first floor, where their white coats glowed in the light of the atrium as friends and family joined them.

Walter and Julie Empson, from Washington, D.C., looked down at the scene from the balcony above. Their daughter, Princeton graduate Susannah Ford Empson, is a member of the Class of 2015. She was the one wearing flip-flops and had just returned from two months of work in rural Sierra Leone.

“When it ended, I was left with the impression of humility, from a university that is so well known and universally admired,” Walter Empson said. “They are serving these young people.” 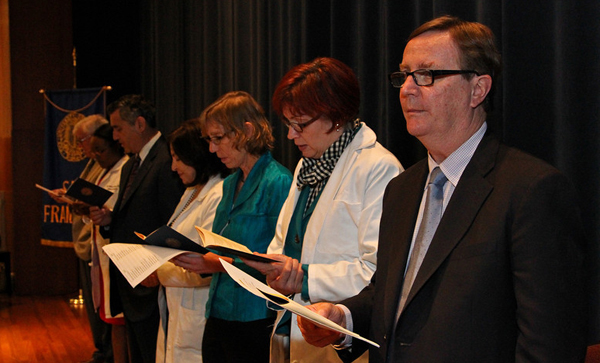