A scientist at the Gladstone Institutes has discovered how a gene known as SIRT3 contributes to a suite of health problems sweeping across America, offering new insight into how to combat these potentially fatal conditions. 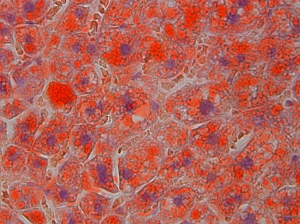 A normal group of cells. Fat deposits are stained in red. Click for full size. 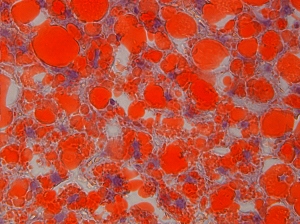 Cells in which the SIRT3 gene has been switched off. Fat deposits are stained in red. Click for full size.

In a paper being published today in Molecular Cell, Gladstone Senior Investigator Eric Verdin, MD, a professor of medicine at UCSF, describes how SIRT3, when switched off, accelerates the build-up of fats throughout the body. This can lead to obesity, high blood pressure and a decreased ability to process sugar — the combination of which is known as the “metabolic syndrome.” Metabolic syndrome significantly increases one’s risk for developing heart disease and diabetes.

“Estimates indicate that one-third of Americans have the metabolic syndrome, and more develop it each year,” said Warner Greene, MD, PhD, who directs virology and immunology research at Gladstone, a leading and independent biomedical-research organization. Greene is also a professor of medicine, microbiology and immunology at the UCSF, with which Gladstone is affiliated.“By showing how the absence of SIRT3 can exacerbate obesity, Verdin’s group offers important clues concerning new ways to alleviate the symptoms of this American epidemic.”

To better understand the origins of obesity and this associated syndrome, Verdin and his colleagues deactivated, or turned off, the SIRT3 gene in laboratory mice. They then fed the mice a high-fat diet and observed the animals’ response at a molecular level.

Normally, SIRT3 sets off a complex chain of events to transform fat into energy at the cellular level. But deleting the SIRT3 gene disrupted this chain, and fat deposits weren’t broken down as they should have been.

Verdin further found that prolonged intake of a high-fat diet, even in normal mice, can itself reduce the activity of the enzyme produced by SIRT3—an enzyme his laboratory originally discovered. The reduction in enzyme activity, in turn, leads to further fat build-up in places such as the bloodstream and liver. Over time, this build-up can lead to obesity, high blood pressure and insulin resistance. 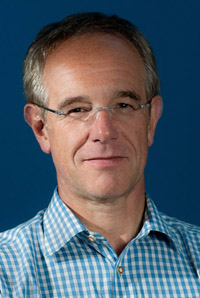 Verdin and his colleagues also analyzed the SIRT3 genes of 8,000 Finnish men. This analysis pinpointed a single SIRT3 gene mutation in 30% of the men. When present, the mutation reduced SIRT3 activity and increased risk for developing the metabolic syndrome.

“Finding a SIRT3 gene mutation linked to metabolic syndrome is a big step towards developing treatments for this increasingly common collection of obesity-related illnesses,” said Verdin, who is also a UCSF professor of medicine. “In the future, we hope to examine whether increasing SIRT3 activity can help decrease the symptoms of metabolic syndrome. We are also working to identify new drugs that can enhance the SIRT3 enzyme. Such drugs could be used in the future to stem the tide of the metabolic syndrome and its many complications.”

Other scientists who participated in the research at Gladstone include Matthew D. Hirschey,Tadahiro Shimazu,Carrie A. Grueter, Amy M. Collins,Bjoern Schwerand Robert V. Farese, Jr. Funding came from a wide variety of organizations including the Sandler Foundation, the Elison Medical Foundation, and the National Institute of Diabetes and Digestive and Kidney Diseases.

Verdin is a senior investigator at the Gladstone Institute of Virology and Immunology. His Gladstone lab explores how the modification of proteins plays a role in regulating biological systems.

Gladstone is an independent and nonprofit biomedical-research organization dedicated to accelerating the pace of scientific discovery and innovation to prevent illness and cure patients suffering from cardiovascular disease, neurodegenerative disease, or viral infections. Gladstone is affiliated with the University of California, San Francisco.