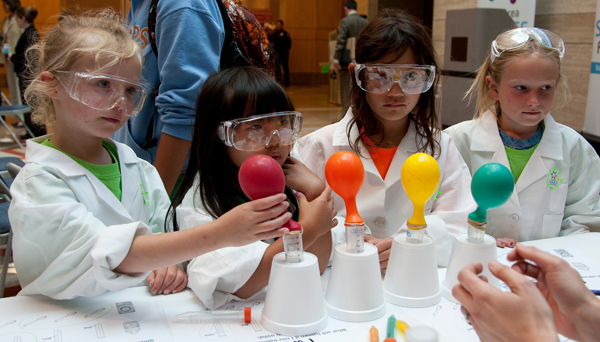 From left, Sonya Haymaker, Megan Pun, Jessica Rice and Elizabeth Holcombe from UCSF Camps learn about gases during demonstrations in Genentech Hall at the kick-off event on Tuesday for the upcoming Bay Area Science Festival, which will run from October 29 and November 6 at many locations throughout the Bay Area, including UCSF.

Not only is the advancement of science and technology fundamental to improving human health and quality of life, it is also crucial to maintaining the nation’s leadership in a global economy.

And while the US continues to grapple with a frail economy, those gathered in Genentech Hall at UCSF Mission Bay on Tuesday focused on science and technology as critical to the nation’s employment and economic growth.

Pelosi, who has represented California's 8th District in the US House of Representatives since 1987, is recognized as a great friend to UCSF and one of the strongest supporters of scientific research in Congress.

On a tour at UCSF, Democratic Leader Nancy Pelosi dons 3-D glasses at UCSF'S Resource for Biocomputing, Visualization and Informatics center that uses specialized software to show spatial interaction of viruses, such as HIV, proteins and DNA, at the molecular level. Directed by Professor Tom Ferrin, left, the center fosters interdisciplinary collaboration among scientists from many different groups around the world. Kishore Hari, coordinator of the Bay Area Science Festival, joined the tour.

The Bay Area Science Festival, which will run from October 29 to November 6, 2011, offers people of all ages and backgrounds more than 100 mostly free opportunities to learn about the scientific progress and technological advances that has made the Bay Area an international center of innovation and ingenuity.

“San Francisco is known as a place for big ideas, where entrepreneurs and innovators, scientists and scholars contribute to the City's intellectual and economic vitality,” said Mayor Lee. “Today, we celebrate science and innovation – keys to our employment and economic growth – with the launch of the Bay Area Science Festival. Through this great event organized by the City with University of California, all members of our community can become inspired, get informed and experience first hand why science holds the key to our nation’s strength and success.”

As the lead institution of the Bay Area Science Festival, UCSF is at the epicenter of this scientific and technological revolution, garnering the most funds from the National Institutes of Health than any other public university, generating thousands of jobs and patents and fueling economic growth in San Francisco and beyond. 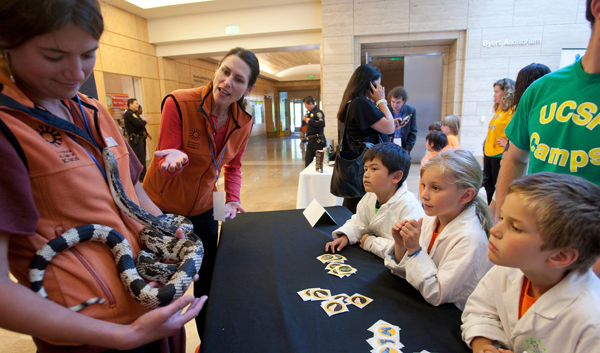 Vice Chancellor Yamamoto emphasized the power of UCSF: “Since the biotech industry began in 1977, UCSF alone has issued nearly 1,800 patents for biomedical science and technology, making it the second largest holder of US life science patents in the world. The discoveries that scientists are making right here will transform the world as we know it.”

Yamamoto, who led Mayor Lee on a tour of labs at UCSF Mission Bay, including one in which high school students were conducting research and another where scientists use specialized software to visualize and analyze complicated molecules in 3-D, said the time is right to showcase science in action.

“We are in an incredibly exciting time in science,” he said. “Some people are calling this the equivalent of the Industrial Revolution of biology; others compare it to the Renaissance. With the huge advances coming out of the Human Genome Project and discoveries in stem cell research, immunology and biological systems, we are truly on the cusp of a monumental change in how we understand and solve complex issues in health, energy and the environment.” 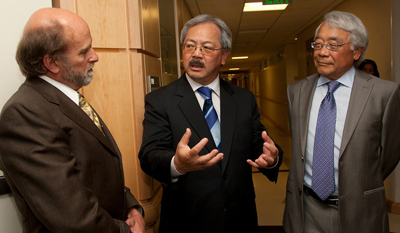 From left, Professor Tom Ferrin, San Francisco Mayor Ed Lee and Keith Yamamoto, vice chancellor for research at UCSF, talk about the remarkable research at UCSF Mission Bay. Ferrin, who came to UCSF in 1972, and Yamamoto, who started as a postdoc in 1973, reflected on the phenomenal growth of the University over the years. Lee recalled that he was director of the Department of Public Works when the infrastructure was put in place to make UCSF Mission Bay possible.

In addition to UCSF, the Bay Area Science Festival will bring together an unprecedented brain trust of the region’s academic and industry giants, including UC Berkeley, Stanford University, the California Academy of Sciences and Lawrence Livermore National Laboratory, to name just a few, in what could be one the largest science-based events in the US.

UCSF’s participation in the Bay Area Science Festival is part of a tradition of public service as showcased through its Science & Health Education Partnership (SEP), a 24-year program with the San Francisco Unified School District that serves more than 90 percent of San Francisco’s public schools.

UCSF’s Bruce Alberts, PhD, a prominent biochemist with a strong commitment to improving science and mathematics education, co-founded SEP and now serves as one of four principal investigators for the festival grant awarded by the National Science Foundation. He is also editor-in-chief of Science and a professor emeritus in the Department of Biochemistry and Biophysics at UCSF, to which he returned after serving two six-year terms as the president of the National Academy of Sciences.

"Through this great event organized by the City with University of California, all members of our community can become inspired, get informed and experience first hand why science holds the key to our nation’s strength and success.”

“At this time of national soul searching, those of us who are scientists and engineers need to do much more to help revive the traditional US sense of optimism about our nation’s future,” Alberts said. “We can best do this by opening up our laboratories and our workplaces to the community, and by otherwise reaching out to everyone, young and old, to provide direct exposure to the excitement of discovery that produces the ‘can do’ attitude inherent to our professions.”

During the week leading up to the festival’s grand finale, Discovery Day at AT&T Park on Sunday, Nov. 6, UCSF will open its doors to the public for provocative talks by scientists who will share the latest findings on fascinating topics.

“Young people especially need to see that there are an almost infinite number of ways in which their talents and energies can help America to build a better world, while simultaneously providing them with livelihoods," Alberts said. "Because of science and engineering, we remain a frontier nation. There are a huge number of unexplored frontiers that remain for the next generation, and great personal satisfaction can be derived from exploring them.”