Asthma rates in the United States are higher among African Americans and Latinos in comparison to European Americans, but the causes of asthma in all populations still are only poorly understood. 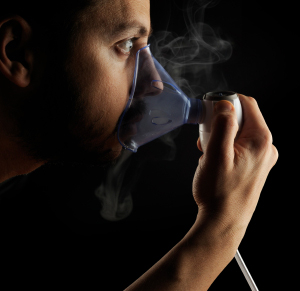 Researchers now have discovered a genetic variation associated with increased asthma risk in people of African ancestry — the result of a new DNA analysis spanning the entire genomes of thousands of asthma sufferers. The scientists also have confirmed an asthma association for four other common gene variations that came to light late last year in a large study of Europeans. The new study demonstrates that these genes appear to affect risk in other populations, as well.

The consortium of scientists who reported the findings online on July 31 in advance of print publication in Nature Genetics hail from nine independent research groups. They pooled and compared data from their own separate study populations to empower their statistical analysis.

The research collaborators discovered that a genetic variation in a gene called PYHIN1 was associated with about a 34 percent higher risk of asthma in African Americans and African Caribbeans. The variation is common in these groups — close to 30 percent of those with African ancestry inherited this variant. However the variation was not found in populations of European ancestry, and was present in only a few Latinos in the study.

Additional research will be required to pinpoint the specific DNA and biological mechanisms responsible for the associations discovered in the study.

Ethnicity and Genetic Risks for Disease

Most searches for genetic variations associated with elevated risk for specific diseases have been conducted with DNA from people of European ancestry. But according to UCSF’s Esteban Burchard, MD — a member of the consortium whose own asthma studies focus on Mexican American, Puerto Rican and African American populations — risk genes discovered in white populations should not be assumed to be similarly important in other populations. Some gene variations that elevate disease risk in one group may be absent or have little effect in another.

“There are population-specific risk factors for disease,” he says.

The consortium’s results highlight the value of studying the role of genetic variation in health and disease in diverse populations, according to the researchers.

Asthma arises due to both environmental exposures and genetic susceptibility. The disease is becoming more prevalent, according to the US Centers for Disease Control and Prevention. Reported incidence varies. About one in 13 European Americans has asthma. In contrast, about one in eight African Americans has the disease, and in Puerto Ricans the incidence is greater than one in six.

An increasing number of suspected asthma risk genes have come to light with the advent of genome-wide association studies (GWAS), made possible thanks to technological advances that permit ever-more-rapid DNA analysis and comparison. To track down genes that may be involved with disease risk, scientists use markers of known DNA variation — over two million of them for this study – spaced throughout the human genome.

The scientists compiled genomic data from 5,416 people with asthma who participated in GWAS in North America, including European Americans, African Americans and African Caribbean, and Latinos, as identified by the research participants themselves. From these same groups, DNA from thousands of additional individuals without asthma was used for comparison.

After obtaining initial results, the scientists repeated their analysis using independent data encompassing genomic DNA from different sets of individuals, to confirm that common variations in the five genes were significantly associated with asthma and that the initial findings were not due to chance.

Dara Torgerson, PhD, the lead author of the study, began her work on the project at the University of Chicago, along with Carole Ober, PhD, and Dan Nicolae, PhD, the senior scientists on the study, but she completed her efforts during a year spent working in Burchard’s lab at UCSF. Torgerson coordinated the preparation of the data for analysis, quality control, and the analysis itself.

“This is just the tip of the iceberg,” Torgerson says. “There are other genes and other populations scientists will be looking at.”

In follow-up studies Burchard will look for genetic variants associated with different aspects of asthma, such as asthma severity, lung function and biomarkers for asthma that can be measured in the lab.

There are both medical and scientific reasons for studying diverse populations in the search for genetic variations that affect disease risk. It’s too early to predict that these new discoveries of genes that elevate asthma risk will lead to further discoveries, treatments or tests that will be useful in medicine. However, if gene variants or their associated proteins become the focus of screening tests to gauge disease risk or the targets of new drugs, it’s important to know who is likely to benefit.

While the ultimate aim of this type of research is personalized medicine that benefits people of all ethnic backgrounds, some critics have expressed concerns about the association of genes with racial groups, thinking that it will lead to a genetic profiling or definitions of race that ultimately will foster prejudice.

But estimates of disease risk or treatment outcome based on a statistical likelihood that someone carries a specific genetic variation that is more common in a particular ethnic group may prove useful in deciding whether that individual is likely to benefit from a test or treatment.

“Until you start genetically testing everybody, that’s what we’re left with to hedge our bets,” Burchard says.

Geneticists who study human populations assert that on average the “genetic architecture” of the genome still differs among people whose ancestry is primarily European, Asian or African, an artifact of migration and settlement, and periods of geographic isolation and rapid population growth and contraction over the course of human history.

There is much more genetic variation among African populations than among European populations, for instance. These differences offer a strategy that can sometimes aid in the identification of DNA variations that affect disease risk, Torgerson says.

One genetic feature of sexual reproduction is that DNA on chromosomes is split apart and exchanged with DNA on matching chromosomes. This means that bits of genomic DNA that are close together on a chromosome are more likely to be inherited together.

The blocks of DNA that have been inherited together through generations tend to be larger in Europeans and smaller in Africans. As a result, genome-wide studies that rely on the markers of DNA variation that are commercially available on “chips” used to probe DNA samples may be more likely to result in the identification of risk genes in studies of European populations.

If the genome were a highway of DNA, the markers used in GWAS would be like the mileposts along the highway. Because there are lengthy gaps between markers, associating a marker with disease risk does not pinpoint the DNA variation actually responsible for the risk. A marker is more likely to be inherited together with the actual DNA variation responsible for the disease risk when the inherited blocks of DNA are longer.

When the blocks of DNA are shorter, the DNA corresponding to the marker and the DNA that is the actual source of the disease are more likely to be separated so that the marker fails to detect an association, especially in studies that rely on smaller numbers of individuals.

On the other hand, once researchers have determined that there is likely to be a risk gene near a specific marker, it can be easier to home in on the actual DNA responsible when the blocks of DNA inherited together are smaller, as they tend to be in African populations.

Of course, this strategy assumes the disease-associated variant being tracked is present in both populations. As the power of genome-wide association studies increase it is likely that more uncommon genetic variants will be associated with disease risk. But these less common variants also are less likely to be present in all populations, according to Burchard.

The consortium’s research has been funded through the American Recovery and Reinvestment Act (ARRA) and by the National Institutes of Health.