A UCSF institute aimed at accelerating the pace of translating science into real-life solutions for patients has received $112 million from the National Institutes of Health to expand its work over the next five years. 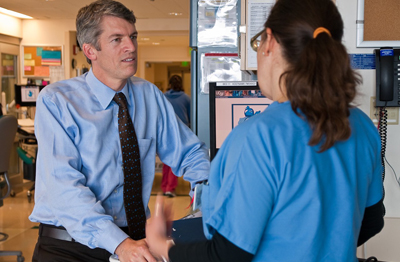 Together, the institutes represent a $498 million renewed commitment on NIH’s part to expedite translational research nationwide. UCSF received the largest of the renewal grants and remains the country’s second-largest clinical and translational science institute.

“These institutes were the pioneers in this program and are to be commended for the work they have done in bridging the traditional divides between laboratory research and medical practice,” said Barbara Alving, MD, director of the NIH’s National Center for Research Resources, which administers the CTSA program. “They were tasked with transforming the way their institutions coordinate research to make it more proactive and effective in producing real-world results, and in the process, they have served as innovative models nationwide.”

NIH will release a progress report on the program in August, highlighting research that has emerged from UCSF and other institutes in the CTSA consortium.

The renewal awards validate the success of CTSI and its sister programs in creating a framework for scientists to move beyond the traditional silos of science to collaborate on promising research and find the training and resources to move those projects ahead.

The UCSF institute has focused on creating resources at all levels of that spectrum, from fundamental biological research to industry partnerships, clinical trials and clinical research. The renewed funding will expand and enhance those programs, while also supporting CTSI’s efforts to take those advances one step further to ensure they reach the community.

“UCSF is known for both outstanding fundamental research and for the level of care it provides to patients who are in greatest need,” said UCSF Chancellor Susan Desmond-Hellmann, MD, MPH. “CTSI is helping us create that ‘secret sauce’ to help connect these two communities and deliver the breakthroughs that patients need throughout the world.”

The size of UCSF’s renewal underscores its leadership role across the 60 institutes that have been created through the NIH program, as well as the value of CTSI projects that will be rolled out under the new funding.

CTSI was among the first seven of these institutes nationwide and was the largest when it received its initial 2006 grant award, totaling more than $109 million. Since then, the institute has enabled UCSF to create an extensive network of training and support for researchers to help bridge the gaps between laboratory science, clinical care, and improvements in health.

“UCSF is an incredible place, with superb basic science and also groundbreaking clinical research and care,” said UCSF neurologist and CTSI Director S. Claiborne “Clay” Johnston, MD, PhD. “The great collaborative spirit of UCSF has made bridging the gap between these two types of research very doable. It has been exciting to think through how we might best facilitate our great faculty and to see some early evidence of success.”

Research acceleration happens in a variety of ways, including identifying and addressing challenges that affect successful clinical research, such as the failure to recruit study participants. In response CTSI developed the UCSF Participant Recruitment Service, which will begin a pilot program later this summer.

“One of the greatest challenges clinical investigators face is finding enough people to enroll in studies,” said Bill Balke, MD, director of CTSI’s Clinical Research Services. “This program, the first of its kind at UCSF, will give researchers the tools and support they need to find and enroll study participants.”

Another key obstacle is funding. CTSI has awarded $4.5 million in pilot awards over the past four years, distributed across UCSF’s four professional schools — dentistry, medicine, nursing and pharmacy — and will continue to support early-stage, or T1, research through a newly launched program, known as the T1 Translational Catalyst Award. That program helps researchers understand where their research stands in terms of commercial viability and pairs them with teams of academic and industry consultants to resolve critical obstacles early in the research process.

The institute also has created a comprehensive Consultation Service, the busiest of its kind across the national consortium, which matches researchers to faculty who help them address study design, complex biostatistics and a range of specialized research needs.

Beyond expert advice and funds, CTSI’s Clinical Research Services has helped advance clinical research at UCSF by providing integrated services at eight adult and pediatric sites across the San Francisco Bay Area, ranging from nursing staff to sample processing and participant recruitment. The service has supported more than 1,500 UCSF and affiliated doctors in applying research advances to clinical practice.

Among the future projects are opportunities for UCSF scientists to collaborate with UC Berkeley to capitalize on its complementary strengths in engineering and business. CTSI is also launching strategic initiatives, such as a program that leverages community partnerships and research at UCSF to achieve measurable improvements in health for the San Francisco Bay Area.

Over the next five years, the UCSF institute will capture and relay key statistics on return on investment (ROI) and other metrics of success to expand not only its programs, but its ability to share progress rigorously and transparently. The institute will also share the software and other programs it has developed with the national network of institutes.

To learn more about CTSI, including its research services, funding resources, and key initiatives, visit http://ctsi.ucsf.edu/about. Further information on the CTSA program can be found at www.ncrr.nih.gov/ctsa.