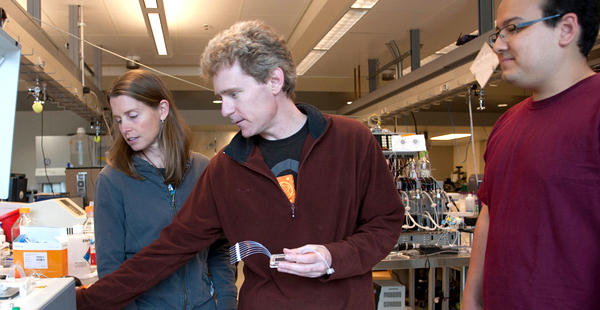 Working in the lab, from left, are Michelle Flenniken, a postdoctoral scholar, Joseph DeRisi, PhD, a Howard Hughes Medical Institute investigator and professor of biochemistry and biophysics at UCSF, and Charles Runckel, a graduate student.

A 10-month study of healthy honey bees by University of California, San Francisco (UCSF) scientists has identified four new viruses that infect bees, while revealing that each of the viruses or bacteria previously linked to colony collapse is present in healthy hives as well.

The study, which followed 20 colonies in a commercial beekeeping operation of more than 70,000 hives as they were transported across the country pollinating crops, was conducted to answer one basic question: what viruses and bacteria exist in a normal colony throughout the year?

The results depict a distinct pattern of infections through the seasons and provide a normal baseline for researchers studying a colony – the bee population within a hive – that has collapsed. Findings are reported in the June 7 issue of the Public Library of Science ONE (PLoS ONE). 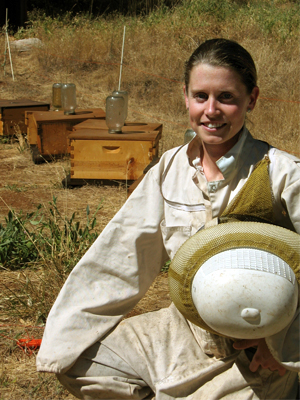 The study tracked 27 unique viruses that afflict honey bees, including four that previously were unknown and others proposed as causes of the Colony Collapse Disorder that has been wiping out colonies for the past five years, according to senior author Joe DeRisi, PhD, a Howard Hughes Medical Institute investigator and professor of biochemistry and biophysics at UCSF.

“We brought a quantitative view of what real migrating populations look like in terms of disease,” DeRisi said. “You can’t begin to understand colony die-off without understanding what normal is.”

Because the colonies in this study remained healthy despite these pathogens, the research supports the theory that colony collapse may be caused by factors working alone or in combination, said Michelle Flenniken, PhD, who jointly led the research.

“Clearly, there is more than just exposure involved,” said Flenniken, a postdoctoral scholar in the laboratory of UCSF microbiologist Raul Andino, PhD. “We noticed that specific viruses dominated in some seasons, but also found that not all of the colonies tested positively for a virus at the same time, even after long-distance transport in close proximity.”

Honey bees are critical to U.S. agriculture, which depends upon them to pollinate 130 different crops, representing more than $15 billion in crop value each year and roughly one-third of the human diet, according to the U.S. Department of Agriculture.

For the California almond crop to be successfully pollinated, DeRisi said, roughly half of the honeybees in the country – about 1.3 million honeybee colonies – must be in the Central Valley by the first week in February, when the trees begin to bloom. That need is echoed throughout the country, as different crops come due for pollination, resulting in semis traversing the nation for most of the year, each bearing hundreds of hives.

Since 2006, however, the bee industry has reported a mysterious phenomenon involving the sudden disappearance of most of a hive’s worker bees, which leaves the queen and young bees without enough workers to support them. The disorder is one factor in the growing decline of U.S. honey bees – an estimated 30 percent of the population is lost each year and some beekeeping operations cite 90 percent losses, the USDA reports. 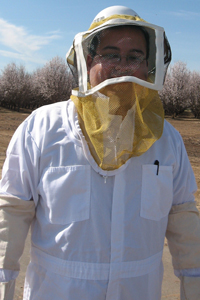 Researchers nationwide have identified various possible causes of that collapse, mainly based on pathogens found in the affected hives. While this study did not identify the cause of colony collapse, it did offer a measurement of the normal levels of pathogens.

In addition to viruses, the research revealed six species each of bacteria and fungi, four types of mites and a parasitic fly called a phorid, which had not been seen in honey bees outside California. One of the new viruses, a strain of the Lake Sinai virus, turned out to be the primary element of the honey bee biome, or community of bacteria and viruses.

“Here’s a virus that’s the single most abundant component of the bee biome and no one knew it was there,” DeRisi said, noting that hundreds of millions of these viral cells were found in each bee in otherwise healthy colonies at certain times of the year.

Flenniken jointly led the work with doctoral student Charles Runckel, in DeRisi’s lab. The team used a broad range of molecular detection tools for the study, including gene sequencing and a custom-designed microarray to detect insect pathogens. The microarray was designed using the same principles used for detecting human viruses, which DeRisi pioneered with UCSF professor Donald Ganem, MD. It was built in the Center for Advanced Technology on the UCSF Mission Bay campus.

The research was primarily funded by Project Apis m., which includes members of the American Honey Producers Association, the American Beekeeping Federation, the National Honey Board, California State Beekeepers Association and California almond farmers. DeRisi is supported by the Howard Hughes Medical Institute. Flenniken’s research was supported by the Häagen Dazs post-doctoral fellowship in honey bee biology, through University of California, Davis. Other funding sources and data can be found in the full paper.