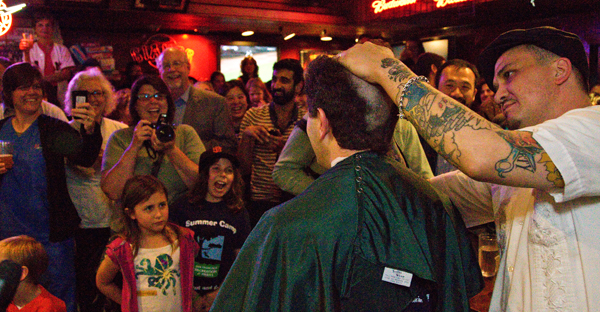 UCSF pediatric cancer specialist Benjamin Braun, MD, PhD, gets his head shaved as the crowd looks on during a fundraising event on June 8.

It looked like a typical Wednesday evening in San Francisco’s Kezar Pub on June 8, as locals gathered to unwind after work and watch the Stanley Cup Playoffs. But walking into the bar’s dimly lit back room brought a whole new energy and a different crowd, with more than 100 people crammed into the small space to take part in a very atypical fundraiser. 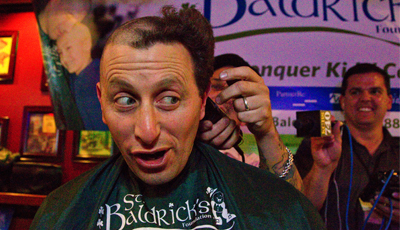 Benjamin Braun reacts to his new ‘do.’ “This is going to help Ben cure leukemia,” joked Kate Matthay, MD, as Braun’s locks were shed. “Now he can finally think clearly.”

In a bold demonstration of support for the many children with cancer they have treated over the years, several UCSF Benioff Children’s Hospital doctors, as well as hospital staff and community members, had their heads shaved bald to raise money and awareness for childhood cancer research. Over the course of the evening, a dozen people lined up to have their turn in the makeshift barber’s chair and watched as their locks fell in clumps to the floor amid onlookers’ cheers.

“I’ve often had to tell my patients that their cancer treatment will make them lose their hair, but it will grow back. And yet, I’ve never really known how it feels to hear those words,” UCSF pediatric cancer specialist Jason Law, MD, said just before losing his thick dark hair. “Today, I understand just a little more.” 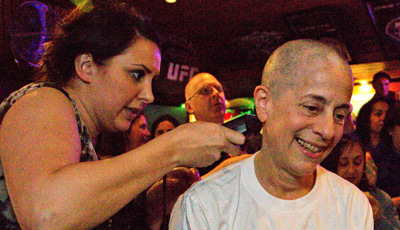 The event raised $30,000 for the St. Baldrick’s Foundation, a nonprofit organization that hosts worldwide events where volunteers collect pledges and shave their heads to support kids with cancer. Since 2007, the St. Baldrick’s Foundation has given $770,000 in grants to support UCSF’s clinical and basic cancer research programs, with several hundred thousand more expected through future awards.

“We have all been touched by cancer, and we have all known someone affected by this disease,” said Kate Matthay, MD, chief of pediatric oncology at UCSF Benioff Children’s Hospital and the only woman to have her head shaved that evening. “We are here today to honor those people who have had their lives cut short because of cancer and to stand in solidarity with our brave young patients who continue fighting this disease.” 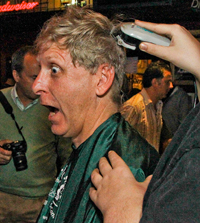