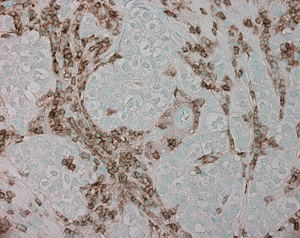 This micrograph shows a human breast cancer stained for all the immune cells (brown) in the tumor (blue/green).

A team of researchers at the University of California, San Francisco (UCSF) has discovered a new way to predict breast cancer survival based on an “immune profile” – the relative levels of three types of immune cells within a tumor. Knowing a patient’s profile may one day help guide treatment.

Moreover, the UCSF team showed that they could use drugs to alter this immune profile in mice. Giving these drugs to mice, in combination with chemotherapy, significantly slowed tumor growth, blocked metastasis and helped mice live longer, suggesting that the approach may work in people.

According to UCSF Department of Pathology Professor Lisa Coussens, PhD, who led the research, a clinical trial for women with advanced breast cancer based on this discovery should begin enrolling patients at the UCSF Helen Diller Family Comprehensive Cancer Center and two collaborating institutions later this year.

“If our work translates into the clinic,” said Coussens, “it may improve the effectiveness of chemotherapy in the treatment of certain cancers.”

A research article describing this discovery appears in the inaugural issue of the journal Cancer Discovery today. Coussens also is presenting the results at the American Association for Cancer Research meeting in Orlando, FL this week.

Why Isn’t The Body Immune To Cancer?

Breast cancer continues to be a major health problem in the United States, and the National Cancer Institute estimates more than 200,000 Americans are diagnosed with the disease every year. It is the second leading cause of cancer death among American women, claiming more than 40,000 lives in 2009 alone. 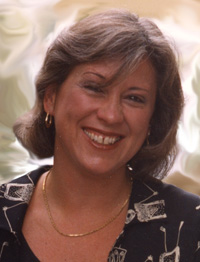 Basic cancer research at UCSF, and elsewhere across the country, seeks to address this problem by asking fundamental questions about the disease. A few years ago, Coussens and her colleagues were doing just that, wondering: Why isn’t the body more immune to cancer?

Scientists have known for years that the immune system is closely linked to cancer because it naturally keeps cancer in check – or at least it’s supposed to. The body is filled with immune cells that seek out and destroy tumors, but those cells often prove ineffective at controlling cancer completely. Moreover, certain types of cancer can actually co-opt immune cells and use them to help tumors grow.

Normally the immune system protects the body by unleashing on tumors an immune cell called a killer T cell. This cell is effective, but dangerous. It can shrink tumors, but it also can damage healthy tissue. So the immune system uses another type of immune cell, called a macrophage, to control killer T cells, calling them where needed and shutting them down to keep them from damaging healthy tissue.

Coussens and her colleagues found that some cancers subvert this process by using macrophages to suppress the killer T cells and keep them away from tumors.

This effect of this subversion was apparent in tumor biopsies the team examined from 677 people with breast cancer. An immune profile based on the relative abundance of three immune cells in the tumors – the killer T cell, the macrophage, and another immune cell known as a helper T cell – accurately predicted overall survival from the disease, determined whether an individual’s cancer was prone to metastasize, and predicted whether it would recur once treated. The tumors that tended to fare worse under the treatment had fewer killer T cells in them.

This basic observation is what led to the new treatment strategy, which the team tried first in mice. They used a drug to reprogram mouse tumors, changing their immune profiles and looking to see whether that made them more susceptible to chemotherapy. It did. When they next gave the mice chemotherapy, their tumors grew slower and the mice lived longer without metastasis.

But will this work in people? The history of drug design is filled with examples of potential therapies that seemed to work marvelously in the laboratory only to fail in the clinic. That’s why, said Coussens, the next step will be a rationally designed clinical trial.

“The ability of basic scientists to interact with clinicians and take something from the lab bench to the bedside speaks well of the science that comes out of UCSF,” she said.