A team of researchers at the University of California, San Francisco (UCSF) has developed a simple screening tool – a question – to identify people with HIV who have neurological complications related to their infections.

Presented this week at the 63rd Annual Meeting of the American Academy of Neurology in Hawaii, the work will make it easy for any caregiver to diagnose and deal with these complications – even in the very poorest parts of sub-Saharan Africa. 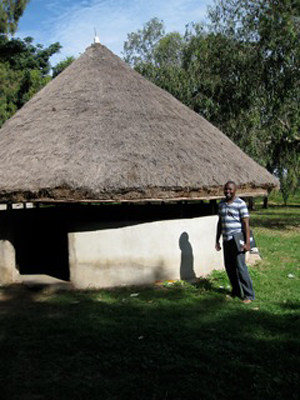 HIV infections in sub-Saharan Africa present a unique set of challenges. More than 22 million people in that part of the world have the virus that causes AIDS. While millions of them are taking life-saving antiretroviral drugs to control HIV, they also live where electricity is nonexistent, clinics are rare and trained doctors even rarer.

In some parts of rural Kenya, for instance, more than 15 percent of the population is infected, and many live in districts with fewer than one doctor for every 15,000 patients. Many people with HIV in western Kenya have never even seen a doctor, said UCSF neurologist Ana-Claire Meyer, MD, who spends the better part of her year there doing clinical research.

According to Meyer, the typical caregiver in the western Kenyan province of Nyanza, where her work is concentrated, is a nurse or clinical officer with lower-level training. While these caregivers provide life-saving first-line treatment for people with HIV, they may not have the expertise to recognize and deal with some of the complications that arise due to infections – particularly neurological problems.

One common complication in HIV is a set of conditions known as peripheral neuropathies, caused by nerve damage that can lead to mild pain and numbness in the hands and feet or a more severe and debilitating condition.

"A lot of these complications are under-diagnosed – if they are diagnosed at all," said Meyer.

Meyer's research suggests that nearly three quarters of those with HIV experience some form of peripheral neuropathy and about a fifth in that group have moderate to severe problems because of it. Worse, the peripheral neuropathies often are caused or exacerbated by the very antiretroviral medicines that are saving their lives.

"These are things that make people go off their medication," Meyer said. "Over time, I think this is going to become a bigger and bigger problem."

Meyer was joined last year in Kenya by fourth-year UCSF medical student Deanna Cettomai, who was sponsored by a one-year clinical research fellowship program for medical students to work in Africa funded by the Doris Duke Charitable Foundation.

Together Meyer and Cettomai enrolled 240 patients in the western Kenyan province of Nyanza and determined the prevalence of peripheral neuropathies among them. They found that some 71 percent experienced some form of peripheral neuropathy and about 18 percent had moderate to severe problems due to the complication.

Meyer and Cettomai tested a simple screening tool to identify these problems, and they found that just by asking whether a patient has pain in their hands and feet, they could quickly identify more than three-quarters of the people with peripheral neuropathies.

Once diagnosed, complications can often be dealt with in simple ways – by adjusting medications, starting regimens of vitamins or giving medicines for disabling pain.

In resource-limited settings, said Meyer, even the simplest of tools can go a long way to ease suffering.