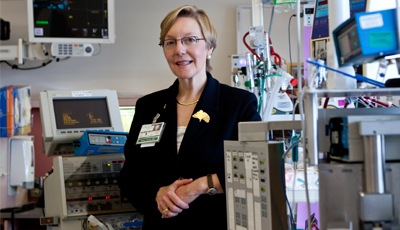 Thirty years ago, the first human fetal surgery was performed at the University of California, San Francisco (UCSF). Now, a randomized controlled trial has proven definitively that fetal surgery can help certain patients before birth.

Babies who undergo an operation to repair the birth defect spina bifida while still in the womb develop better and experience fewer neurologic complications than babies who have corrective surgery after birth, according to findings from a major multicenter trial led by UCSF researchers. The study is the first to systematically evaluate the best treatment for myelomeningocele, the most serious form of spina bifida, in which the bones of the spine do not fully form.

The eight-year trial, which was stopped early because results were so positive, shows that prenatal surgery greatly reduces the need to divert fluid away from the brain; improves mental development and motor function; and increases the likelihood that a child will one day walk unassisted. This is the first time a randomized clinical trial has clearly demonstrated that surgery before birth can improve the outcome for patients.

“For a young couple, finding out their developing child has a problem is one of the most devastating things that can happen. This landmark study offers real hope for improving the lives of children with spina bifida worldwide,” said Diana Farmer, MD, the study’s senior author and surgeon-in-chief at UCSF Benioff Children’s Hospital. “Based on our findings, it appears that fetal surgery can provide a better option for these patients than waiting to treat them after birth.”

The surgical procedures evaluated in the current trial were developed at the UCSF Fetal Treatment Center under the direction of Michael Harrison, MD, a UCSF professor emeritus considered the “Father of Fetal Surgery.” Farmer and others at UCSF performed the pioneering animal studies in the 1990’s that established a rationale for treating spina bifida – the first nonfatal condition treated at the Center – before birth. Already the world leader in diagnosing and treating birth defects in utero, UCSF became the first institution to successfully perform fetal surgery in 1981 and has trained most of the current leaders in the field.

Although the Management of Myelomeningocele Study (MOMS) initially aimed to enroll 200 expectant mothers carrying a child with myelomeningocele, it was stopped early in December 2010 with 183 participants because of the significant benefits demonstrated in the children who underwent prenatal surgery. The study appears February 9, 2011, as an Online First publication in the New England Journal of Medicine, available at https://www.nejm.org/online-first. It will be published in the March 24 print issue.

Read a Q&A with the 'Father of Fetal Surgery'

In addition to those treated at UCSF, the trial enrolled patients at the Children’s Hospital of Philadelphia and Vanderbilt University Medical Center. The George Washington University Biostatistics Center was the designated data center, and the study was sponsored by the Eunice Kennedy Shriver National Institute of Child Health and Human Development.

“This trial was an enormous effort, and the entire team provided excellent care to the patients. The families made huge contributions that will benefit many children in the future,” said co-author Jody Farrell, PNP, nurse coordinator for the UCSF Fetal Treatment Center.

Spina bifida arises during the first few weeks of development when the neural tube – the embryonic structure that ultimately becomes the central nervous system – fails to close, resulting in an underdeveloped spinal cord, according to co-author Nalin Gupta, MD, PhD, chief of pediatric neurosurgery at UCSF Benioff Children’s Hospital.

In cases of myelomeningocele, a portion of the spinal cord is left exposed and protrudes through an opening on the baby’s back that resembles a cyst. Children with myelomeningocele face lifelong disabilities including leg weakness or paralysis and a loss of bladder and bowel control. They often need braces to walk or are wheelchair-bound.

Most infants born with myelomeningocele also have a brain abnormality, known as a Chiari Type II malformation, in which the brain stem is pulled down into the upper spinal canal. The natural flow of spinal fluid also may be altered, leading to a buildup of this fluid in the brain, a life-threatening condition known as hydrocephalus.  Hydrocephalus is treated by surgically inserting a hollow tube called a shunt into the brain to drain excess fluid.

For decades, the standard approach to treating myelomeningocele has been to wait until the child is born, then cover the defect with skin. This surgery returns the tissues to a more normal position and prevents infection, but does not restore function to already damaged nerves. The prenatal surgery is similar but, by repairing the defect earlier, development may progress more normally and allow some nerve function to be restored.

“The MOMS trial has proven to us that some of the factors causing problems like hydrocephalus are in fact those that develop during the second half of pregnancy, because by closing the fetus’s back earlier in pregnancy, we can actually reverse the development of this serious condition in many patients,” Gupta said. “We have rigorously evaluated a new treatment and shown it to be effective, and now we can move forward with some very clear and convincing information about how this benefits people.”

Women enrolled in the study were randomly assigned to one of two groups. The prenatal group underwent surgery to close the spinal defect in their unborn child before their 26th week of pregnancy. The postnatal group had surgery performed on their child in the usual timeframe after birth.

Independent examiners evaluated the children in both groups when they were a year old and again at 30 months. At a year, they assessed whether a child needed a shunt and found that among those who had prenatal surgery, 39.7 percent required a shunt, compared to 82.5 percent of those in the postnatal group. Death was rare in both groups.

At 30 months, the children took standardized tests assessing their mental development and motor function. Children in the prenatal surgery group scored higher on both measures than those operated on after birth. The examiners also evaluated the children’s ability to walk and found that 41.9 percent of those in the prenatal group could walk without orthotics or crutches compared to 20.9 percent of those in the postnatal group.

“I think the outcomes of this trial are game-changing for the field of fetal surgery. However, it is important to remember that fetal surgery is just one of the options available for families and may not be applicable to everyone,” Farmer said. “The UCSF Fetal Treatment Center is all about giving families as many options as possible when there are problems. Our goal is to someday be able to treat all diseases before birth.”

Farmer noted that there are risks associated with fetal surgery. Infants who underwent the prenatal procedure were more likely to be born preterm, with an average gestational age of 34.1 weeks, compared to an average 37.3 weeks in the postnatal group. Mothers undergoing fetal surgery also face serious risks, and all must deliver subsequent pregnancies by Cesarean section to prevent uterine rupture.

“It is because of the maternal risks associated with fetal surgery that I wrote the initial grant for this study proposing that prenatal surgery for spina bifida be performed only in the context of a proper trial,” Farmer said. “This is serious surgery, and a woman risks her life just as if she donated a piece of her liver in a living transplant operation.”

According to the authors, continued follow-up of the children in the study is needed to assess whether the early benefits are sustained through school age.

Photo by Laura Morton/Special to The Chronicle