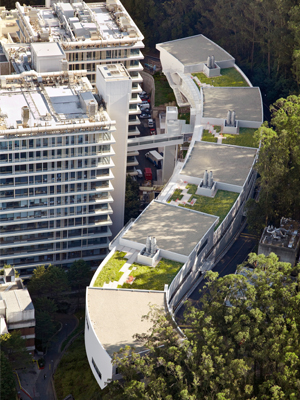 The University of California, San Francisco (UCSF) today celebrates the official opening of the Ray and Dagmar Dolby Regeneration Medicine Building, a testament to the power of perseverance in the stem cell field.

The architecturally significant structure, located on the university’s Parnassus campus, is the headquarters for the Eli and Edythe Broad Center of Regeneration Medicine and Stem Cell Research at UCSF. The program, which extends across all UCSF campuses, is one of the largest and most comprehensive of its kind in the United States.

“Today signifies a major milestone in the history of UCSF’s stem cell research program,” said UCSF Chancellor Susan Desmond-Hellmann, MD, MPH. “It is a great day for the citizens of California, whose support of Proposition 71 in 2004 helped make this moment possible, for the field of stem cell research, and, most importantly, for the human race, which we hope will someday benefit from the research underway here.”

The $123 million building, paid for with state and private funds, is an outgrowth of California’s effort to advance stem cell research in the face of more than a decade of restrictive federal funding policies. The idea for the building was conceived of in 2004 by leaders of the California Institute for Regenerative Medicine (CIRM), the state agency established to administer the $3 billion, tax-payer supported fund for stem cell research.

The CIRM leadership envisioned the creation of stem cell buildings at universities throughout California. Because no federal funds were used to construct the facility or purchase equipment within it, the research is immune to variations in federal funding policy regarding human embryonic stem cell research.

“We are pleased to have been able to help UCSF create the extraordinary building that is now home to 25 of the top stem cell laboratories in the United States,” said Eli Broad, founder of The Eli and Edythe Broad Foundation. The Broad Foundation is the largest non-governmental donor to stem cell research in California, having given $75 million to support or create stem cell centers at UCSF, USC and UCLA.

“The work that scientists are carrying out in this building is significantly advancing efforts to move discoveries in the lab toward clinical trials for a host of diseases. We are pleased to play a small role in making that possible.”

San Francisco Mayor Edwin M. Lee noted the impact of UCSF’s program on the city. "UCSF has been a trailblazer in stem cell research for more than a decade," said Lee."

This new facility not only attracts the world's best and brightest scientific minds to our City, but will serve as a center for collaboration and partnerships with biotechnology companies in Mission Bay and the region."

San Francisco resident Ray Dolby reflected on the value of UCSF to the local region. “This university is an extraordinary gift to the Bay Area, and I’m confident that the discoveries being made in this new building and throughout the UCSF campus will help many patients with intractable diseases in the coming years.”

The building, constructed on a 60 degree slope, is designed to foster intensive collaboration and a cross-pollination of ideas among scientists representing a broad spectrum of labs and disciplines. The researchers’ goal is to develop strategies for treating a variety of diseases and conditions, such as birth defects, diabetes, heart disease, Parkinson’s disease, stroke, spinal cord injury and cancer.

Designed by renowned architect Raphael Viñoly, in collaboration with the design/build team of DPR Construction, SmithGroup Architects and Forell/Elsesser Engineers, the structure is a series of four split-level floors with terraced grass roofs. Open labs flow into each other, with office and lounge areas located on the routes between labs, promoting interaction throughout the building.

The design, said Arnold Kriegstein, MD, PhD, director of the Eli and Edythe Broad Center of Regeneration Medicine and Stem Cell Research at UCSF, “is intended to allow scientists who normally wouldn’t be situated near one another to work side by side, with the goal of answering fundamental questions about the earliest steps of embryo and cell development – answers that are informing our efforts to develop treatment strategies.”

The opening of the building is a fitting metaphor for the advances that UCSF, and the field at large, have made in recent years, noted Kriegstein. In 1981, UCSF scientist Gail Martin, PhD, co-discovered embryonic stem cells in mice -- and named them. Beginning in the late 1990s, UCSF was one of two U.S. universities, along with the University of Wisconsin, that pioneered the human embryonic stem cell field.

Because scientists were prohibited by President George W. Bush’s stem cell policy from conducting these studies in federally funded buildings, UCSF scientists were forced to carry out their research in challenging circumstances -- first in segregated space within an existing UCSF lab, later in rented space at an off-campus site and subsequently 40 miles away at Geron Corp., through a joint project.

“Today, walking onto the campus, and looking up to see this spectacular facility, teeming with brilliant scientists carrying out work that could have a dramatic impact on treatment strategies for intractable diseases,” said Kriegstein, “is extremely gratifying.”

The Eli and Edythe Broad Center of Regeneration Medicine and Stem Cell Research at UCSF is one of the largest and most comprehensive programs of its kind in the United States. It encompasses 125 labs made up of scientists exploring the earliest stages of animal and human development. The goal of these studies is to understand how disorders and diseases develop and how they could be treated with the knowledge of, and use of, stem cells and other early-stage cells. For more information, visit the stem cell website: stemcell.ucsf.edu.

About The Eli and Edythe Broad Foundation

In an unprecedented partnership with the Massachusetts Institute of Technology, Harvard University and the Whitehead Institute, the Broads in 2003 announced a $100 million founding gift to create The Eli and Edythe Broad Institute for biomedical research. The institute’s aim is to realize the promise of the human genome to revolutionize clinical medicine and to make knowledge freely available to scientists around the world. They gave a second $100 million gift to The Broad Institute in 2005, and in 2008, they gave an additional $400 million to endow and make permanent the world’s leading genomics institute.

The Broads have supported the advancement of stem cell research, particularly in California, through the creation in 2006 of the Eli and Edythe Broad CIRM Center for Regenerative Medicine and Stem Cell Research at the Keck School of Medicine at the University of Southern California. In 2007, the Broads announced a major gift to the University of California, Los Angeles for the Eli and Edythe Broad Center of Regenerative Medicine and Stem Cell Research. The Broad Foundation’s Internet address is www.broadfoundation.org.