Paul Larson, an associate clinical professor of neurological surgery, has been involved in the development and evolution of novel surgical methods for deep brain stimulator implantation, including the use of high-field, real-time intraoperative magnetic resonance imaging (MRI).

A groundbreaking surgical technique developed at UCSF Medical Center is revolutionizing how deep brain stimulation is administered to treat patients with diseases such as Parkinson’s.

Deep brain stimulation has been used for more than a decade at UCSF to improve mobility and reduce involuntary movements in patients with Parkinson’s disease, a neurological disorder that affects cells in the brain that control movement.

During the surgical procedure, a battery-operated brain stimulator electrode is implanted into deep movement-controlling structures, and overrides abnormal electrical patterns in those structures, in a way that’s similar to how a heart pacemaker controls abnormal heart rhythms.

In the past, patients had to be awake during deep brain surgery in order to give real-time motor and cognitive responses so that clinicians could confirm that the device was placed in the right location.

Today, patients at UCSF’s renowned Parkinson’s Disease Clinic and Research Center can undergo the brain surgery under general anesthesia using the ClearPoint system, a neurological navigation system that was approved by the US Food and Drug Administration in June 2010.

The skull-mounted device, used in conjunction with a dedicated software package and with real-time magnetic resonance imaging (MRI), is a faster, more accurate and less invasive surgical technique for treating patients with movement disorders.

UCSF Medical Center successfully completed the first surgery with the ClearPoint system in August, and UCSF is the only hospital using the new, cutting-edge technique for deep brain stimulation.

So far, five Parkinson’s patients have undergone deep brain stimulation using the second-generation ClearPoint system at UCSF. Linda Sharp, 71, who was diagnosed with Parkinson’s disease 10 years ago, became the fifth patient to be treated with use of the new technology on Jan. 6. 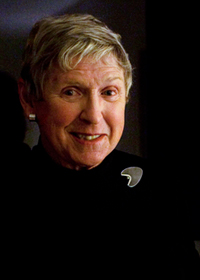 Sharp is being treated at the UCSF Parkinson’s Disease Clinic and Research Center – a National Parkinson's Foundation Center of Excellence since 1992 – by Chad Christine, MD, who suggested deep brain stimulation three years ago for Sharp, as her symptoms no longer could be controlled by medications.

“I’ve tried every medication that has come out,” said Sharp, who juggles taking five medications every three hours, which includes waking up in the middle of the night. Without her medication, Sharp requires a wheelchair. “It’s difficult to handle, the medications don’t work as well as they used to, and the disease is progressing,” she said.

“I said, ‘Oh my heavens, this does sound interesting,’” said Sharp upon hearing of the new procedure. “Not only are you completely [under anesthesia], but it is also more precise and faster. And that made it even more appealing.”

Sharp had her first appointment on Jan. 21 to tweak the programming of the electrodes, so the long-term benefits won’t be realized for some time, physicians say. But she does say the impact on her dyskinesia – or involuntary movements – was almost immediate. “Usually my whole body twitches, like dancing,” Sharp said. “The other day, I went out in the street and said it’s the first time I haven’t danced down the street from movements I couldn’t control. I was walking almost like a normal person.”

Over the long term, Sharp hopes the treatment will enable her to lessen the amount of medications she’s dependent upon and will improve her quality of life. “I hope to be able to walk more easily; I would like to go on short hikes and to have more stamina,” she said. “It doesn’t have to do wonders, but it would be great to have a more normal life.”

During the procedure – which is performed in a standard MRI suite, thus eliminating the need for an operating room – the MRI scanner produces high-resolution images of the patient’s brain in real time, allowing the surgeon to locate the best place to target the device.

Because of the real-time images, not only can the physician see and select the best target, but the software can determine the best trajectory path from the surface of the skull by visualizing critical structures, such as blood vessels and ventricles. The entry point is then located via the grid, and as the device advances, the surgeon receives more real-time images, making sure any errors in anatomical targeting can be immediately corrected. 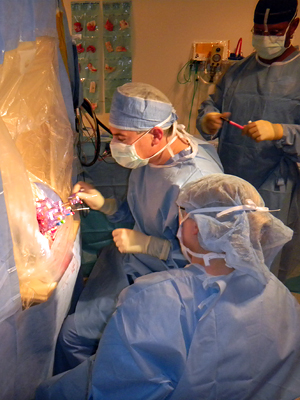 A UCSF team conducts brain surgery using the ClearPoint system, which was developed at UCSF and approved by the Food and Drug Administration in June 2010.

“The software basically takes images from the MRI machine, performs an automatic recognition of all the hardware components and provides instructions to allow very accurate aiming of the hardware,” said Starr.

The procedure itself is simple, according to Starr, and because the software is compatible with any diagnostic MR scanner, it can easily be replicated in other hospitals. Larson is working with colleagues at the Cleveland Clinic to use the high-tech system.

“The system is [adaptable] to other centers which don’t have an MR physicist or might not have the research interest or expertise,” said Starr. “They want a simple, accurate and fast solution and the new system makes that possible.”

The technology greatly adds to the accuracy of the surgical procedure. “In our initial five cases, the difference between the intended and actual target was 0.5 millimeter, which is really sub-millimetric accuracy and critical for this type of surgery,” said Starr. “No prior hardware system for inserting brain electrodes achieves this level of accuracy.”

The ClearPoint system’s precision also leads to faster execution. “Yesterday’s [deep brain stimulation] was two hours and 45 minutes, compared to about six hours for the standard approach,” said Starr, who added that some surgeons can take 12 hours for the standard procedure. “More importantly, the interventional MR approach allows the surgery to be done with a single brain penetration per side, so it’s less invasive.”

The first pediatric dystonia patient is expected to be treated with the ClearPoint system in the next couple of months, which is good news, since children have an even more challenging time than adults in being awake for brain surgery to respond to test stimulations. “For children, being awake is really not practical,” said Martin.

Because this method is so ideal for pediatric deep brain stimulation, Starr said he is switching his pediatric practice to the interventional MRI protocol.

Martin was tasked with building the software that could attain the level of accuracy needed for brain surgery. He first began working with Starr and Larson in 2003 on an image-based platform, and developed imaging protocols using an earlier skull-mounted aiming device.

“The initial aiming device that we began with in 2003 wasn’t mechanically optimized, but we learned what features we thought would be important for designing a better system from the bottom up,” said Starr.

Both Martin and Starr say their relationship with SurgiVision, which began in 2008, truly helped the product get to where it is today. 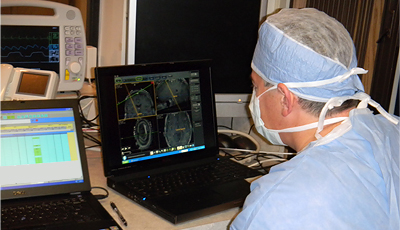 UCSF Neurosurgeon Phillip Starr looks at the MRI images of a patient diagnosed with Parkinson's disease.

“There was never a time I thought it wouldn’t be possible,” said Starr. “The difficulty is developing the software and hardware. Good surgery is driven by conceptual simplicity. This is how a lot of neurosurgery is going to be done 30 years from now.”

For Martin, the challenge lay in designing a system that could consistently achieve the level of accuracy needed to successfully complete the surgery. And during a surgery where millimeters matter, this meant controlling several factors that could easily throw that success off course.

Martin developed the MR sequencing, and much of the algorithm used in the software, based on a deep understanding of MR and special distortions of MR imaging.

Many mechanical problems also had to be solved. For example, the motion of the surgical table had to be completely deactivated. “The table moving just a little bit would throw off our ability to get the electrodes where they needed to be,” said Martin. “So we needed to understand all the different factors that were going to [affect] our accuracy and control for them. And once we’d done all that, then we could get the type of accuracy that Doctors Starr and Larson need, which is less than a millimeter from the stated target – ideally closer to half a millimeter – at a depth in the brain of about eight to nine centimeters.”

And for Sharp, those efforts are wholly appreciated. “For those of us who can have this ClearPoint surgery, it’s a wonderful thing,” she said. “I can’t say enough about UCSF and Dr. Starr’s team – from the nurses to the programmer, the neurosurgeon and the entire staff gathered around. I just want other people to have the opportunity to get this surgery and have some normal life back.”