The 96 percent survival rate found in an eight-year clinical trial at the University of California, San Francisco, stands to change the approach toward fighting intermediate-risk –  stage three and stage four – neuroblastoma. Neuroblastoma attacks the network of cells that control the body’s response to stress, known as the sympathetic nervous system, and affects 650 children in the United States each year.

Findings from the phase III trial conducted by the national research collaborative Children’s Oncology Group (COG) are being reported today in the September 30, 2010, issue of the New England Journal of Medicine, and are available online at http://www.nejm.org/toc/nejm/medical-journal.

“Our goal was to reduce the level of chemotherapy needed to effectively treat intermediate-risk neuroblastoma patients while maintaining an excellent rate of survival, and that is exactly what we did,” said senior author Katherine Matthay, MD, chief of pediatric oncology at UCSF Benioff Children’s Hospital. “This trial will lead to permanent treatment reductions in our protocol for treating this disease and will have a significant impact on the hundreds of children who are diagnosed with neuroblastoma each year.”

The study involved 479 patients, the largest trial focused on reducing the amount of chemotherapy needed to treat intermediate-risk neuroblastoma. The researchers aimed to reduce exposure to chemotherapy by at least 40 percent while maintaining the same 90 percent survival rate achieved in earlier trials using higher doses. Reducing the amount of chemotherapy is particularly important for young children whose developing bodies are extremely sensitive to the toxic cancer drugs, known to cause a host of side effects and increase the risk for later diseases unrelated to the initial cancer.

“It is my hope that we will be able to continue reducing the amount of chemotherapy we give to certain groups of neuroblastoma patients, so we can improve the long-term quality of life for these children and not have to worry about them having any secondary cancers,” Matthay said. “It is gratifying to see our patients many years after they have undergone treatment, when they are on their way to have kids of their own.”

Neuroblastoma is the most common tumor found in children younger than one year old and originates in the sympathetic nerve tissues—the nerves responsible for the body’s emergency “fight or flight” response. The primary tumor usually develops in the tissues of the adrenal glands, which are located above the kidneys, but also can begin in the chest, abdomen, neck or pelvis. Although neuroblastoma tumors may be present at birth, they often are not detected until they have grown and compressed surrounding organs or have spread to other parts of the body.

Matthay and colleagues from COG institutions across the United States treated the 479 infants and children who had intermediate-risk neuroblastoma from 1997 to 2005. All of the patients were newly diagnosed with the disease and also underwent surgery to remove or biopsy their primary tumor.

The researchers examined samples from each patient’s tumor to assess the cancer cells. Specifically, they evaluated the cells’ DNA content; the number of copies of a cancer-causing gene called MYCN; the rate of cell replication; and the amount of cell differentiation, which corresponds to the maturity of the tumor. Based on these observations, patients were categorized as having either favorable or unfavorable disease biology and assigned chemotherapy regimens accordingly.

The researchers followed the patients post-treatment and found that 96 percent survived for three years. Patients with favorable disease biology had an even higher three-year survival rate: 98 percent, while those with unfavorable biology still maintained a 93 percent survival rate. According to Matthay, if a patient with intermediate-risk neuroblastoma survives for three years without relapse, the patient almost always is cured. 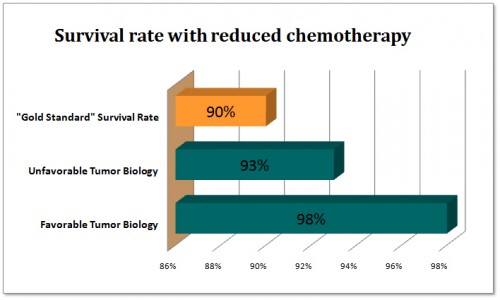 The research was supported through funding from the National Cancer Institute. A complete list of authors and affiliations is available in the paper, found on the journal’s website.

Matthay also served as one of several co-authors on a second paper that appears in the same issue of the New England Journal of Medicine and focuses on older children with high-risk neuroblastoma. Results from this clinical trial show that survival rates significantly improve when patients receive a targeted antibody therapy, a laboratory-produced molecule that attaches to specific receptors on cancer cells, in addition to the standard treatment regimen.

UCSF Benioff Children’s Hospital creates an environment where children and their families find compassionate care at the forefront of scientific discovery, with more than 150 experts in 50 medical specialties serving patients throughout Northern California and beyond. The hospital admits about 5,000 children each year, including 2,000 babies born in the hospital. For more information, visit http://www.ucsfbenioffchildrens.org/.