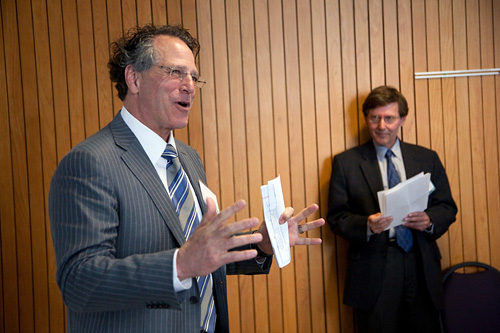 Robert Klein, who led the voter initiative to establish the California Institute for Regenerative Medicine, talks about stem cell science while Arnold Kriestein, director of the Eli and Edythe Broad Center of Regeneration Medicine and Stem Cell Research, looks on.

It’s been four decades since a research building has gone up at the UCSF Parnassus Heights campus. Now a new one is nearing completion.

The $123-million building will house about 25 different stem-cell-research laboratory groups, and will serve as the core for stem cell research that extends throughout UCSF’s campuses. The research aims to shed light on animal and human development, mechanisms of organ repair, immune rejection, biomaterials, and cancer.

“Our efforts here at UCSF will be focused on building a complete pipeline, from explorations of the mechanisms of cell biology and of stem cell biology, to clinical applications of our discoveries,” said Arnold Kriegstein, MD, PhD, director of the Eli and Edythe Broad Center of Regeneration Medicine and Stem Cell Research.

The Parnassus Heights building, designed by internationally renowned architect Raphael Viñoly, is built on a slope as steep as 45 degrees. Its vertical profile is modest in comparison to other buildings on campus. Instead, the structure curves horizontally along the hillside.

The building is a series of four split-level floors with terraced roofs, and is oriented to receive maximum sunlight. It is connected by an enclosed walking bridge to inpatient and outpatient clinics at UCSF Medical Center. Construction began in August 2008.

To better insulate the building from seismic activity, the steel-truss structure that supports the building space converges below on isolation bearings, centered atop concrete piers sunk into bedrock. 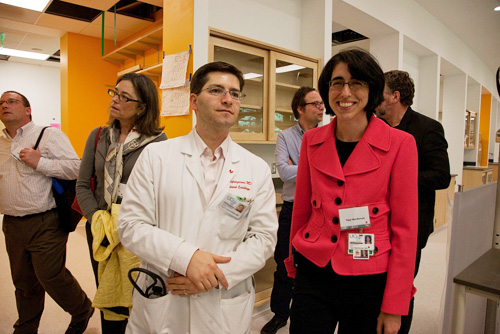 UCSF stem cell scientists Yerem Yeghiazarians and Tippi MacKenzie were among those to tour the new research building, where about 25 different stem-cell-research laboratory groups will work to discover cell-based approaches to treat disease.

“You will see that the hallmarks of this building are places for collaboration – places where scientists can interact and work together,” said UCSF Chancellor Sue Desmond-Hellmann, MD, MPH. “That’s really important in stem cell research. ...  It’s all about collaboration. It’s all about pushing the boundaries of what science can do for us.”

Steel cladding – the building’s finished exterior surface, is already up. Interior surfaces appear to be finished and primed or painted. Many floors already are tiled or carpeted. The fixtures already installed made for a well-lit tour.
Even so, instructions about avoiding objects associated with ongoing construction – “Please watch out for that cord,” for instance – peppered the tour guides’ talks.

Each of the five research wings has room for five lab groups and bench space for a total of 60 researchers. The first laboratory groups will begin moving in toward the end of the year.

Among them was Tippi MacKenzie, MD, a pediatric surgeon and fetal surgery expert. MacKenzie explained that her lab team will focus on better understanding how the immune system functions to either tolerate or reject transplants, with the aim of developing ways to better prevent the rejection of in utero stem cell transplants.

Yerem Yeghiazarians, MD, whose research program aims toward stem cell transplantation to treat heart disease, also took the tour. “We already have it all planned out,” he said. “I can’t wait to move in. I had seen it on paper, but to see it live – that’s exciting.”

The evening tour followed a wine tasting and introductory remarks by the Desmond-Hellmann, Kriegstein and Robert Klein, JD, chair of the governing board of the California Institute for Regenerative Medicine (CIRM). Klein led the 2004 state ballot initiative through which voters chose to establish the creation of CIRM, a major funder of stem cell research within the state. 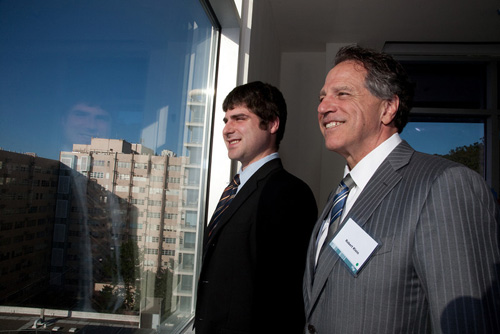 Robert Klein, chair of the governing board of the California Institute for Regenerative Medicine, toured the new stem cell research building now under construction with his son.

Speakers lauded the role of leading donors for supporting the ballot initiative as well as the construction of the new UCSF building – and for inspiring others to make donations. Ray and Dagmar Dolby launched UCSF’s fundraising effort for the building with a $16 million donation in 2005. The Eli and Edythe Broad Foundation contributed $25 million in 2008.

Klein initially was motivated to campaign for state stem cell research support because he wanted a cure for his son with diabetes, a disease in which insulin-producing cells are destroyed.

Klein spoke about sharing his concerns about the ballot initiative years ago with Stanford University researcher Paul Berg, PhD, who had already won a Nobel Prize for pioneering DNA research that helped make it possible to develop the biotechnology industry. Berg assured him that stem cell research was certain to be at least as impactful as the earlier wave of DNA discoveries. Such optimism still prevails among stem cell research scientists and supporters.

CIRM research funds are awarded competitively through a peer-review process. UCSF scientists have been leading recipients. A major award to UCSF researchers who are developing a stem cell treatment for diabetes is expected to set the stage for a clinical trial within four years, Klein noted.