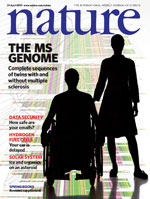 Scientists are reporting what they say is compelling evidence that some powerful non-heritable, environmental factor likely plays a key role in the development of multiple sclerosis.

Their finding, the cover article in the April 29, 2010 issue of Nature, results from the most advanced genomic analysis ever conducted on identical, or “monozygote,” twins where one sibling has multiple sclerosis and the other does not.

“Even with the very high resolution at which we sequenced the genomes of our study participants, we did not find evidence for genetic, or epigenetic differences that explained why one sibling developed the disease and the other did not,” says the lead author of the study, Sergio Baranzini, PhD, associate adjunct professor of neurology and a member of the Multiple Sclerosis Research Group at University of California, San Francisco.

The finding does not mean that genes do not play a role in the disease. In cases where one identical twin has MS, there is a 30-percent increased risk that the identical sibling also will develop the disease. In cases where a non-identical twin or other sibling has the disease, there is an increased risk of nearly 5 percent. However, says Baranzini, while limitations of current technology or small study size may have caused the team to miss important genetic divergence between twins, they consider the findings significant.

One possibility, says Baranzini, is that “while the twins inherited the same genetic risk for MS, one sibling was exposed to the perfect combination of environmental factors during her lifetime that triggered the disease, while the other was not.” This phenomenon of ‘nature versus nurture’ is believed to be a key factor in the development of complex diseases.

The study was the first to examine all three levels of a human genome at the same time, giving the first full picture of a living genome. The scientists examined the genome sequences of one MS-discordant identical twin pair and the messenger RNA transcriptome and epigenome sequences of CD4+ lympohoctyes from three MS-discordant identical twin pairs.

As a probe of a human genome, the study was a tour de force. The MS genome was explored at a depth of 20–fold coverage. By comparison, the first two single human genomes ever published – those of biologist and entrepreneur Craig Venter, PhD, followed by Nobel laureate James Watson, PhD – were sequenced at a depth of 7 to 8 fold coverage. In addition, the study investigated the first female genomes, the first genomes of twins and the first autoimmune disease individual genome sequences.

The next step in the team’s research, says Baranzini, will be to look at genetic samples of additional MS-discordant twin pairs. “Since the study began, the cost of the ‘next-generation sequencers’ we used has come down dramatically. This will allow us to broaden the study.”

As far as what environmental factor(s) could be playing a role in multiple sclerosis, the scientists did not speculate in their paper. The most prominent theory in the field is that a viral infection triggers the immune reactions that initiate the disease; Epstein-Barr virus is considered the most likely culprit. If this were the case, each person’s unique genetic make-up would influence the body’s immune reactions and determine whether they would lead to the disease. While no viral trigger for MS has been confirmed, several genetic risk factors have been identified. Other current hypotheses include vitamin D deficiency brought on by a lack of exposure to sunlight, and smoking.

Multiple sclerosis is thought to be an autoimmune disease, a condition in which cells of the immune system turn against a particular tissue of the body. In the case of MS, the attack, directed by CD4+ T-cell lymphocytes, occurs against myelin, the protective sheath that insulates nerve fibers. The attack causes hardened plaques within the brain and spinal cord that prevent electrical impulses from traveling between nerve cells, affecting neurological function.

Because there is MS discordance in 70 percent of monozygote twin MS cases, scientists have suspected that both environmental effects and genetic components contribute to MS development. Recently, however, genetic (DNA) and epigenetic (DNA methylation or imprinting) differences between monozygote twins have been described. The current study was designed to investigate whether monozygotic twins are truly identical and whether there were genetic or epigenetic differences between identical twins that were discordant for MS.

“The results,” says Baranzini, “put us a step closer to teasing out the relative contributions of genetic and environmental factors on multiple sclerosis.”

Interestingly, the researchers noticed a surprising difference between the genomes of twins that was not correlated to MS. They discovered an imbalance in which one copy of a gene is expressed at higher levels than the other copy. This phenomenon, known as allelic imbalance, causes differences in the levels of mRNA expression.

“We found many instances where an allelic imbalance was larger in one twin than in the other, or where the imbalance was flipped between the two alleles,” said Baranzini. Those differences were unexpected and are likely to be of interest in future studies of twins, whether the focus is on MS or other diseases, he said.

The study was conceived of by Stephen L. Hauser, MD, chairman of the Department of Neurology at UCSF, in collaboration with Jorge Oksenberg, PhD, UCSF professor of neurology. The genetic sequencing was conducted by scientists at the non-profit National Center for Genome Resources. The senior author of the study was Stephen F. Kingsmore, MB, ChB, BAO, a physician-scientist and president of NCGR, in Santa Fe.

The UCSF Department of Neurology has received the second largest amount of NIH research funds among departments of neurology at U.S. schools of medicine since 2007. UCSF, overall, received more research funds from the National Institutes of Health than any other public institution in 2009, and received the second largest amount of all institutions nationwide.