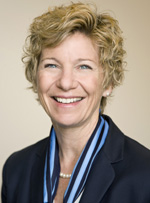 Whenever she finds herself weighing priorities, UCSF Chancellor Susan Desmond-Hellmann, MD, MPH, told a recent gathering of stem cell scientists, she reminds herself, “Patients are waiting.”

Speaking recently to scientists at the frontier of biomedical research, Desmond-Hellmann urged researchers to focus on the primary goal – making new treatments broadly available to benefit patients. Watch the video of that speech on YouTube.

Desmond-Hellmann made her pitch to kick off a San Francisco meeting of researchers who are funded by the California Institute for Regenerative Medicine (CIRM), the state stem cell agency created in November 2004 by Proposition 71. She outlined some dos and don’ts for researchers who aim to lead clinical trials to evaluate potential stem cell-based therapies.

Treating the first patient with a new therapy is an important step, but it is not the most important goal, Desmond-Hellmann said.

For Desmond-Hellmann, who trained as an oncologist at UCSF, and later served as president of product development for Genentech before becoming the UCSF Chancellor in August 2009, “The goal is regulatory approval—if it’s in the US, US [Food and Drug Administration] FDA approval—and product commercialization.”  Without commercialization, patients will not have access to needed treatments, she said.

Desmond-Hellmann stressed the need to do a better job of gathering and using information gained from clinical studies to learn more about diseases and their treatments.

Academic medical researchers may be able to provide valuable insight to help guide decisions by pharmaceutical companies about whether or not to follow-up with larger clinical trials, how to conduct the trials, which data to gather, and which patients to enroll.

Researchers need to be especially observant when working with entirely new modes of treatment, Desmond-Hellmann emphasized. Long-term side effects may not become evident during clinical trials that only last a year or two, especially if important clues are missed. Desmond-Hellmann urged researchers to analyze all their data for clues to drug effectiveness, ineffectiveness or side effects.

“Every time a patient has an experience in a clinical trail, we should learn from that,” she said. “We should learn form every patient treated with a novel therapy.”

Stem cells—unspecialized cells which can replenish themselves indefinitely and which can be induced to develop into a wide range of different cell types—are envisioned as a treatment for diseases in which tissue is abnormal or seriously damaged. These include common diseases such as heart failure, diabetes and Alzheimer’s disease.

CIRM announced plans on March 11 to provide up to $25 million for early-stage clinical trials and for stem cell research that is expected to lead to clinical trials within three years.

Stem cell therapies are untested for the most part. Clinical trials in the United States are in their infancy. Last year, Geron Corp., with headquarters in Menlo Park, California, received the first US go-ahead for a stem cell clinical trial. However, the study has been put on hold pending additional pre-clinical research, according to a company press release.

People tend to think of new drugs primarily in terms of drug efficacy, Desmond-Hellmann said. However, “Proving long -term safety has become the challenge for any new therapeutic advance.”

“Make sure there is a net benefit to treatment. … Where existing therapies are available, it’s our challenge in the world of translation to ask, ‘Am I very confident that my therapeutic advance is better than the alternative for the patients?’”

“I think we learn as much from the failures in the clinic as we learn from the successes,” Desmond-Hellmann said. She shared experiences in developing two drugs at Genentech – one a failure, and one a success.

A 1996 phase II clinical trial showed that a drug candidate for the treatment of diabetes-associated nerve damage provided significantly more pain relief than no treatment. However, subsequent phase III trials found no advantage over placebo treatment. The lesson: For diseases in which there is no known effective treatment, it is better to conduct placebo-controlled, double-blinded clinical trials earlier—during phase II studies—despite the added cost, according to Desmond-Hellmann.

The second drug Desmond-Hellmann discussed was Avastin, a monoclonal antibody. In 2004, Avastin became the first drug that targets new blood vessel growth in tumors to be approved by the FDA. Avastin now has been approved as an add-on treatment to be combined with older drugs for cancers of the colon, lung, breast, kidney and brain.

But despite the fact that it is very selective in hitting its target—a blood-vessel growth factor called VEGF—Avastin still has side-effects. Among the most serious, a small risk for stroke or heart attack, especially in elderly patients, has become clear after drug approval. This clinical experience reinforces the case for post-marketing studies, according to Desmond Hellmann.

Desmond-Hellmann lauded ways in which UCSF faculty in recent years have organized and participated in new frameworks for integrating laboratory research, clinical studies and drug development. For instance, the Clinical and Translational Science Institute sponsors a four-to-five-year training program in clinical research for medical school faculty.

The California Institute for Quantitative Biology (QB3), a collaborative effort among UCSF, UC Berkeley and UC Santa Cruz, has engaged with industry partners and venture capitalists to advance drug development in a university setting. A clinical trial is planned for a new treatment for Chagas disease developed entirely within the university, but with help from industry, Desmond-Hellmann noted.

The UCSF schools of pharmacy and medicine recently launched a new Department of Bioengineering and Therapeutic Sciences to conduct research and to train students through degree programs in drug development sciences, pharmacogenomics, therapeutic bioengineering, computational and systems biology, and cellular and molecular engineering.

In addition, the School of Pharmacy manages the American Course on Drug Development and Regulatory Sciences. Through these courses, researchers and administrators at both ends of the drug development pipeline – as well as clinical researchers somewhere in the middle – can learn about all aspects of drug development. Instructors are experienced leaders from pharmaceutical companies, leading research universities and regulatory agencies. Enrollees work through real-life scenarios in groups, with classmates from diverse professional backgrounds.