Pharmacology pioneer Leslie Z. Benet, PhD — who established the foundation for much of what is now known about the rate at which drugs are metabolized in the body — has been honored with the premier prize from the American Society for Clinical Pharmacology and Therapeutics (ASCPT).

He also was awarded his seventh honorary doctorate from the Catholic University of Leuven, Belgium in the same week.

Benet received the Oscar B. Hunter Memorial Award in Therapeutics, which recognizes lifetime achievement in drug research, contributions to patient care, and teaching, at an award presentation in Atlanta during the ASCPT annual meeting on March 20.

The ASCPT aims to advance “the exchange, development, and integration of translational science into the drug development continuum from discovery to safe and effective medication use.”

Benet presented a lecture summarizing work that has led to a better understanding of drug metabolism and disposition, dosing for individual patients, and drug toxicity. The recognition also included an honorarium and plaque-mounted medal.

The honorary doctorate from the Catholic University of Leuven, founded in 1425, was awarded on March 26 in recognition of Benet’s “innovative research and widespread influence as a driving force in many areas of the pharmaceutical world.”

Giving the proper dose of a prescribed medication is crucial to ensure safety and effectiveness. Benet was one of the creators and disseminators of the concept — called clearance — which serves as the basis for calculating how much of a prescribed drug to give to a patient. Accurate calculations of how rapidly a drug is cleared from the body are a key to an understanding how much drug is active in the body at a given time.

Benet along with colleagues Malcolm Rowland, PhD, and Gary Graham, PhD, described the first models based on the clearance concept in 1973.  They now are in standard use. Unlike earlier ways of calculating drug dose, these models can be used to account for physiological differences that arise during disease or that exist among different patients.

In modeling drug clearance, Benet and colleagues accounted for the effects of enzymes that metabolize drugs. They were the first to consider the effects of proteins known as drug transporters, which help determine whether or not and when drugs are excreted. Transporters now are a major focus of pharmacogenetic studies at UCSF and elsewhere, with research aimed at identifying important individual differences in drug metabolism.

Benet, 72, is currently a professor in the Department of Bioengineering and Therapeutic Sciences with the UCSF schools of pharmacy and medicine. He has been a member of the School of Pharmacy faculty since 1969, and he chaired the school’s Department of Biopharmaceutical Sciences from 1978 to 1998.

Man on a Chip

After stepping down as department chair more than a decade ago, Benet has intensified his research and established four private companies and partnerships to better translate his discoveries into widespread use. Most recently, Benet helped found and serves as chair of the Scientific Advisory Board of Hurel Corporation, with the aim of commercializing the “man on a chip” concept. 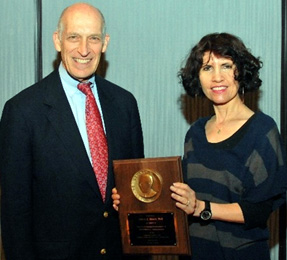 This tool promises to be an efficient and more accurate early screening technique for evaluating the efficacy and toxicity of new drug candidates, Benet says. With the use of “microfluidic” techniques, cells plated onto a plastic device are bathed in a liquid growth medium that acts like the blood supply in providing nutrients.

Compared with other lab techniques, the device allows for a more realistic evaluation of the metabolism and elimination of pharmaceuticals. It also provides a way to gain new insight into how animal and human responses to particular drugs may be similar or different, and can potentially lead to a very marked decrease in the use of animals in drug development, Benet says. In January, Hurel received the 2010 Proggy Award for Best Scientific Innovation from People for the Ethical Treatment of Animals (PETA). The award recognizes “animal-friendly achievements in commerce and culture.”

In his ongoing UCSF research Benet now is investigating the ways metabolizing enzymes and transporters can act together to speed elimination of immunosuppressive, anti-cancer, anti-HIV, and anti-parasite drugs. An additional focus is on developing measures to evaluate the ways in which drugs influence immune responses.

Benet has received many honors and awards, including the Pharmaceutical Sciences Research Achievement Award in 2004 for his significant, career-long contributions to the advancement of worldwide pharmaceutical sciences.

At UCSF, Benet received the Distinguished Teaching Award for 1972-1973 and the Outstanding Faculty Mentorship Award in 2001. The Academic Senate recognized him with the Seventh Annual Distinguished Clinical Research Lectureship for his preeminence in the field of clinical pharmacology in 2007.

Benet received AB, BS and MS degrees from the University of Michigan, Ann Arbor and his PhD degree from UCSF in 1965. He joined the UCSF faculty in 1969.

Benet was elected to membership in the Institute of Medicine of the National Academy of Sciences in 1987 and has been awarded seven honorary doctorates from distinguished universities.