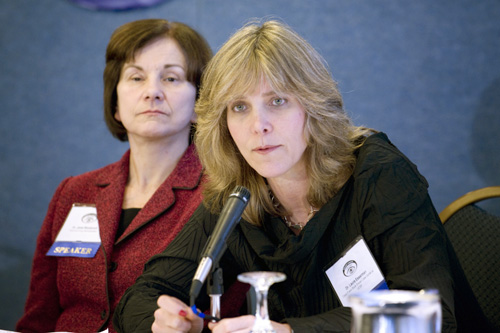 A unique national clinical trial for breast cancer — novel in its design, collaborative scope, and ability to serve as a prototype for many other diseases — gets underway this week at UCSF.

Called I-SPY 2, (an acronym for “Investigation of Serial Studies to Predict Your Therapeutic Response with Imaging and Molecular Analysis”) the trial is designed to rapidly screen promising new drugs and match the therapy to specific biomarkers.

Under the trial’s innovative path toward personalized medicine, scientists for the first time will be able to eliminate — at an early point in the trial — experimental drugs that show poor efficacy, dramatically shortening the time it takes to get the right medication to the right patient. In the process, drug development will be accelerated and the cost of testing medications reduced.

In collaboration with scientists from the National Cancer Institute, the U.S. Food and Drug Administration (FDA) and nearly 20 major cancer research centers across the country, the trial will involve about 800 women with high-risk, fast-growing breast cancers.

“I’m so excited that we are finally here,’’ said Laura Esserman, MD, MBA, principal investigator and director of the UCSF Carol Franc Buck Breast Care Center, noting the contribution of hundreds of physicians and scientists who championed the pioneering project and helped usher it to fruition.

“Over the last 20 years, I have sat across from probably thousands of women and had to tell them that they have breast cancer,” said Esserman, a UCSF breast cancer surgeon and researcher. “While it is true we have had many innovations and improvements in breast cancer treatment, the unfortunate reality is that for those women with the most aggressive cancers, they still face the stark reality that there’s a significant chance they will die from the disease. We want to change that reality. I-SPY 2 is designed to change the way that we learn.’’ 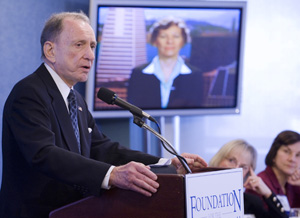 Senator Arlen Specter, a two-time survivor of Hodgkin’s lymphoma, spoke on Wednesday at a press conference in Washington DC while UCSF Chancellor Susan Desmond-Hellmann, who participated in the briefing via satellite from San Francisco listens.

“We have to ask and answer questions in cancer development more effectively,’’ said UCSF Chancellor Susan Desmond-Hellmann, MD, MPH, who participated in the briefing via satellite from San Francisco. Drawing upon her previous experience ushering the advancement of life-saving cancer medications as president of Product Development at Genentech, Desmond-Hellmann said that I-SPY 2 provides a shift in paradigm for clinical trials.

“All of us have a shared sense of urgency,’’ she said. “This is a great opportunity for us to see something that has never happened before.’’

Also participating in the press conference were Senator Arlen Specter (D-PA), a two-time survivor of Hodgkin’s lymphoma; Congresswoman Jackie Speier (D-San Mateo); Charles Sanders, MD, chairman of the Board of the FNIH and chairman of the Biomarkers Consortium Executive Committee; and Janet Woodcock, MD, director of the Center for Drug Evaluation and Research at the FDA.

Another speaker was UCSF patient Jessica Galloway, a young mother diagnosed with stage 3 breast cancer when she was 39. She participated in I-SPY 1 and, five years after diagnosis, is cancer-free.

“I-SPY 2 promises to leverage convergence of progress on a number of research fronts to speed the evaluation of promising new breast cancer drugs using molecular cancer biomarkers to identify those agents that are effective in specific subpopulations of breast cancer patients,’’ said Anna D. Barker, PhD., deputy director of the National Cancer Institute and co-chair of the Biomarkers Consortium Cancer Steering Committee. She also was a speaker at the press conference. “This will allow us to finally design advanced, smaller and less expensive Phase III trials that test the right drugs in the right patients.’’

Current drug development, said the scientists at the press conference, is far too slow and pricey — up to $1 billion and 15 to 20 years to develop a new drug for a complex disease like breast cancer.

I-SPY 2 is intended to change that with the goal of bringing safe and effective new drugs to market more efficiently, shaving several years and hundreds of millions off the current process. Under I-SPY 2’s adaptive design model, scientists will assess over the course of weeks or months, instead of years, a drug’s effectiveness and then either discard it or “graduate’’ it. 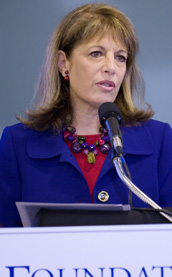 In another highly innovative aspect, I-SPY 2 will focus on treatment in the neoadjuvant therapy setting. A patient’s cancerous tumors will be left in place for six months, rather than being surgically removed immediately. During those six months, the patient will undergo chemotherapy to reduce tumor size. All patients will receive the current standard of care and most will receive one investigational drug. The trial will screen multiple drugs from multiple companies — up to a dozen different cancer drugs during the course of the trial.

Two principal investigators will conduct the trial: Esserman and Donald Berry, PhD, professor and chair of the Department of Biostatistics, head of the Division of Quantitative Sciences at the University of Texas MD Anderson Cancer Center.

I-SPY 2 is expected to cost approximately $26 million over five years. Safeway, Inc. is a significant seed funder, contributing a sizeable portion of proceeds from the Safeway Foundation’s annual October Breast Cancer Awareness fundraising initiative. Johnson & Johnson is providing a major foundational investment. The project also is being developed in part with funds from Genentech and Lilly.

The FNIH is seeking to raise remaining funds from pharmaceutical and other companies, non-profit cancer organizations and philanthropic foundations as well as individual donors.

Photos by B. Vartan Boyajian