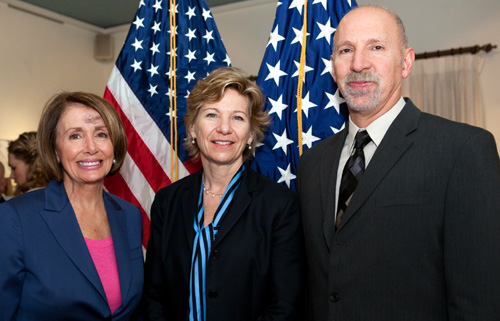 Pelosi hosted a roundtable discussion and news conference on Wednesday at UCSF to celebrate and communicate the success of the $787 billion stimulus program, one year after President Barack Obama signed the bill into law on Feb. 17, 2009.

“This is a very special day for us because we worked very hard to put together this recovery package,” Pelosi said. “Our country was on the brink of falling into a deeper national recession.”

Since the stimulus bill was passed, the number of jobs lost in the US has decreased significantly—from 741,000 jobs lost last year to 21,000 jobs lost during the same month, Pelosi said. Asked about California’s high 12.6 percent unemployment rate, Pelosi noted that the state has its own significant budget challenges, but is getting relief from the recovery act totaling nearly $90 billion that has either been distributed or allocated.

During a roundtable panel discussion, which was moderated by UCSF Chancellor Sue-Desmond-Hellmann, MD, MPH, and included Mayor Gavin Newsom, as well as others from San Francisco’s private and public sector, Pelosi asked for specific examples of how the stimulus funding is being used in San Francisco.

“The funds have enabled the University to retain scientists, enhance its research infrastructure, train the next generation of scientists, conduct leading-edge research, and uncover new knowledge to improve human health,” she said.

UCSF has been awarded 256 grants totaling $117.8 million as of Feb. 16, making the campus one of the top institutional recipients of this stimulus-based scientific funding.  As of year-end, UCSF has received $5.756 million of those funds, enabling UCSF to retain or create 568 jobs in research or associated areas.

The infusion of resources comes at a critical time for UCSF, which is one of 10 campuses of the University of California and the only campus dedicated solely to graduate and professional education in the health sciences. With shrinking state funds, UCSF has increasingly relied upon extremely competitive NIH funding to drive its research, which consistently ranks among the top in the nation in caliber across research areas.

Investing in the Future

Neil Risch, PhD, director of the UCSF Institute for Human Genetics, shared a $25 million grant with Kaiser Permanente to fund the research and creation of the largest genetic health care database ever undertaken. The project will enable scientists to conduct a genome-wide analysis of DNA samples from 100,000 Kaiser member volunteers and connecting that genomic information with actual health outcomes over the past 20 to 40 years, with the goal of ultimately improving upon personalized health care.

“This is an unprecedented opportunity for a large number of scientists around the world to better understand age-related diseases and it’s an investment for the future,” Risch said.

He noted that the stimulus funding, plus a $9 million donation from Kaiser, will finance the construction of a data center that otherwise would not have been possible and will create additional jobs.

University leaders from across the US and UC system are praising the $10.4 billion provided by the recovery act to the National Institutes of Health (NIH) to help pay for scientific research and development, the purchase of new equipment and science-related construction projects. 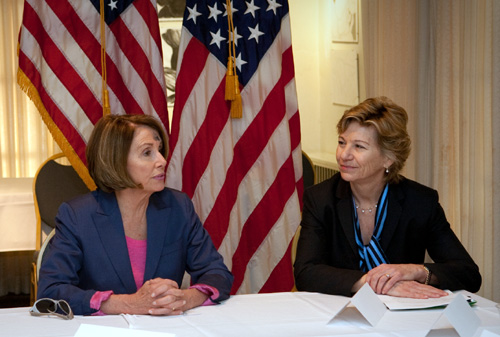 House Speaker Nancy Pelosi and UCSF Chancellor Sue Desmond-Hellmann attended a roundtable discussion about how the federal economic stimulus funds are being spent in San Francisco.

Previously, UC President Mark Yudof said that recovery act “funding is having a positive effect across the University of California system. With more than $760 million in ARRA research funding, UC researchers are working to solve some of the great scientific and technological challenges facing our country. The funds will also support our efforts to ensure a quality and affordable education and to create and retain jobs.”

Mayor Newsom said the City and County of San Francisco has received $328 million in federal stimulus funds so far and that San Francisco residents will benefit from nearly $1 billion from the recovery act that is creating more than 2,900 jobs and saving thousands more.

The event helped to humanize and highlight the local benefits of the national recovery act, which has created and saved between 900,000 and 2.3 million jobs across the country, according to the nonpartisan Congressional Budget Office.

Christopher Cary, who teaches U.S. history, U.S. government, and economics at International Studies Academy, a small public high school in the Potrero Hill neighborhood of San Francisco, is among those whose jobs have been saved.

“I chose to go into public service because of a deep conviction that serving others matters,” Cary said. “In my first two years of teaching, my position was threatened both years. Thanks to the American Recovery and Reinvestment Act and the City’s Rainy Day Fund—and the foresight of Supervisor Tom Ammiano and the leadership of Mayor Gavin Newsom—I started my third year of teaching this fall.

“I left a much more lucrative job to teach. I chose to work in one of the lower performing schools in the district and work with some of the most underserved students in San Francisco. I believe that I am making a difference. Many of my colleagues have similar stories. Without a doubt, the stimulus bill has kept me and many other young, motivated, transformative teachers in their chosen professions and looking forward to long careers.”

Small-business owner and San Francisco native William Ortiz said the $10,000 loan he received from the recovery act for his company, Gentle Parking, has allowed him to hire 13 workers. For the employees, the stimulus bill has helped their families meet basic needs like putting food on the table and paying the rent.

Kristen Bole contributed to this report.