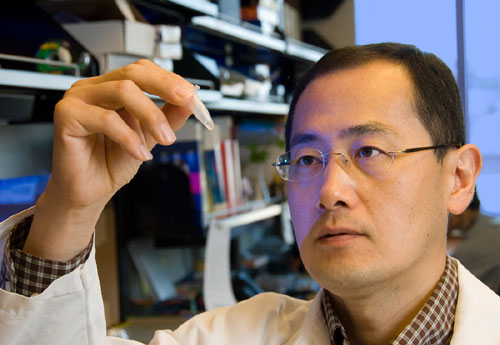 Shinya Yamanaka, MD, PhD, a UCSF professor of anatomy and senior investigator at the UCSF-affiliated Gladstone Institute of Cardiovascular Disease and Kyoto University, Japan, will be honored with the 2010 March of Dimes Prize in Developmental Biology for his pioneering stem cell work.

Yamanaka has reprogrammed human skin cells into embryonic-like stem cells, which are pluripotent, meaning that they have the ability to develop into any kind of cell. The Yamanaka method eliminates the need to obtain stem cells from human embryos and has fundamentally altered the field of developmental biology and will aid research into the prevention of birth defects.

“Dr. Yamanaka’s remarkable achievement makes it possible to have virtually an unlimited number of pluripotent stem cells that have the potential to be used to correct or repair birth defects in children,” said Michael Katz, MD, senior vice president for Research and Global Programs at the March of Dimes.

Yamanaka has won several major awards for his discoveries that have the potential to one day lead to new cell-based therapies for a variety of human diseases. He won the prestigious Albert Lasker Basic Medical Research Award in 2009.

The March of Dimes Prize is a $250,000 cash award and a silver medal in the design of the Roosevelt dime, in honor of President Franklin Delano Roosevelt, who founded the March of Dimes. The prize will be awarded to Yamanaka at a gala black-tie dinner and ceremony on May 3 in Vancouver, British Columbia, Canada, during the annual meeting of the Pediatric Academic Societies. Also on May 3, Yamanaka will deliver the Fifteenth Annual March of Dimes Prize Lectures at the Vancouver Convention Center.

The March of Dimes Prize in Developmental Biology has been awarded annually since 1996 to investigators whose research has profoundly advanced the science that underlies the understanding of birth defects. The March of Dimes Foundation created the Prize as a tribute to Jonas Salk, MD, who received foundation support for his work to create a polio vaccine.

The March of Dimes is the leading nonprofit organization for pregnancy and baby health.