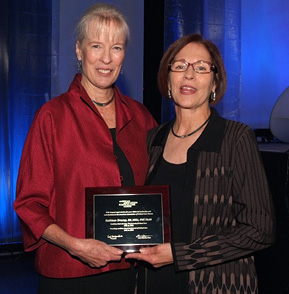 Kathleen Dracup, left, stands with AACN CEO Wanda Johanson after receiving the organization’s “Marguerite Rodgers Kinney Award for a Distinguished Career” on May 18.

Dracup is the recipient of the 2009 Marguerite Rodgers Kinney Award for a Distinguished Career, one of the highest honors conferred by the American Association of Critical-Care Nurses (AACN). The organization represents more than 500,000 acute and critical-care nurses around the world.

Dracup has received international recognition for her research into the care and needs of patients with heart disease, as well as the effects of heart disease on spouses and other family members. She has focused much of her attention on quality-of-life issues and has tested a variety of interventions designed to reduce the emotional stress of cardiac patients and their loved ones.

Dracup has had a long history of involvement with the AACN. In 1991, she served as an AACN Distinguished Research Lecturer. She was also the nurse co-editor of the AACN’s first scientific journal, “Heart & Lung,” and in the early 1990s she co-founded the organization’s “American Journal of Critical Care,” which she continued to co-edit until late last year.

The Marguerite Rodgers Kinney Award is one of four “Visionary Leadership Awards”—the AACN’s most prestigious honors. It recognizes “extraordinary and distinguished professional contributions” that further the organization’s mission of creating a health care system driven by the needs of patients and their families, according to the AACN website.

Dracup was presented with the award on May 18 at the 2009 National Teaching Institute and Critical Care Exposition in New Orleans.

After graduating from St. Xavier’s University in Chicago, Dracup received a master’s degree in nursing from UCLA and a doctorate in nursing science from UCSF. She was a Fulbright Senior Scholar to Australia and is a member of the prestigious Institute of Medicine.

Dracup is also a fellow of the American Academy of Nursing and the American Heart Association (AHA) Council of Cardiovascular Nursing. In 2003, she was the first nurse and the first woman to receive the AHA’s Eugene Braunwald Award for Academic Mentorship.