When Zahid and Sobia Bashir discovered their fetus had the same genetic disease that took the lives of two of their young children, they didn’t hesitate to sign up for a promising but experimental new therapy.

“I found out (the therapy) was a possibility and I was kind of in shock; I couldn’t believe it,” said Zahid Basir. “I only really started believing it when meetings were being set up to move it forward.”

The disease, infantile-onset Pompe, is one of several rare lysosomal storage disorders that can severely damage major organs before birth. Babies born with Pompe typically have enlarged hearts and die within two years if untreated.

Pompe disease is seen in less than 1 in 100,000 live births, and is caused by mutations in a gene that makes acid alpha-glucosidase, an enzyme that breaks down glycogen. Without it or with limited amounts, glycogen accumulates dangerously in the body. After delivery, treatment to replace the enzyme is available, but the disease still often results in very low muscle tone, ventilator dependency and death.

Fetal surgery has it roots in UCSF. In 1981, Michael Harrison, MD (left), performed the first successful open surgery on a fetus to correct a life-threatening birth defect.

Tippi MacKenzie, MD, a pediatric surgeon at UCSF Benioff Children’s Hospitals, suspected the enzyme replacement therapy might be more effective if given in utero when it could cross the blood-brain barrier. She tried treating mice with one of these disorders – successfully – then gained fast-track approval from the Food and Drug Administration (FDA) for a clinical trial in 10 humans. Not long after, she was contacted by the doctor of an eligible first patient.

Unfortunately, it was late 2020, the height of the COVID-19 pandemic. The patient was in Canada and unable to travel back and forth to UCSF for treatments.

“We shared our treatment protocol with the doctors in Canada, and they got local approval to proceed with the treatment,” MacKenzie said. “Together with Pompe experts at Duke University, we all met  by video every week to discuss care for the mother and fetus throughout the pregnancy.”

“Ayla is our little toddler, toddling around,” said Zahid Bashir of his now 16-month-old daughter. “We didn’t know if she’d be able to walk, to talk, to eat, to laugh. As she hits each of these milestones, we continue to be amazed at her progress. We are quite aware that she’s a miracle.”

Ayla received six prenatal enzyme replacement treatments at The Ottawa Hospital and was born at term. She is now receiving postnatal enzyme therapy at CHEO, a pediatric hospital and research center in Ottawa, and is doing well at 16 months old: her cardiac and motor function are normal and she is meeting developmental milestones.

“The specific thing with infantile-onset Pompe is that heart disease typically starts in utero,” said MacKenzie. “So, with this patient, we were able to see the improvement in the lack of development of heart disease in the treated fetus, compared to a sibling who was also diagnosed before birth and who developed severe thickening of the heart muscle,” she said.

New Hope for Mothers Everywhere: Mya Queen, the first patient in Dr. Tippi MacKenzie’s clinical trial for in utero treatment of lysosomal storage diseases, receives an ultrasound as part of the prenatal therapy for her fetus with Hunter Syndrome. Queen gave birth in late October, and she and her baby are doing well. Watch and share on Youtube

Infantile-onset Pompe is just one of eight lysosomal storage diseases that UCSF has received FDA approval to treat with enzyme replacement therapy in utero for its Phase 1 clinical trial. The other diseases are Mucopolysaccharidosis types 1, 2, 4a, 6 and 7, Gaucher disease types 2 and 3, and Wolman disease.

“These are such devastating diseases,” said Paul Harmatz, MD, a pediatric gastroenterologist who cares for patients with lysosomal storage diseases at UCSF Benioff Children’s Hospital Oakland. “Just being alive with normal mobility and development in a patient with severe infantile-onset Pompe disease is better than we usually see, so the results of this prenatal therapy are quite remarkable.”

Though Ayla was not treated as part of the clinical trial, researchers hope her success and the publication of her case study in the New England Journal of Medicine will increase awareness of the trial among parents at known risk of passing on these diseases and the physicians who treat them.

This is an important step toward more curative therapies that could be given prenatally – like gene therapy and gene editing. 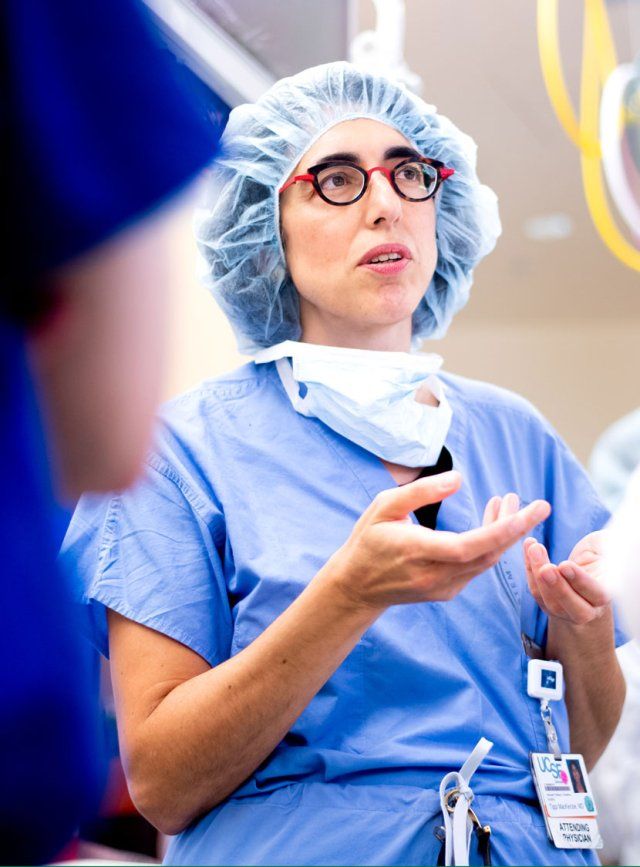 So far, two patients with lysosomal diseases have been enrolled in the UCSF clinical trial and undergone prenatal therapy. One, who has Mucopolysaccharidosis type 2, or Hunter syndrome, was born in late October after a series of treatments at UCSF Benioff Children’s Hospital San Francisco. Mother and baby are doing well.

“At first, I was nervous; I don’t like doctors or hospitals. But Dr. MacKenzie is great,” said Mya Queen, the baby’s mother. “The people at UCSF – it’s like a family.”

Patients with lysosomal storage diseases must receive intravenous enzyme infusions every few weeks for their entire lives. The hope is that this could change, however, as research progresses, said MacKenzie, who holds a Benioff UCSF Professorship in Children’s Health and a John G. Bowes Distinguished Professorship in Stem Cell and Tissue Biology, and was recently elected to the National Academy of Medicine.

“The innovation here is that we are starting the treatment before birth because we know that the organ damage starts before birth,” she said. “This is an important step toward more curative therapies that could be given prenatally – like gene therapy and gene editing.”

How the treatment works

This work also continues to expand the number and type of rare genetic diseases that can be treated prenatally, MacKenzie added.

“As new treatments become available for children with genetic conditions, we are developing protocols to apply before birth,” said MacKenzie. “I think of this as another step in expanding the repertoire of fetal therapy to treat genetic diseases that, while individually rare, are a large percentage of congenital anomalies.”

It’s no accident that MacKenzie’s project and trial bloomed at UCSF, where Michael Harrison, MD, performed the first successful open surgery on a child in the womb to correct a life-threatening birth defect in 1981, thus pioneering the field of fetal surgery.

“Mike Harrison was a personal inspiration to me when I was a medical student and continues to be a giant walking among us,” said MacKenzie. “It’s thrilling to continue what he started with this research, which is an important step in the evolution of fetal therapy, expanding from surgery for anatomic conditions to medical therapies for genetic conditions.”