When the judges finished their deliberations at UC San Francisco’s 5th Annual Postdoc Slam competition on September 21, 2022, UCSF postdoc Elise Marsan, PhD, took first place for her cell-scale crime story, “Who Killed the Neurons?” In her caper, Marsan cast herself in the role of postdoc-detective investigating the mystery of why some neurons die in the brain, a question with implications for the understanding and treatment of frontotemporal dementia.

Marsan explained that she uses single-cell RNA sequencing to study the brains of individuals who died from dementia. “By following the trail of the killer,” she discovered to her surprise that not only the “usual suspects” – brain cells called microglia – kill neurons, but also astrocytes, brain cells that are normally neurons’ “best friends”, but sometimes become “traitors,” creating toxicity that leads to neurodegeneration.

Marsan was one of 10 postdocs presenting bite-size research stories to a limited live audience gathered in Genentech Hall’s Byers Auditorium, and to several hundred more viewers on a YouTube live stream.

Organized by the Office for Postdoctoral Scholars, part of the UCSF Graduate Division, as part of National Postdoc Appreciation Week, this year’s Slam represented a return to UCSF after a two-year hiatus due to the pandemic. The popular communications competition challenges postdocs to distill their research into compelling three-minute talks that are accessible to a broad audience. Easier said than done for young scientists engaged in complex, specialized research often understood by relatively few people. 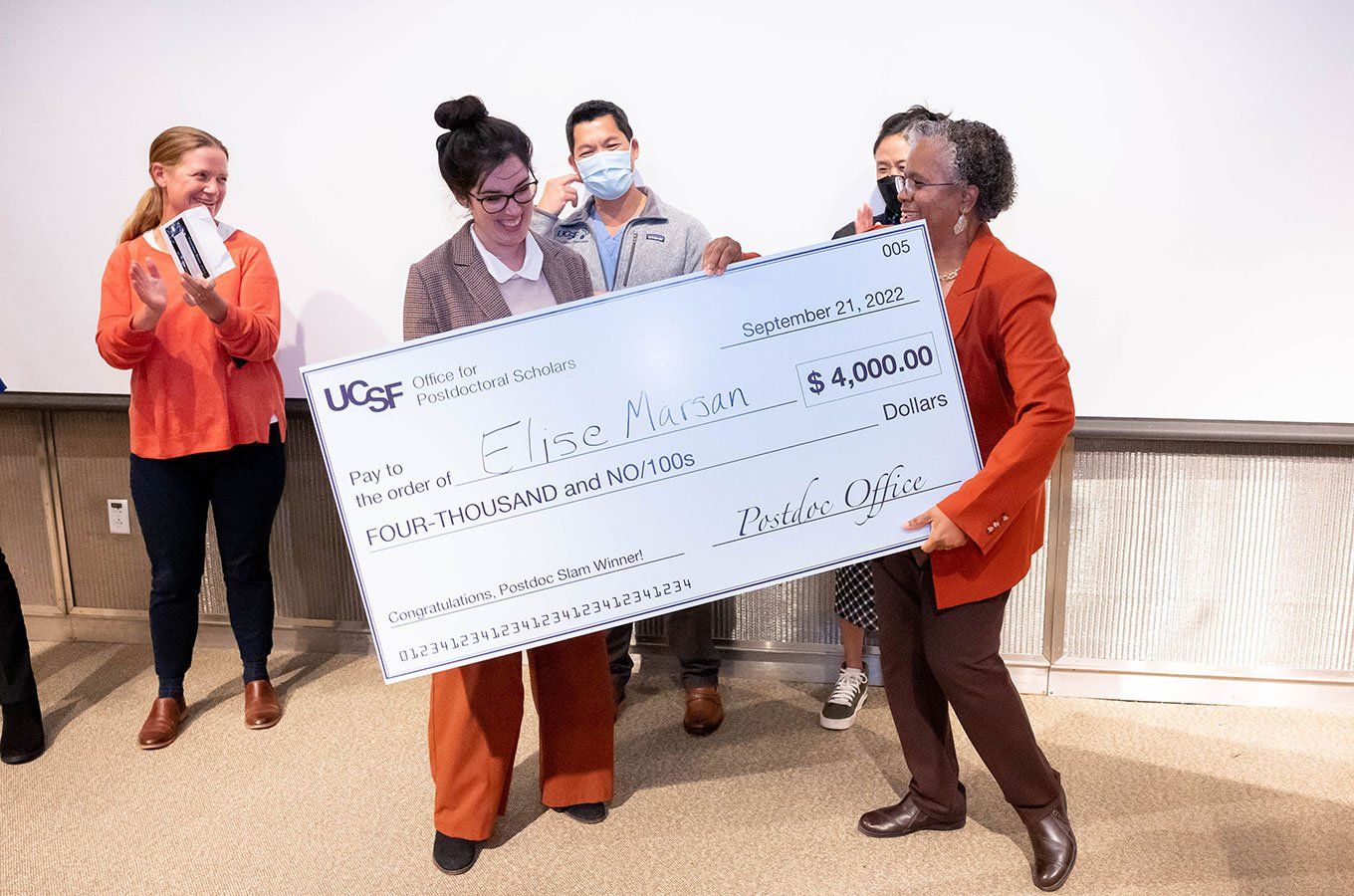 Nicquet Blake, PhD, far right, vice provost of Student Academic Affairs and dean of the Graduate Division, awards the First Prize check for the winner of the 2022 Postdoc Slam to Elise Marsan, PhD, for her 3-minute research presentation titled “Who Killed the Neurons?” Image by Susan Merrell 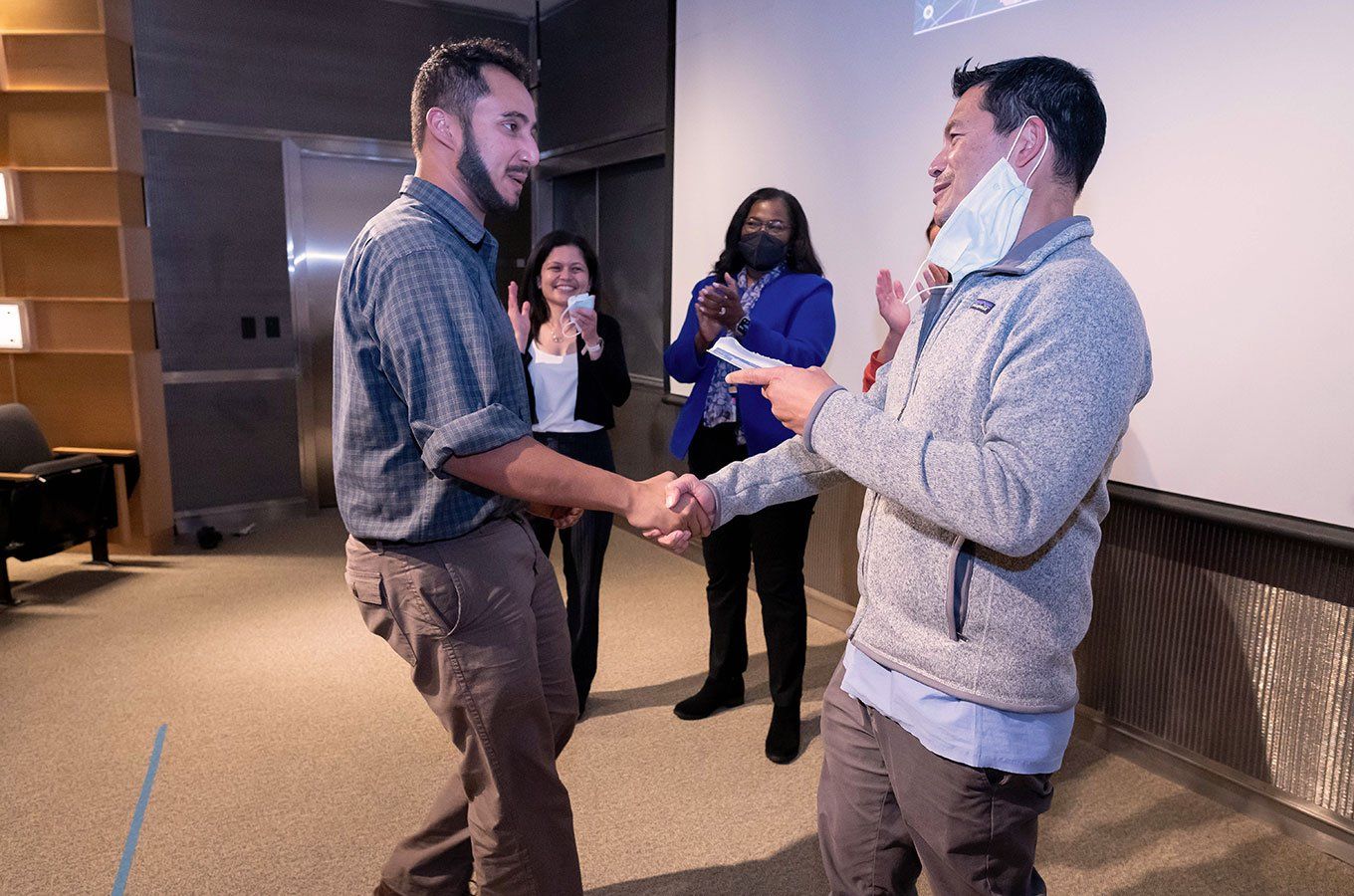 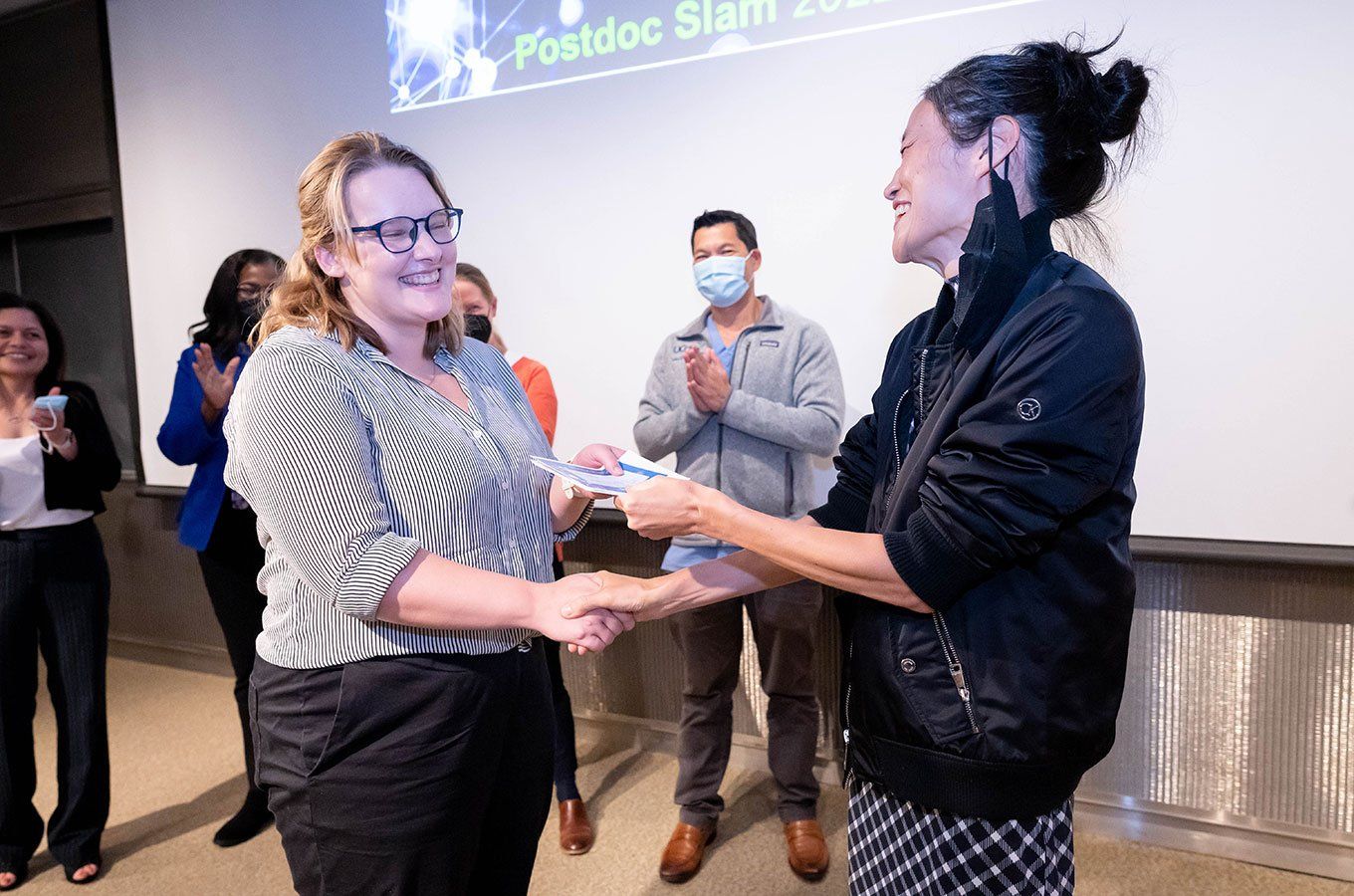 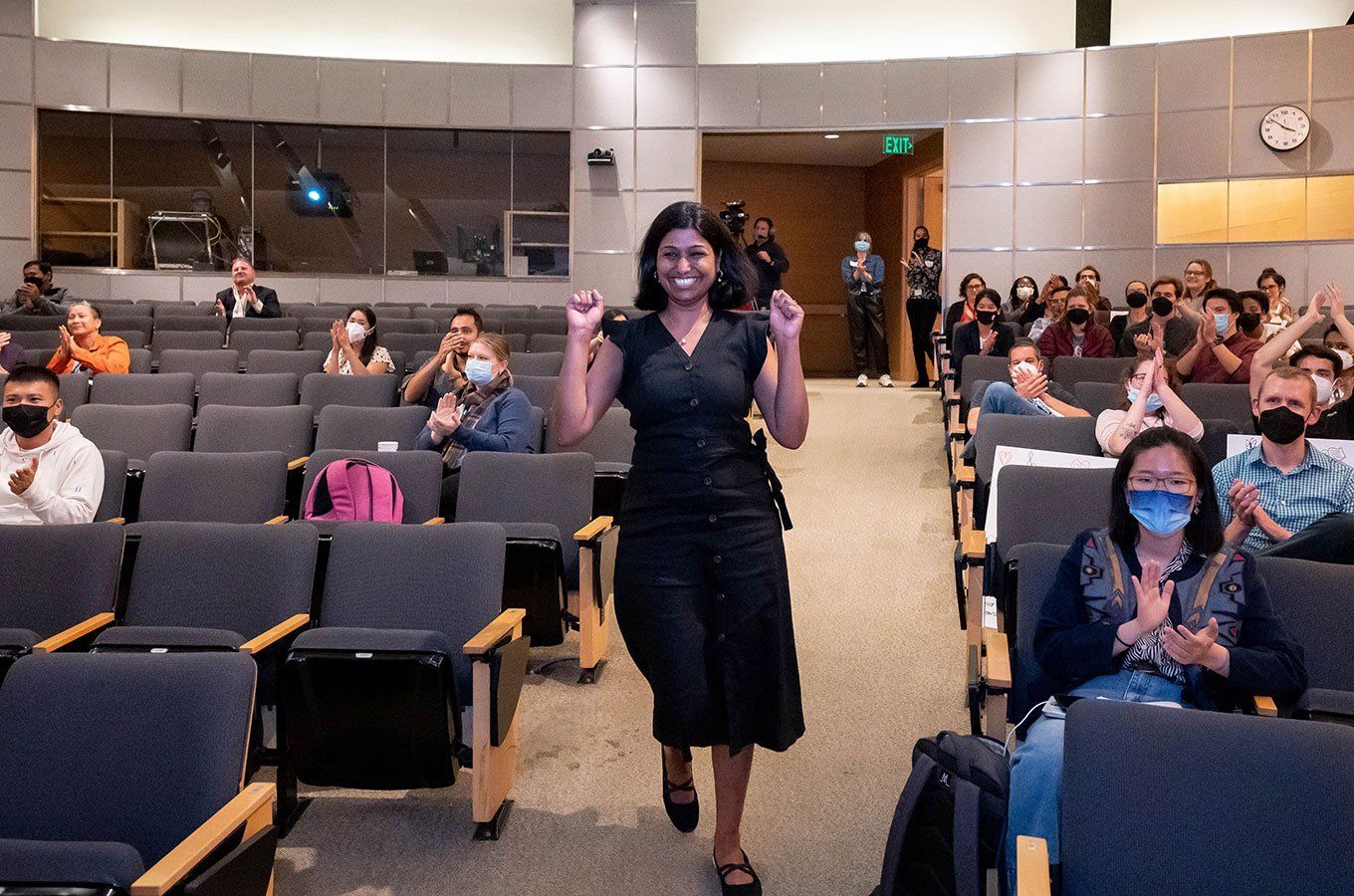 Sangeetha Kandoi, PhD, whose faculty mentor is Deepak A. Lamba, PhD, makes her way to the stage to receive the People’s Choice Award for her 3-minute research presentation titled “Can’t You See Well? This Squirrel Could Help You!” 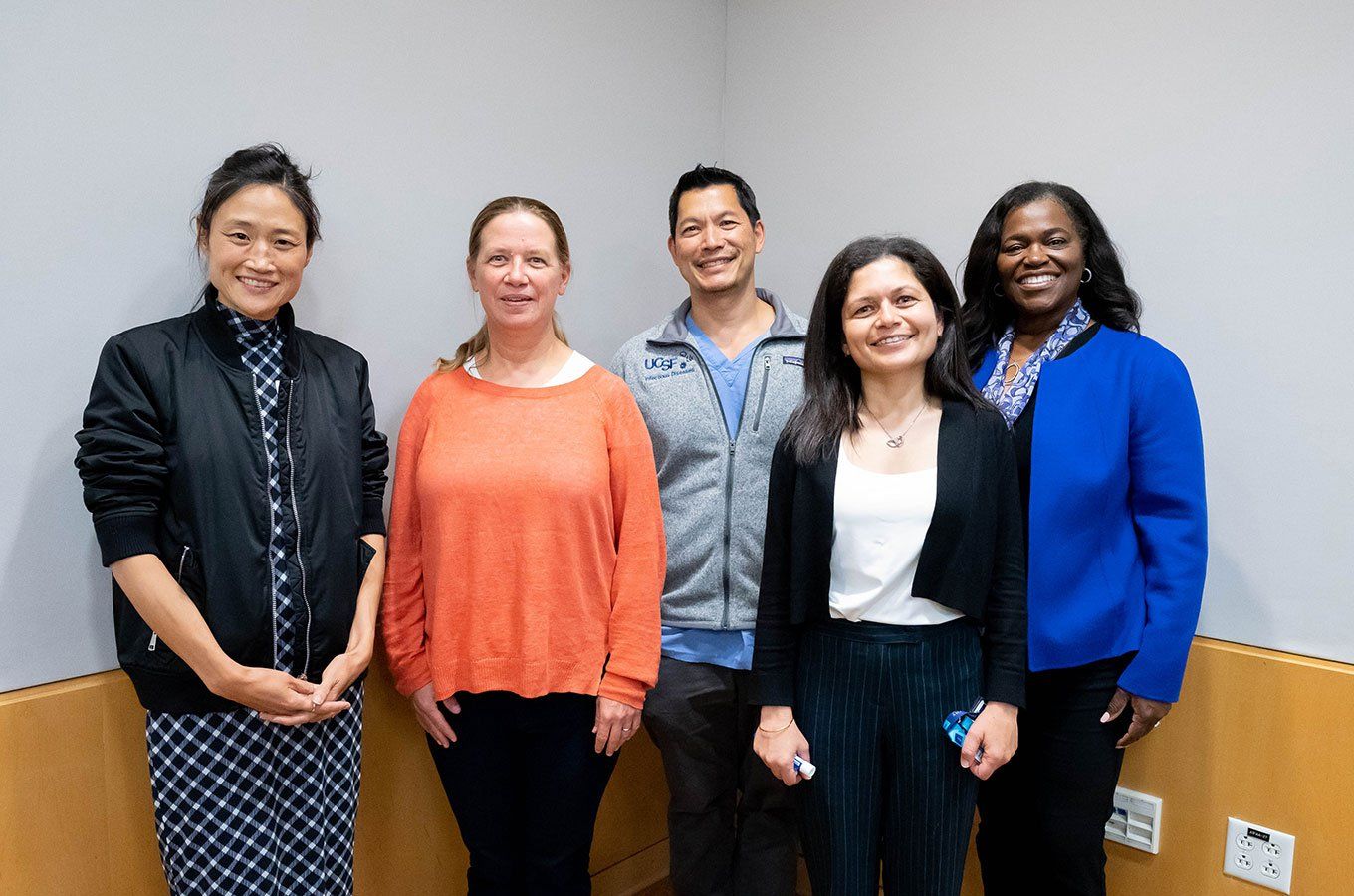 Nicquet Blake, PhD, dean of the Graduate Division and vice provost of Student Academic Affairs, hosted the lively event, with a panel of five judges on hand to select the recipients of first-, second-, and third-place prizes. The in-person and remote audiences voted on the People’s Choice prize winner. Awards were cash prizes, ranging from $750-$4000.

The ability of scientists to communicate their research effectively to the public is just as critical as the science being performed.

Chowdhury, who as a postdoc took top prize in the 2018 Postdoc Slam, acknowledged her unique perspective: “I have great appreciation for every contestant, since I know the amount of hard work and dedication that goes into capturing a complicated research topic in three minutes. Having been on both sides of the aisle, it was extremely special judging Postdoc Slam.”

Nielsen has been a fan of Postdoc Slam from its beginning and was honored to be called to the judge’s seat. “Postdoc Slam is a great opportunity for anyone – layperson or scientist – to connect with the diverse research happening at UCSF. I love the excitement and passion of each of the speakers.”

Second place went to Deepto Mozumdar, PhD, whose talk, “Slaying Deadly Bacteria with Giant Viruses,” described how he and his collaborators are trying to harness the power of a “jumbo bacteriophage” called phiKZ, one of a class of giant viruses that can help fight deadly bacteria.

The live and remote audience vote yielded a People’s Choice award for Sangeetha Kandoi, PhD, whose talk “Can’t You See Well? This Squirrel Could Help You!” addressed the whys and hows of using ground squirrels as a model organism for her research on cell transplantation therapy to replace retinal cone cells lost due to aging or other conditions.

For Marsan, who has likely polished her communication skills as a co-founder and member of the Improv at UCSF group, “communicating the latest advances of my research is, to me, a duty and a true pleasure. I am honored I could present my work and practice my scicomm skills through this joyful event!”

Her fellow prizewinners agree on the value of this exercise. “As scientists, we need to be able to convey the significance of our work beyond the walls of our institutions in a way that cuts through the jargon and hits home with the key message,” said Mozumdar.

Huddart described the challenge of distilling her work and its relevance down to three minutes as “grantsmanship on steroids.”

The postdocs who participated in Postdoc Slam were supported through a special communications workshop, 1:1 coaching and feedback sessions, and individual practice sessions in the auditorium before the main event.

Event host Blake noted that the Slam is a great way for postdocs to flex their communications muscles and share their impressive research. “The ability of scientists to communicate their research effectively to the public is just as critical as the science being performed,” she said, “Watching these talks was a beautiful reminder that the future of research is in great hands – and great voices.”