Using new technologies to study thousands of genes simultaneously within immune cells, researchers at Gladstone Institutes, UC San Francisco (UCSF), and Stanford School of Medicine have created the most detailed map yet of how complex networks of genes function together. The new insights into how these genes relate to each other shed light on both the basic drivers of immune cell function and on immune diseases.

“These results help us flesh out a systematic network map that can serve as an instruction manual for how human immune cells function and how we can engineer them for our benefit,” says Alex Marson, MD, PhD, director of the Gladstone-UCSF Institute of Genomic Immunology and co-senior author of the new study, published in Nature Genetics.

The study, conducted in collaboration with Jonathan Pritchard, PhD, professor of genetics and of biology at Stanford School of Medicine, is also critical to better understand how variations in a person’s genes are connected to their risk of autoimmune disease.

Scientists represent these connections among proteins and genes as networks that look somewhat like a subway map. Mapping these networks is important because they can help explain why mutations in two different immune genes might lead to the same disease, or how a drug might have an impact on many immune proteins at once.

In the past, scientists have mapped out a part of these networks by removing the gene for each protein, one at a time, and studying the impact on other genes and proteins, as well as on immune cells’ overall function. But this kind of “downstream” approach only reveals half the picture.

We really wanted to look at what is controlling key immune genes.

“We really wanted to look at what is controlling key immune genes,” says Jacob Freimer, PhD, a postdoctoral fellow in both the Marson and Pritchard labs, and first author of the new paper. “This kind of upstream approach hadn’t been done before in primary human cells.”

This upstream approach would be like mapping out the subway routes by first identifying main hubs and then figuring out the routes to those key stations, rather than by painstakingly reconstructing the whole network from disparate satellite stations.

Freimer and his collaborators turned to the CRISPR-Cas9 gene editing system, which allowed them to disrupt thousands of genes at once. They concentrated on genes that make a type of proteins known as transcription factors. Transcription factors are the switches that turn other genes on or off and can control many genes at once. The scientists then studied the impact of disrupting these transcription factors on three immune genes known to play an important role in T cell function: IL2RA, IL-2, and CTLA4. These three genes were hubs that anchored the upstream mapping efforts.

“This let us go through over a thousand transcription factors and see which ones have an impact on these immune genes,” says Freimer.

The researchers suspected that they would find connections between the genes regulating IL2RA, IL-2, and CTLA, but they were surprised by the extent of the connectivity they discovered. Among 117 regulators found to control levels of at least one of the three genes, 39 controlled two of the three, and 10 regulators simultaneously altered levels of all three genes.

To help fill out the immune gene map even more, the team next took a more traditional downstream approach, removing 24 of the pinpointed regulators from T cells to show the full list of genes they regulate—other than IL2RA, IL-2, and CTLA4.

When we understand the ways in which these networks and pathways are connected, it starts to help us understand key collections of genes that need to function properly to prevent diseases. 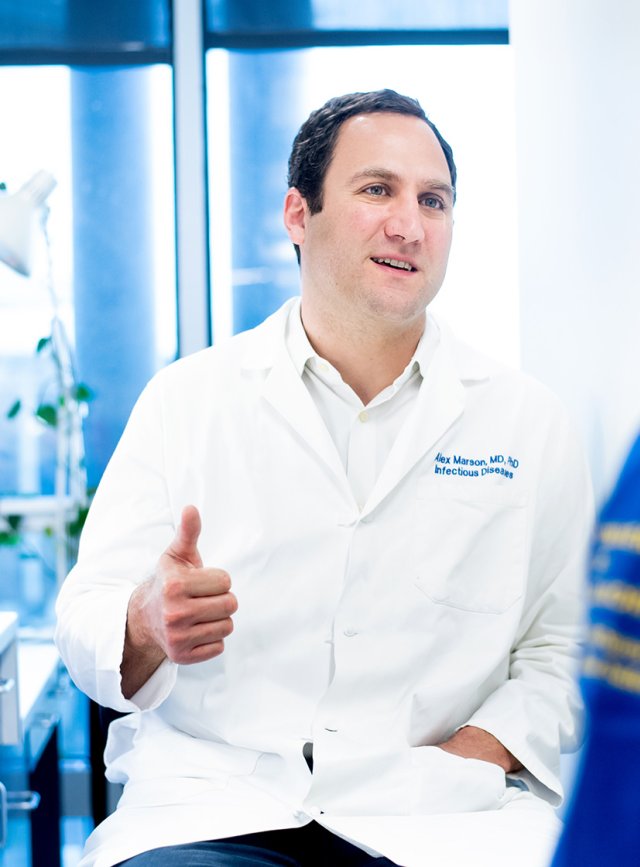 As in a dense subway network, each hub was connected to many others, and the connections ran both ways.

“There were cases where a transcription factor was regulating IL2RA, but then IIL2RA itself also controlled that same transcription factor,” says Freimer. “It appears that these kinds of feedback loops and regulatory networks are much more interconnected than we previously realized.”

Among the full list of genes controlled by the regulators studied, the research team found a high number of genes already linked to immune diseases, including multiple sclerosis, lupus, and rheumatoid arthritis.

The new map helped reveal how genetic changes associated with these diseases can appear in different genes but—because of regulatory connections between genes—end up having the same net effect on cells. It also points to key groups of genes that might be targeted by drugs to treat immune diseases. The study suggests there’s a central network of important genes, and when this network is perturbed, it can increase a person’s disease risk.

“When we understand the ways in which these networks and pathways are connected, it starts to help us understand key collections of genes that need to function properly to prevent diseases of the immune system,” says Marson.

About the Research Project: The paper “Systematic discovery and perturbation of regulatory genes in human T cells reveals the architecture of immune networks” was published in the journal Nature Genetics on July 11, 2022. Other authors are Christian Garrido of Gladstone; Oren Shaked and Jessica Cortez of UCSF; and Sahin Naqvi, Nasa Sinnott-Armstrong, Arwa Kathiria, Amy Chen, and William Greenleaf of Stanford School of Medicine. The work and the authors were supported by National Institutes of Health (R01HG008140, RM1-HG007735, T32AI125222, and 5F32GM135996-500 02); the Burroughs Wellcome Fund; the Chan Zuckerberg Biohub; the Innovative Genomics Institute; the American Endowment Foundation; the Cancer Research Institute; the Jordan Family; Barbara Bakar; the Parker Institute for Cancer Immunotherapy; a Helen Hay Whitney Fellowship; a Stanford Graduate Fellowship; and a Stanford Center for Computational, Evolutionary, and Human Genomics Fellowship.

About Gladstone Institute: To ensure our work does the greatest good, Gladstone Institutes focuses on conditions with profound medical, economic, and social impact—unsolved diseases. Gladstone is an independent, nonprofit life science research organization that uses visionary science and technology to overcome disease. It has an academic affiliation with the University of California, San Francisco.