Lara Stuart and her husband, David Lodge, first noticed the peculiar rash on their son Quincy’s face when he was just shy of 4 months old.

Trips to the pediatrician and a dermatologist didn’t offer up any concrete answers – and within weeks, Quincy’s abdomen started to swell.

Stuart and Lodge drove Quincy to the nearby UCSF Benioff Children’s Hospital Oakland emergency department, and the infant was admitted to the hospital, where doctors ordered a battery of tests.

Later that day, the family received the news that would change their lives forever: Quincy had a rare and aggressive childhood blood cancer called juvenile myelomonocytic leukemia, or JMML.

Through the next few months, Quincy’s treatment would take him and his family across the Bay to San Francisco and to the frontier of using precision medicine to unearth a drug that would save the infant’s life.

Too Ill for Standard Treatment

JMML tends to strike children younger than four years old, and it accounts for 1 percent to 2 percent of all childhood leukemia cases, or about one in a million children each year. The disease develops in the bone marrow and leads to an elevated white blood cell count that interferes with the marrow’s ability to produce healthy red blood cells and platelets.

Currently, the only potential cure for JMML is a stem cell transplant – and only about half of patients who receive a transplant achieve long-term remission – but Quincy was too ill to withstand one.

“Having a sick child is beyond surreal. It is the scariest journey you could ever go through in your life,” Stuart reflected. “After Quincy got the diagnosis, it was like we were suddenly in a twilight zone, taken out of our normal lives, dropped in a foreign place and stuck in a room night and day. It changes you.”

Soon after receiving his diagnosis, Quincy was transferred to UCSF Benioff Children’s Hospital San Francisco, where clinician-researchers, including Mignon Loh, MD, and Elliot Stieglitz, MD, have been at the forefront of JMML research and treatment for years.

Doctors administered the chemotherapy that is typically given to JMML patients in powerful doses to slow the cancer, but it did nothing. The infant’s spleen began to protrude from his abdomen, making it difficult to eat and breathe, and soon Quincy was sent to the operating room for an emergency removal of his spleen.

“As a parent your job is to keep your child alive,” Stuart said. “There were days when we thought he wouldn’t make it, so we were prepared for the worst and just hoping beyond hope for the best.”

A Novel Test and Glimmer of Hope

Determined to leave no stone unturned, Quincy’s doctors ordered an RNA sequence profile and a relatively new genetic test called the UCSF500 – one of the most comprehensive cancer gene panel tests available, with a database of nearly 500 known cancer genes. The test compared the DNA of Quincy’s cancer with that of his healthy cells, identifying potentially cancer-causing mutations. Importantly, some cancers, especially those caused by a specific mutation, already have effective targeted medications available. Even when targeted therapies are not yet available, knowing the specific genes involved can clarify the exact type of cancer a patient has.

At UCSF, the UCSF500 test is now routinely given to cancer patients who aren’t responding to standard treatment, have relapsed, or have less than a 50 percent chance of survival.

According to Alejandro Sweet-Cordero, MD, a pediatric oncologist who oversees the molecular oncology initiative that interprets all UCSF500 results, the test is unique in its ability to assess genetic alterations in both adult and pediatric cancers.

“Unlike most commercially available tests, the UCSF500 can identify inherited predispositions to cancer, which is very important to help patients design prevention and surveillance strategies,” Sweet-Cordero said. “By sharing the data for all cases analyzed with the UCSF500, we can find patterns that will help us better treat our patients in the future.”

In Quincy’s case, the RNA sequencing and UCSF500 both revealed that he had an unusual genetic alteration in which a gene called FLT3 becomes fused to another gene, CCDC88C, that normally lives on a different chromosome.

Although this type of genetic alteration had never been seen before in a JMML patient, FLT3 mutations are common in some adult cancers, which gave Quincy’s doctors an idea.

While Quincy recovered from his splenectomy surgery, Stieglitz approached his parents about trying an oral medication called sorafenib, an FLT3 inhibitor that has been effective in treating many adult liver and kidney cancer patients whose cancers are driven by changes in FLT3.

The drug had never been tested in clinical trials for infants, so even the proper dosage was unknown. In fact, an earlier study even recommended against sorafenib for JMML because it had found no FLT3 alterations in a group of patients with the disease.

It was a risky but promising approach to his treatment, and we needed to pray, cross our fingers, and believe in the best. They asked us to trust them, and we did.

It was, as everyone understood it, a last-ditch effort.

“I was scared but felt comfortable knowing this was the shot we needed to take, and really felt like everyone was doing their due diligence,” Stuart said. “It was a risky but promising approach to his treatment, and we needed to pray, cross our fingers, and believe in the best. They asked us to trust them, and we did.”

A mere three days after Quincy started taking sorafenib, his white blood cell count plummeted from an abnormally high 70,000 to a normal level of 10,000. Two weeks later, the normal levels held steady, and Quincy finally was able to move back home after more than four months in the hospital.

About two months after beginning the medication, Quincy was healthy enough to undergo a bone marrow stem cell transplant, but he presented a challenging case for the UCSF Pediatric Blood and Marrow Transplant team in many ways. Because Quincy is biracial, there were no matches for him in the National Marrow Donor Program’s 20-million person registry. Nor did he have any siblings who could be potential donors. A “half-matched” transplant from his father was the only option, but Quincy’s illness had required many platelet transfusions, which caused his immune system to develop antibodies against a wide range of proteins, meaning he would likely reject his father’s stem cells. The transplant team, led by Christopher Dvorak, MD, devised a novel combination of medications and procedures to eradicate these antibodies.

As an additional precaution, stem cells from Quincy’s father were filtered through an experimental procedure, called T-cell receptor alpha-beta depletion, to remove most of the cells that could potentially cause an attack on the recipient’s body. This state-of-the-art procedure by the UCSF Pediatric Cellular Therapy Laboratory has made stem cell transplant a possibility for all patients, regardless of racial background.

With these combined efforts, Quincy’s stem cell transplant was a success and he bounced back beautifully. In July 2017, Quincy celebrated his first birthday at home with his family.

After a relatively new genetic test called the UCSF500 helped doctors find a drug to treat his JMML, Quincy (center) was able to undergo a bone marrow transplant with his father, David Lodge (right), as the donor. Photo by Barbara Ries 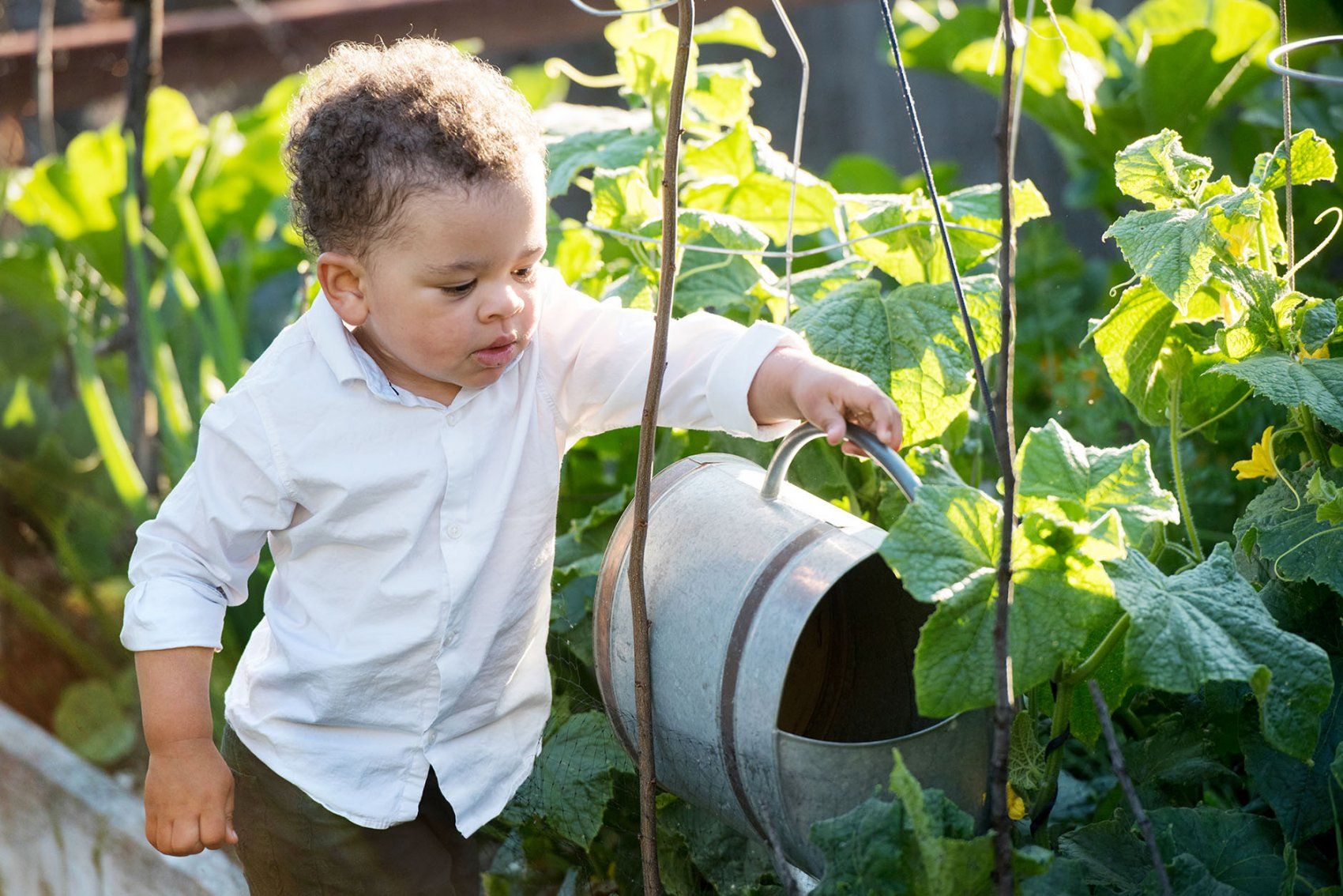 Quincy’s family has slowly reintegrated into a more normal day-to-day life after his treatment for JMML at UCSF Benioff Children’s Hospitals. Photo by Barbara Ries 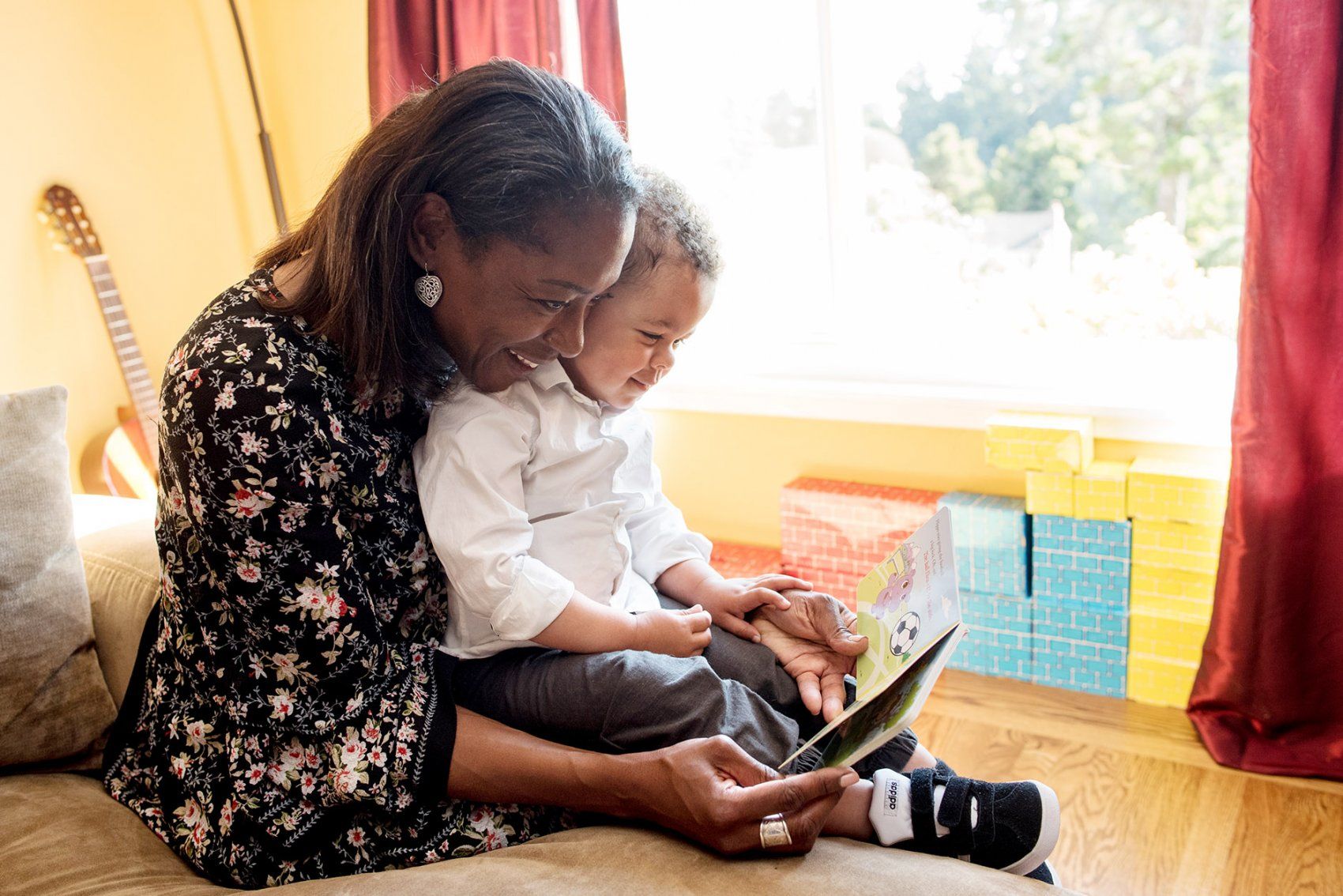 Quincy’s mother, Lara Stuart, reads to him at their family home. Photo by Barbara Ries

Quincy plays in the backyard of his family backyard. Just years before, his parents noticed a rash on his face, and weeks later he was diagnosed with a rare and aggressive childhood blood cancer. Photo by Barbara Ries 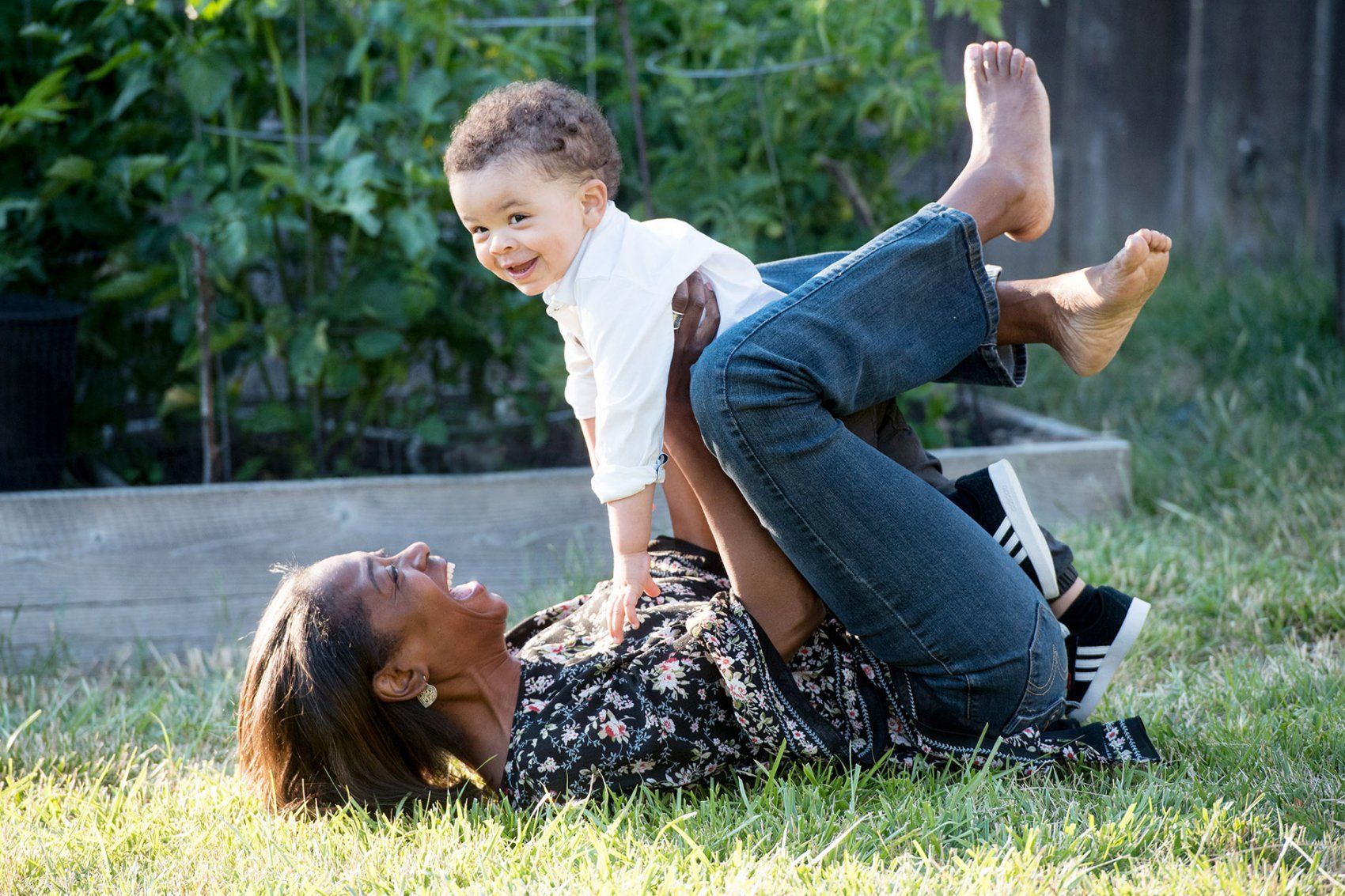 “It was a risky but promising approach to his treatment, and we needed to pray, cross our fingers, and believe in the best,” said Quincy’s mother, Lara Stuart, of his treatment for JMML. “They asked us to trust them, and we did.”

A Leap of faith

When doctors suggested a new medication – never before used in an infant – to fight Quincy's cancer, parents Lara and David took a leap of faith.

Their bravery saved Quincy's life and inspired the family to become advocates for pediatric cancer research.

“Sometimes children are trying to tell us that standard chemotherapy is not the right choice for their specific type of cancer and that they require personalized treatments,” Stieglitz said. “We read the letters of his DNA, saw what mutations were in his tumor, and gave him medication specific to that mutation that we never would have thought of otherwise. When you use precision medicine, it not only works better, it’s also safer because there are fewer side effects.”

Now more than two years after his transplant, Quincy no longer needs to take sorafenib and is in complete molecular remission. His family has slowly reintegrated into a more normal day-to-day life, happily accepting birthday party invitations and even taking the talkative toddler on his first plane ride to visit extended family.

“This whole experience was just the most beautiful symphony of collaboration and people putting together their knowledge and expertise to save a little boy,” Stuart said. “He’s a miracle, and there’s no way powerful enough to say thank you.”