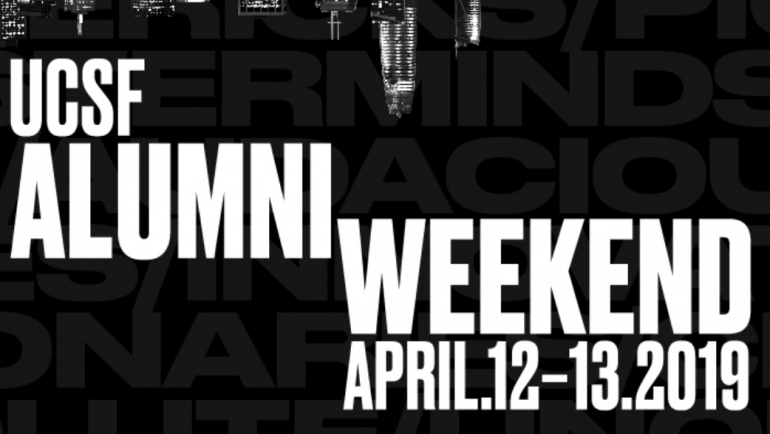 The Alumni Association of UC San Francisco has named 15 winners of the 2019 UCSF Campaign Alumni Awards, honoring the remarkable work not only of some of its most accomplished alumni, but also up-and-coming alumni leaders.

Winners of the awards will be recognized during UCSF’s Alumni Weekend, April 12-13.

“Across the board, our alumni are known for the outsize impact they have in the sciences, in public discourse, and on the health of individuals and communities alike. These awards not only honor some of our best and brightest, but also exemplify the contributions of so many others,” said Mario Peraza, executive director of Alumni Relations.

Three winners were selected in each of five categories (The Audacious, The Innovators, The Compassionate, The Dedicated, and The Pathfinders) based on their distinguished service in research and education, transforming care delivery, or improving access to advance health equity.

The 15 winners were selected from an accomplished group of 125 nominees. Nominations for the 2020 UCSF Campaign Alumni Awards will open in August 2019.

This award recognizes those who have achieved a single, remarkable accomplishment by setting a vision so impactful that others might have doubted it could be done.

Dao began her pursuit of a better breast pump after her own experiences as a new mother and busy physician made her realize that existing technology could not meet her needs.

Her company, Dao Health, produces a hands-free, battery-powered system that is discreet enough to fit under clothing, allowing women to return to work without switching to costly and less nutritious formula. A hand-powered model benefits mothers in regions of the world where electricity is less available.

Tam’s unlikely path to fame as a blogger, award-winning cookbook writer, and leading advocate of the paleo diet began on the nightshift of a hospital pharmacy, where lack of sleep and poor food choices were taking a toll on her well-being.

After transforming her diet, Tam began blogging about the incredible changes in her physical and mental health. The blog turned into a bestselling cookbook, Nom Nom Paleo, followed by another, as well as a popular cooking app and lucrative partnership with Whole Foods.

A founding director and CEO of San Francisco's On Lok, she created a groundbreaking model for elder care that became the prototype for a federal program now operating in 33 states. Her numerous prestigious federal appointments include commissioner of the Medicare Payment Advisory Commission and member of the National Veteran's Administration Advisory Committee on Gerontology and Geriatrics. As CEO of the American Geriatrics Society, she led 6,000 health professionals devoted to improving health, independence, and quality of life for older people.

Recognizing her enormous impact on care delivery for America’s veterans and the elderly, she received the American Society on Aging’s Hall of Fame Award in 2015 and PBS’s Next Avenue designation as one of the nation’s 50 Top Influencers in Aging, in addition to numerous awards and accolades.

This award honors individuals whose work has led to unexpected findings or outcomes that resulted in positive changes to the science or health care communities.

Damania, better known as ZDoggMD to his social media followers, is a passionate advocate for changing how health care is delivered in the US.

A practicing hospitalist by day, Damania began producing satirical rap videos in 2010, parodying hits by Notorious B.I.G. and Bruno Mars to speak directly to his fellow physicians and the general public about topics that frustrated him – from vaccine-deniers and overworked doctors to the dangers of unsafe sex. These witty videos have amassed close to 1.2 million views.

As the leader of Turntable Health in Las Vegas from 2013 to 2017, Damania created a subscription-based model of care that produced exceptional patient satisfaction and greatly improved health outcomes.

Irving created the first chimeric antigen receptor (the "CAR" in the recently FDA-approved CAR T-cell therapies for hematopoietic malignancies) as a PhD student in the lab of Arthur Weiss, MD, PhD. This surprising invention formed the foundation for a transformative new mode of immunotherapy.

Irving later led a program at Genentech that culminated in the production of the anti-PDL1 checkpoint inhibitor therapeutic Tecentriq – his second major impact on cancer therapy.

Irving continues to be a force in this field as the chief scientific officer at Five Prime Therapeutics, and an active alumnus and student mentor at UCSF.

Wells, professor and director of the Center for Health Services and Society at the UCLA Semel Institute, is a psychiatry pioneer who helped establish that mental health conditions such as depression are as widespread, impactful, and worthy of attention as hypertension, diabetes, and other life-threatening diseases – particularly in communities that lack access to care.

This award honors individuals whose work is marked by boundless empathy, understanding, and caring within health care or science.

Goodson, who earned his Certificate of Orthodontists from UCSF in 1984, is a community orthodontist who has exhibited a lifetime of compassion and volunteerism, starting with a dental externship at the Federal Corrections Institution for Women in Alderson, West Virginia, in 1978.

From 1997 until 2010, Goodson volunteered monthly to serve low-income and uninsured patients in his region, providing extractions, fillings, and surgical procedures. Through Medical Ministries International, he provided dental care in rural areas in Dominican Republic, Haiti, and Ethiopia, and most recently participated in dental clinics that served thousands of children and adults across his home state.

Goodson’s current service is contributing to the Caring 7 (an organization that feeds the homeless at Thanksgiving and Christmas, and tutoring students at R. Max Abbott Middle School.

Rodriguez has served the Salinas Valley in California since 1983 as a community leader and family physician with a practice that primarily serves Spanish-speaking populations from all socioeconomic backgrounds.

As a clinical instructor for the UCSF School of Medicine, Rodriguez helped UCSF medical students and other clinical trainees understand the unique challenges of serving Spanish-speaking and immigrant populations in rural California. Today, Rodriguez serves as Associate Chief of the Medical Staff at Salinas Valley Memorial HealthCare, where he spearheaded a fundraising initiative that raised more than $400,000 for much-needed medical programs.

As an Oakland-based physician and community activist, Tascoe has a global reputation for effective and courageous leadership in the most complex settings. She led medical missions to Kenya following the 1998 embassy bombings, Tanzania, the Democratic Republic of Congo, Angola, India, Sri Lanka, and Haiti following the 2010 earthquake, where she continues to advise on major health efforts.

This award recognizes those who have devoted their careers to inspiring the next generation of scientists and health care providers.

A cell biologist by training, Frazier is a curator at the Exploratorium, a public learning laboratory and museum in San Francisco. She focuses on the challenge of engaging people with science that is beyond the realm of what can be seen and touched: areas like genomics and climate change. She is currently developing a series of exhibits that help visitors explore the infinitesimal worlds of marine microbes and immune cells. She co-curated the museum’s Living Systems Gallery as well as Living Liquid, a project that visualizes large ocean datasets.

Kishi, who operates by the motto “find a need and fill it,” is an indelible part of the fabric of the UCSF School of Pharmacy, where he made his career and now serves as associate dean for student and curricular affairs.

As a young faculty member in the 1960s and 1970s, Kishi joined colleagues working to transform clinical pharmacy. They went on rounds and counseled patients on their take-home medications – discovering often invisible and unmet needs. These experiences shaped Kishi into a leader who would quietly guide the School’s students, curricula, and research for half a century.

Today, Kishi applies his compassion and problem-solving skills to support students’ progress in the PharmD program, guiding many through times of personal and academic crisis.

A retired assistant clinical professor at UCSF School of Nursing who also served on the faculties of University of San Francisco and San Francisco State University, Leavitt has a lifetime of professional experience in the psychiatric field, both as a clinician and educator.

Leavitt, who was instrumental to the partnership between Sonoma Valley Community Health Center and UCSF, won the health center’s Star Award in 2014, in recognition of her work as an advocate for community health.

This award honors those who have graduated or completed training within the last 10 years. These individuals are relentless in their pursuit of new ideas that push the boundaries of science and health care.

An assistant clinical professor in orofacial sciences, Aamodt studies the impact and effectiveness of Invisalign and other accelerated tooth-straightening treatments, and teaches UCSF dental students how to navigate this new field of orthodontia.

Eager to make clear braces more accessible and clinically sound, he established his own company, Uniform, in 2018, which merges innovations in digital technology with the expertise of UCSF-trained orthodontics to help patients improve their smiles.

Aamodt also works to understand how malocclusion is distributed worldwide and how this has changed through history. As a resident, he helped to build a network of universities in Central and South America to study how malocclusion and tooth decay may affect quality of life for indigenous groups.

In launching the program, she recognized that the field of physical therapy lacked the structured environment to allow PTs to specialize early in their career. She saw that developing a residency program would create a forum for new graduates and experienced clinicians alike to access mentors and engage with specialized coursework.

The program’s success has led to the creation last fall of a second physical therapy residency in acute care modeled after the program Green started. She is an assistant professor in the Department of Physical Therapy at CSU Sacramento.

Barceló has spent his young career balancing a dual passion for science and social justice. Prior to medical school, he worked in international development, later for the 2008 Obama campaign, and then in biotech, helping to develop a novel diagnostic test for malaria.

Entering UCSF in 2011, Barceló was one of the co-founders of UCSF’s White Coats for Black Lives, which became a national movement in 2014 with its “White Coats Die-In” protest in response to the deaths of Michael Brown and Eric Garner. Their work inspired UCSF leaders to address racism, bias, and health disparities head-on, and renewed a much-needed dialogue throughout campus.

After completing a year of independent research, Nicolas then returned to UCSF to complete his medical degree and is currently a psychiatry resident at UCLA.