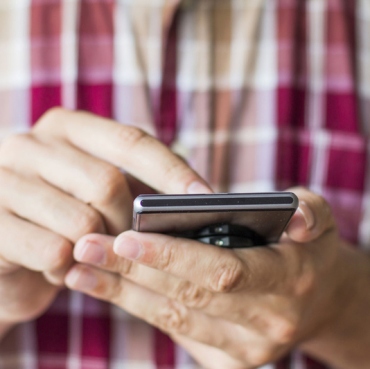 The vast majority of older homeless adults have access to mobile phones, but they are usually basic phones, without annual contracts that let them keep stable numbers, and thus are only practical for one-way communication, according to a UC San Francisco study of how homeless people use mobile and Internet technology.

Without annual phone contracts, owners lose their numbers each time they get a new phone. The researchers said this constant churn increases the stress and social isolation of an already highly vulnerable group, making it difficult for these older adults, many of whom have chronic health conditions, to stay in touch with family and friends, or to access much needed medical services.

“It just makes an already very difficult life that much harder,” said Margot Kushel, MD, professor of medicine at UCSF and senior author of the study published Wednesday, Dec. 5, in JMIR (Journal of Medical Information Research) mHealth and uHealth. “Moving in with family is among the most common exits from homelessness, so the inability to stay in touch with family members is a huge problem.”

The results came from Kushel’s ongoing NIH-funded study, called HOPE HOME, which is charting the lives of 350 homeless people—mostly single black men—aged 50 and older in Oakland, California. Kushel, director of the Center for Vulnerable Populations at Zuckerberg San Francisco General Hospital and Trauma Center, has shown that homeless people experience poor health and age-related health problems 20 to 30 years earlier than the poorest members of the general population who have housing. The median age of HOPE HOME participants is just 58 years old, but many are already experiencing health issues associated with geriatric patients.

Most of those in the study only had access to the most basic technology, and they used smartphone and Internet technologies even less than elderly adults in the general population—those 65 and older—or those with very low incomes.

“This is the group that is at the bottom of the digital divide: older, minority and poor,” Kushel said.

While three-quarters owned or had access to a mobile phone, two-thirds had so-called feature phones, rather than smartphones, that could not access the Internet. Only about six percent had annual mobile service contracts.

Just over half of those surveyed—55 percent—said they had used the Internet at some point. Nearly 40 percent had been online in the previous month, getting Internet access at a variety of public locations, such as the library. About one-third said they had a current email account.

More than 80 percent used their phones and/or the Internet to contact their families, and nearly two-thirds used these methods to communicate with medical providers. About a third used them to search for housing and employment.

The authors said a lack of two-way communication exacerbates the unnecessary use of emergency services by homeless patients, because it is so hard for them to make and keep medical appointments.

“We found that 72 percent of our study participants had a clinic and over 50 percent had a primary care provider, but people still had incredibly high use of the Emergency Department, and in part it was because of the lack of bidirectional communication,” said Maria Raven, MD, MPH, associate professor of emergency medicine at UCSF and the study’s first author. “The system is set up so that patients can’t get healthcare without coming in, unless they have phones where providers can reach them.”

The authors said some providers try to make up for the lack of communication by scheduling their homeless patients to come back frequently for problems that could have been managed over the phone, even though traveling is a hardship for these patients. Providers also sometimes hold their homeless patients over in the Emergency Department to await the results of tests.

These problems are likely to get worse as health care moves toward the use of online portals to communicate with patients, make appointments, order tests and fill prescriptions. But Kushel said it would not be that hard or that expensive to provide homeless people with mobile phones and also annual phone contracts, so they could keep their numbers for extended periods of time. The cost of providing phones with contracts would be low compared to what safety-net providers already spend on missed appointments and excess use of the Emergency Department.

“The phone is not the solution to the homeless crisis,” Kushel said. “But we should be doing everything possible to make these people’s lives easier and alleviate the unnecessary challenges they face.”