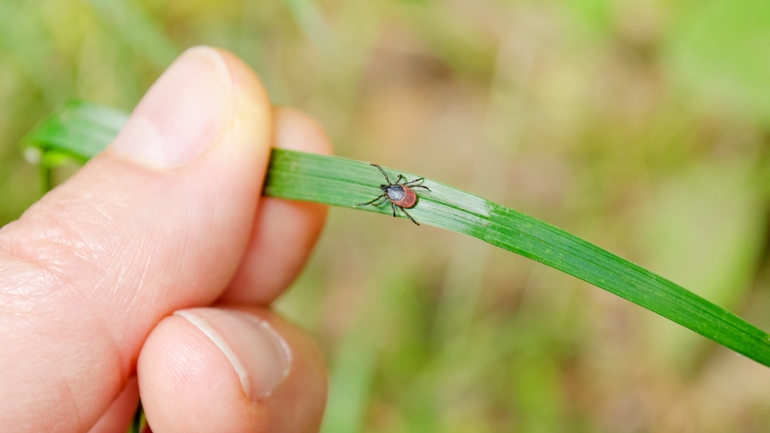 May marks the beginning of the summer season when black-legged ticks that spread Lyme disease are more prevalent – even in California.

Moreover, due to underreporting, the actual number of Lyme disease cases is estimated to be significantly higher – likely more than 350,000 in 2016.

We talked to infectious disease expert Charles Chiu, MD, PhD, about the rise in Lyme disease cases, better diagnostic tests on the horizon and what you need to know to protect yourself from infection. Chiu is an associate professor of laboratory medicine and medicine and director of the UCSF-Abbott Viral Diagnostics and Discovery Center.

How common is Lyme disease in California? And why have rates been increasing?

In terms of reported cases, there are about 80 to 100 a year in the state. Residents in or travelers to the northwestern coastal counties – Trinity, Humboldt, and Mendocino – are at highest risk. But because of underreporting, the actual number of Lyme disease cases likely exceeds 1,000 cases a year, simply because most cases of Lyme disease are not reported.

There are several potential reasons why rates have increased in California and nationwide. One is globalization. People travel extensively, and for instance, someone could get infected while on the East Coast and come back with Lyme disease.

Another reason is climate change, in that the geographic range of the tick vector, which is the Ixodes or black-legged tick, has expanded westward from the northeast United States as well as southward year after year. For ticks to be maintained in nature, they need to have what we call an animal reservoir, essentially a mammal such as a squirrel or rodent that can harbor Borrelia burgdorferi – the bacterium in the tick that causes Lyme disease. Therefore, expansion of the animal reservoir is also another reason for increasing Lyme disease rates. On the East Coast, the reservoir is the white-footed mouse. In California, the Western gray squirrel harbors the bacterium. Lizards, while not a reservoir for Borrelia burgdorferi, are common hosts for the black-legged tick in California so increase the risk of infections to humans by maintaining the tick population in the wild.

How is Lyme disease transmitted, and is it contagious between humans?

However, humans are considered a dead-end host because the efficiency of transmitting the bacterium to other humans is extremely low. The period during which you can find the bacterium in blood is very brief, generally a few days at most, and blood-borne transmission of Borrelia burgdorferi, such as by transfusion, has never been reported. Borrelia burgdorferi is also not excreted in other body fluids such as sweat, urine, saliva, or respiratory secretions. Lyme disease is therefore not considered contagious.

Compared to other infections, is Lyme disease more difficult to detect and diagnose?

It does appear that Lyme disease is harder to diagnose, and it’s because the Borrelia burgdorferi very rapidly leaves the blood and disseminates into the lymph nodes and into tissues. As a result, blood tests for early Lyme disease have low sensitivity.

Why is it important to accurately diagnose Lyme disease?

Is it true that it takes at least 24 hours for a tick to transmit Lyme disease to you?

Yes, this is true. The CDC recommends that patients who notice the tick and remove it within 24 hours do not need antibiotic prophylaxis with doxycycline to prevent Lyme disease transmission. The tick typically needs to be on you, basically sucking your blood and attached to you for 36 to 48 hours, during which the Borrelia burgdorferi migrates from the tick gut to its salivary glands, before it can transmit the Lyme pathogen.

So it’s definitely important to find the ticks early and get them off you.

Yes, I recommend that after you go hiking or camping or are otherwise potentially exposed to ticks, that you always do a tick check. The ticks that are most likely to transmit the bacterium are young nymphal ticks. They’re about the size of a poppy seed, so they’re extremely small.

Ticks do not jump or fly. What they do is called “questing,” which means that they wait at the ends of grass or foliage and when you brush by, they’ll immediately latch onto your leg or onto your clothing. But you really need to conduct a tick check all over your body because you won’t necessarily get bitten by the tick where the grass contracted your leg. Ticks can crawl to your armpit or groin and bite there, for instance.

It can be fairly high, anywhere from 2 percent to 15 percent among nymphal ticks in California, depending on the geographic location and season.

How accurate are the current diagnostic tests for Lyme disease? And why do many cases remain undiagnosed?

The current approved testing for Lyme disease is a two-tier serologic test that looks for the generation of antibodies in response to the infection.

But the key limitation of the serologic test in early Lyme disease is that typically an infected individual may take several weeks before he or she is able to mount an antibody response. Therefore, in early Lyme disease, the test sensitivity is only about 30 to 40 percent.

Now after a person generates antibodies after three to four weeks, then the two-tiered serologic test tends to be very sensitive and is good for determining whether a patient was infected.

The take-home message is that we do not have an accurate test for early Lyme disease, and this is why the diagnosis is generally made clinically by a physician and also why there is so much underreporting.

Your lab is working on better diagnostics for Lyme disease. How is your new test different?

The big area of clinical need is the ability to diagnose early Lyme disease before you can reliably detect it by antibody testing. Usually that window is zero to one month following the tick bite.

We used this data in a follow-up study – which is currently unpublished – to develop a test with more than 90 percent accuracy in diagnosing early Lyme disease in patients presenting have a fever and rash, generally seven to 10 days after the tick bite.

It’s really a completely new category of diagnostic tests made possible because of advances in sequencing over the past several years.

What is currently the best standard of care for treatment of Lyme disease?

The standard of care for early uncomplicated Lyme disease recommended by the CDC is 10 to 21 days of doxycycline, which is an oral antibiotic that you take twice a day. Patients admitted to the hospital with severe complications of disseminated Lyme disease, such as meningitis or endocarditis, typically receive a two- to four-week course of an intravenous antibiotic such as ceftriaxone.

If you get Lyme disease once, can you get it again?

Yes, you can, because protective antibody immunity can wane after several years and you may also be infected by a different strain of Borrelia burgdorferi.

There’s a Lyme disease vaccine for dogs, why isn’t there one for humans?

There actually was a vaccine called LYMErix that was approved by the FDA in 1998. But four years later, it was withdrawn from the market. At the time, there were questions involving the safety of the vaccine, concerns raised by anti-vaccine groups, cost, burdensome vaccination schedule (three doses a year), uncertainty regarding efficacy and need for boosters, and low public demand.

I think that there are now some efforts underway to bring back either this vaccine or other vaccines onto the market, especially given the rise of Lyme disease. This is a disease that infects more than 300,000 people a year, so it's certainly something for which a vaccine would be really helpful.

Why do some patients with Lyme disease show persistent symptoms, even after being treated for the disease with antibiotics?

A small percentage of patients with Lyme disease – depending on the study, 5 to 15 percent – exhibit persistent symptoms after treatment, which can include chronic fatigue, muscle and joint pain, headaches, episodes of “dizziness” or blackouts, cognitive difficulties and/or arthritis. After six months, given significant impairment in quality of life, these patients may be diagnosed with PTLDS (post-treatment Lyme disease syndrome).

We don’t know the cause of PTLDS, or why some patients develop this. Some hypotheses are that the Borrelia burgdorferi bacterium causes persistent infection somewhere in the body or that the symptoms are due to an aberrant immune response to Lyme infection, such as autoimmune disease.

What do you see as the next step in Lyme disease research?

Part of the reason why we haven’t been seeing, clinical trials, vaccines, or drugs for Lyme disease is that we don’t have an accurate diagnostic test, and we would have no way of monitoring, for instance, effectiveness of a prospective vaccine or drug therapy in a clinical trial. We really need the diagnostic test to guide our potential treatments or prevention methods for the bacterium. I think it’s really going to be the development of better diagnostics that will drive potential therapies forward.

A second critical next step is identifying why is it that a proportion of patients with Lyme disease exhibit persistent symptoms that can last for months to years. We need to identify both the cause of PTLDS and identify potential treatments.