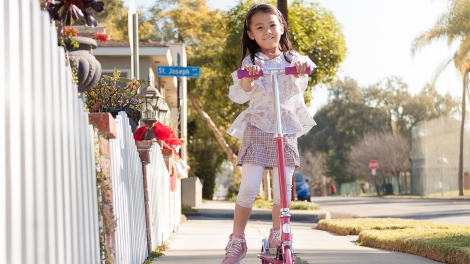 While poverty has long been linked with poor health, a study from UC San Francisco has found that simply living in a more desirable neighborhood may act as a health booster for low-income children.

UCSF researchers compared levels of the stress hormone cortisol in 338 kindergartners whose families’ annual incomes ranged from less than $10,000 to $200,000-plus. The research team found that the average cortisol level among 113 of low-income children who lived in poor neighborhoods reached the 75th percentile. But when they looked at cortisol levels in 32 low-income children living in better-quality neighborhoods, the average was in the 45th percentile, the researchers report in the May 8, 2018, issue of Psychosomatic Medicine.

“Cortisol is a measure of biological stress arousal, and elevated levels can place children at risk for both poorer physical and mental health,” said first author Danielle Roubinov, PhD, assistant professor of psychiatry, and a member of the UCSF Weill Institute for Neurosciences.

“’The quality of neighborhoods was assessed by a measure that evaluates access to green spaces, exposure to environmental toxins, and availability of early childhood education centers and grocery stores selling healthy food,” said Roubinov. “Our study indicates that the quality of a neighborhood where a child grows up is one of several factors that can have a protective effect on their health.”

The researchers also asked teachers and parents of the kindergartners, who were enrolled at six public schools in the San Francisco Bay Area, to report on the children’s overall health and any impairments that may prevent them from participating in desired activities. They found that the 113 low-income children living in poor neighborhoods were in the 75th percentile when it came to such health issues, while the 32 low-income children in better-resourced neighborhoods scored in the 55th percentile.

The work follows a 2011 government study that found when low-income adults moved to wealthier neighborhoods as a result of a voucher housing initiative, the prevalence of obesity, diabetes and other self-reported health limitations improved. “Taken together, such results suggest that infusing a neighborhood with resources across various domains could influence the negative effects of a family’s economic status,” said Roubinov. “Initiatives such as supportive social services, efforts to improve neighborhood safety and housing quality, and redesigning parks and open spaces may offer physiological and physical benefits.”

The study was funded by the National Institute of Mental Health, the MacArthur Foundation Research Network on Psychopathology and Development, and the Canadian Institute for Advanced Research.