In 2017, UC San Francisco received more biomedical research funding from the National Institutes of Health (NIH) than any other public institution, continuing a 10-year trend, according to annual figures from the NIH. In addition, UCSF was the second-highest grant recipient among all public and private institutions nationwide.

UCSF’s Schools of Medicine and Pharmacy ranked first among their peers nationwide in NIH funding for their biomedical research and graduate-level training, while the Schools of Dentistry and Nursing ranked second in their fields.

Overall, researchers in the University’s four schools of Dentistry, Medicine, Nursing, and Pharmacy, the majority of whom are also affiliated with the UCSF Graduate Division’s doctoral and postdoctoral training programs, were awarded $593.9 million in NIH grants and research contracts in 2017, comprising a 2.8 percent increase over 2016.

These highly competitive funds enable UCSF scientists to pursue research aimed at advancing understanding of human health and disease, and developing new therapies for neurological diseases, cancer, diabetes, cardiovascular disease, and a host of other conditions.

“UCSF is honored to once again be among the nation’s leading recipients of these competitive grants. As a public institution, it is our privilege to pursue research that improves the health of all Americans,” said UCSF Chancellor Sam Hawgood, MBBS. “These funds empower our researchers, students, and trainees to be transformative leaders in their fields, driven by their curiosity to decode the fundamental principles of life and their passion for leveraging those basic discoveries to advance patient care and health equity.” 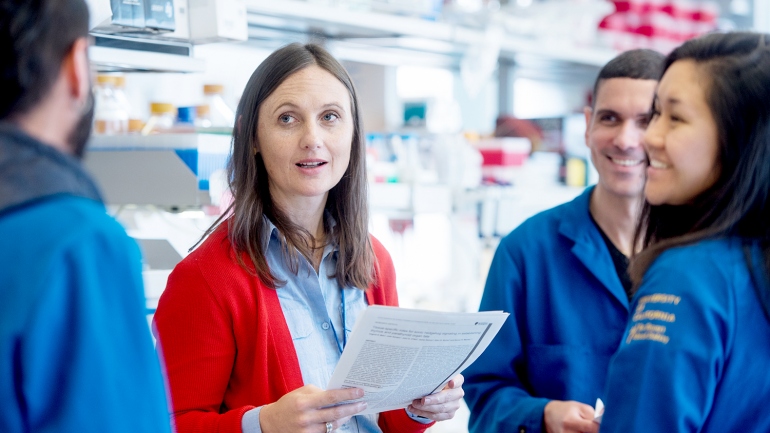 Top Researchers and Their Work

UCSF researchers are changing the way we approach health and health care. Learn about some of the top NIH-funded scientists and their research.

The UCSF School of Medicine’s research, graduate-student training and fellowships for postdoctoral scholars topped the list of NIH funding for medical schools for the sixth year in a row, with $527 million in grant support. The UCSF School of Pharmacy ranked first in NIH grants for 2017 for the 38th consecutive year, with $34.3 million in grants supporting the school’s fundamental and clinical research and graduate training programs.

All told, UCSF received 1,242 grants totaling $588.9 million in 2017 – including $69.2 million for long-term, specialized research centers on campus – with an additional $5 million in NIH contracts, a term for agreements under which UCSF scientists perform specific projects for the national research institutes.

For the ninth year in a row, UCSF also ranked among the top five institutions nationally in NIH training grants, receiving $25.5 million in these awards, which provide crucial support for the early careers of future leaders in scientific research.

“Almost all our PhD students and postdocs receive support from the NIH, as members of training grant programs, as recipients of individual awards, and as participants in research by UCSF faculty, a majority of whom are affiliated with one or more of our graduate training programs,” said Elizabeth Watkins, PhD, dean of the UCSF Graduate Division and vice chancellor of student academic affairs. “Our trainees also make a tremendous contribution to faculty members’ ability to obtain federal funding for their labs. They are truly the engines that drive the research enterprise at UCSF.”

UCSF’s top ranking in NIH funding reflect the University’s excellence in research and education across multiple health-science arenas, as well as the scope of the University’s $5.4 billion discovery, instruction, and patient-care enterprise, which generates more than $8.9 billion in economic benefit to the local economy through creating jobs, spinning off new companies and products, and providing health care to the San Francisco Bay Area and beyond. Federal funding contributes to this economic benefit by enabling grant recipients to purchase materials and instruments and employ laboratory staff, and by driving the development of new technologies and industries.