If a car were a microscopic living thing, how would biologists study it?

Bo Huang, PhD, professor of pharmaceutical chemistry, began this year’s Byers Award Lecture in Basic Science with that question, which is inspired by his young sons’ fascination with cars. 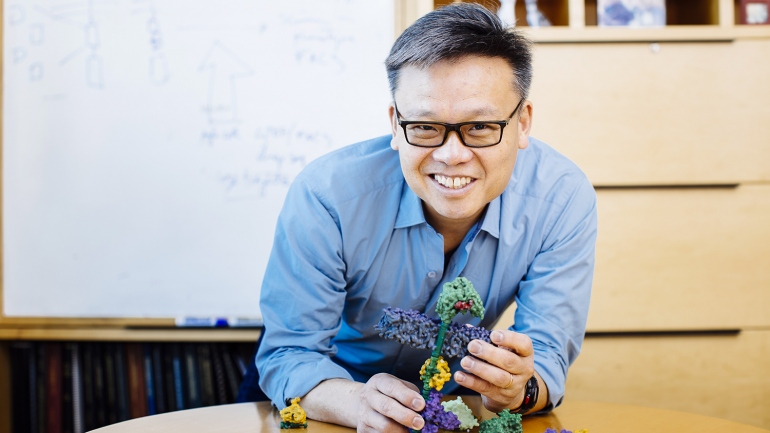 Brook and Shawn Byers have established the Byers Distinguished Professorship, which will be awarded to Wendell Lim, PhD.

For instance, Huang said, if researchers wanted to understand the function of the wheels, they might take a genetics approach and create a car without wheels – a wheel “knock-out” car. Taking a biochemical approach, they might purify the wheels and note its friction reducing properties. They could take a synthetic biology approach and try to, well, reinvent the wheel.

Or, in the microscopy approach that Huang specializes in, they would make a movie that reveals the wheels at work.

In his talk titled “Lights, Camera, Action: Redefining Microscopy to Illuminate Life and Disease,” Huang highlighted the microscopy work in his lab that has enabled a clearer understanding of the function of cells and the processes that underlie disease. The lecture was held Jan. 17.

The Byers Award in Basic Science is awarded annually to recognize and support the outstanding research of a mid-career faculty member. Huang is also professor of biochemistry and biophysics and a Chan Zuckerberg Biohub Investigator.

“We’re trying to identify problems in biology and medicine that are difficult to study because there hasn’t been a proper technique to do it,” said Huang. “We are developing the techniques so that we can see the systems and study these problems using microscopy approaches. And now we’re further expanding our microscopy approach not just at the cellular level but so we can see things more clearly even at the molecular level.”

Using a CRISPR/dCas9 system that labels parts of the genome with fluorescent tags, Huang and his collaborators have been able to image the genome in living cells, see telomeres (the protective caps on the ends of chromosomes), and watch sister chromatids separate during cell division. They have been able to see how a two-meter long genome is packed inside a cell nucleus only five to 10 micrometers wide.

“It is immensely interesting to understand how our DNA is packaged,” said Huang. “The physical explanation is important to the regulation and fate of the cell.”

By systematically labeling different proteins inside cells and visualizing their interactions, the Huang lab has also made progress in understanding interactions that cause disease, such as uncontrolled cell growth in cancer.

And they have pushed the boundaries of what can be seen. Conventional light microscopy is limited to a spatial resolution of about 250 nanometers.

“Because of the physics of light, anything smaller than half the wavelength of light, you’ll just see a total blur,” said Huang.

His team has developed super-resolution microscopy techniques that allow resolution of 20 nanometers. At this higher resolution, they could visualize cellular projections known as cilia and observe defects in the molecular architecture that underlie diseases such as Joubert syndrome.

“Here are UCSF, we’re at a unique time and a unique place to move some of the bigger questions for society forward,” said Sam Hawgood, MBBS, UCSF chancellor and the Arthur and Toni Rembe Rock Distinguished Professor, in his opening remarks. He said Huang was emblematic of the convergence of tremendous advances in technology with tremendous advances in the biomedical sciences.

“As those two things come together, I truly believe we’re at an inflection point and we will see an acceleration in our ability to answer some of the really fundamental questions that still bedevil us in the biologic sciences.”