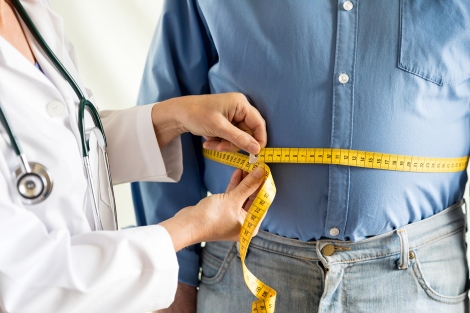 UC San Francisco researchers have discovered a new biological pathway in fat cells that could explain why some people with obesity are at high risk for metabolic diseases such as type 2 diabetes. The new findings – demonstrated initially in mice and supported by data from human patients – could lead to new biomarkers to predict who is at risk and guide treatments to reduce the medical burden of obesity.

More than one-third of adults in the U.S. are considered clinically obese, and the number of people with extreme obesity (BMI over 40) has doubled in the past two decades, according to data from the Centers for Disease Control and Prevention (CDC). Obesity has been linked to many dangerous health conditions, including type 2 diabetes. However, recent research has revealed that only a minority of people with obesity are actually at higher risk of diabetes than the general population.

“It turns out that only about 30 percent of people with obesity are really high risk. The problem is that fundamentally we don’t know why some people with obesity go on to develop diabetes and others don’t,” said Suneil Koliwad, MD, PhD, assistant professor in the UCSF Diabetes Center and one of the new study’s two senior authors.

The new findings, published Jan. 9, 2018, in Cell Metabolism, suggest that the link between obesity and diabetes may depend on fat cells’ ability to control adipose fibrosis – an accumulation of collagen in fat tissue that cause it to become stiff and inflexible – which is known to be linked to increased inflammation and metabolic dysfunction.

The research was initiated by the lab of Shingo Kajimura, PhD, an associate professor of cell and tissue biology in the UCSF School of Dentistry, member of the UCSF Diabetes Center and the paper’s other senior author. Kajimura is known for discovering that human fat cells can shift between two states – energy-storing white fat and energy-burning beige fat, which helps your body generate heat in response to cold temperatures. Kajimura’s team had previously shown that mice with more beige fat are protected against obesity and diabetes, and has been working to identify the biological factors that cause white fat to transform into beige fat, with the aim of developing therapies for obesity.

As part of an unbiased high-throughput screen to identify such cold-sensitive molecules, Kajimura’s team has now identified a new signaling molecule in fat cells that appears to reduce the risk of obesity and metabolic disease in mice by a totally different mechanism. The molecule, a transcription factor called GTF2IRD1 – also responds to cold temperatures, but rather than causing beige fat cells to burn more calories for heat, it acts by reducing fat cells’ production of the collagen molecules that contribute to fibrosis in fat tissue.

“These were surprising and exciting results,” Kajimura said. “We used to think that adipose tissue fibrosis was just a consequence of “unhealthy fat,” but this study suggests that fibrosis is an important therapeutic target to prevent obesity and metabolic disease in humans.”

Subcutaneous Fat Versus That Stored in Abdomen

Based on these findings, Kajimura struck up a collaboration with Koliwad’s lab, who analyzed the expression of GTF2IRD1 by fat cells in a cohort of 48 human subjects with varying degrees of obesity participating in Koliwad’s ongoing Inflammation, Diabetes, Ethnicity, and Obesity (IDEO) study.

The researchers discovered that GTF2IRD1 levels inversely correlated with the amount of fibrosis in the subcutaneous fat tissue of these individuals: people with the highest levels of the transcription factor almost universally exhibited less fibrosis, while those with the lowest levels of GTF2IRD1 had more fibrosis.

The researchers also found a strong correlation between GTF2IRD1 levels and a healthier distribution of body fat. Previous research has shown that people who store their fat under the skin of the arms, hips, legs, and buttocks – termed subcutaneous fat – have much lower risk of diabetes than those whose fat is primarily concentrated in the abdomen.

“This study puts a lot of earlier research in context,” Koliwad said. “Our findings suggest that people whose fat cells are predisposed to produce a lot of collagen develop fibrotic hardening of the subcutaneous fat, essentially turning those fat stores into concrete, and making additional fat more likely to spill over into the abdominal cavity, where it builds up around organs like the liver, pancreas, heart, and muscles, and wreaks havoc, triggering the inflammation and metabolic damage that leads to diabetes.”

The researchers say that the new findings could help identify people with obesity who are predisposed to fibrosis and assess whether new drugs targeting GTF2IRD1 or existing anti-fibrotic drugs already being developed for fibrotic diseases – for example in the lung and liver – might be able to prevent these patients from developing diseases like diabetes.

They also hope to explore whether differences in fat fibrosis and distribution may explain why people of certain ethnic groups, for example people of Asian descent, seem to be especially prone to developing diabetes in the context of obesity.