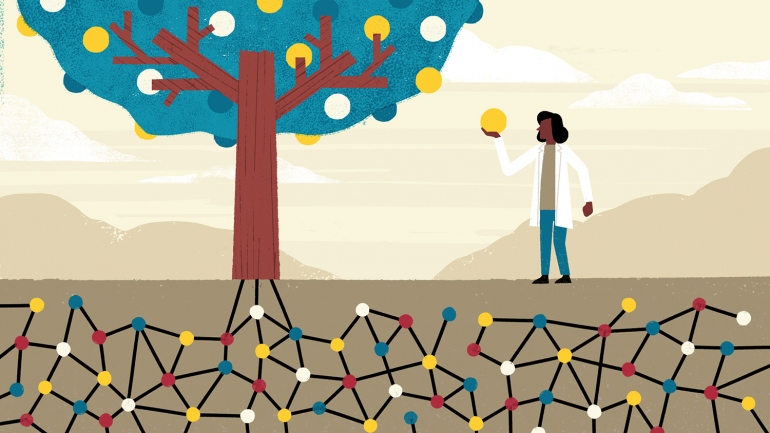 The source of the common hospital-acquired infection known as C. diff can be hard to pin down in a busy, sprawling hospital, where patients might pick up the bug in countless locations.

Hospitals nationwide are eager to reduce C. diff infections. A few years ago, when the UCSF Medical Center set a priority to cut rates of the infection, the UCSF Health Informatics team pitched an unusual strategy: Digitally reconstructing each patient’s footsteps in the hospital.

The team realized that within each patient’s electronic health record (EHR) was detailed information about every room each patient had stepped into for every test. Using these digital breadcrumbs mined from the records, the team was able to trace a significant source of infection back to one CT scan machine.

It was the first time that EHRs were used in a hospital setting in such a way.

EHRs – in many ways still in their adolescence since coming into widespread use just in the last decade – alternately have been viewed as a time-consuming burden to doctors and as a gateway to smarter, safer and more accessible health care.

More and more, the promise of EHRs turning data into knowledge is beginning to bear fruit. Work like the C. diff case, recently published by assistant professor of medicine Sara Murray, MD, and collaborators in JAMA Internal Medicine, “is a brilliant example of how we can learn from data in the electronic health records,” said Robert Wachter, MD, professor and chair of UC San Francisco’s Department of Medicine.

The true power of EHRs may lie in places that haven’t been fully explored yet – in the vast troves of patient data that could be mined for precision medicine and the shifting workflow of the hospital as information travels faster and more freely.

That is why Wachter and others at UCSF are among those worldwide looking to improve how EHRs are used and to better tap into information within those records – in ways that could transform health care.

So far, the most salient changes brought by EHRs are improving the storage and speeding the flow of information through the health care system. Gone are the shelves of paper medical records that used to line doctor’s offices, stuffed with documents that had to be sent by courier, mailed or faxed when needed.

Now EHRs allow for notes to be shared digitally between clinicians treating the same patient, and test results can be retrieved from the lab and prescriptions sent to the pharmacy instantaneously. EHRs have essentially eliminated the problems of misread handwriting and lost paper prescriptions.

Ideally, records would flow seamlessly from provider to provider, but one notable area of weakness for today’s EHRs is communication between systems, known as interoperability. The problem stems from different EHR companies – a handful dominate the market – building their own systems that don’t talk to one another.

A study by Julia Adler-Milstein, PhD, associate professor of medicine and director of the Center for Clinical Informatics and Improvement Research at UCSF, found that in 2015, more than half of hospitals nationwide did not have access to outside patient information. That leaves open the possibility that doctors could be treating patients without access to their full medical history – just the opposite of what EHRs were meant to do.

“One of the reasons I’ve studied interoperability is that there’s nothing scarier than having a physician making a decision without all the pieces of relevant information,” said Adler-Milstein.

Streamlined access to a patient’s medical records only scratches the surface of EHRs’ potential. In years to come, doctors will base their decisions on not only a single patient’s comprehensive medical history, but the lessons learned from populations with similar problems.

When a surgeon recommends a procedure to a patient today, she or he may rely on personal experience, that of colleagues, and relatively small-scale studies published in academic journals. A surgeon of the future could ask an intelligent algorithm to analyze the outcomes of hundreds of similar surgeries that had been documented with EHRs.

“The EHR should be something that is an augmentation to our knowledge set,” said John D. Halamka, MD, MS, the chief information officer of Beth Israel Deaconess Medical Center and professor at Harvard Medical School.

As Halamka, an alumnus of UCSF’s Medical Scientists Training Program, knows from personal experience, such queries already are technically possible. Six years ago, his wife was diagnosed with stage IIIA breast cancer. Using i2b2, an open-source tool that analyzes de-identified data from large sets of EHRs, he was able to find out the most effective treatment for the last 10,000 women of similar age and background that had been treated for the same tumor. His wife was treated successfully.

If the first incarnation of EHRs are “dumb databases” that simply gather information, said Halamka, future incarnations will be able to extract valuable conclusions from the data. Instead of waiting for a specific query from a doctor, these systems may “think” in real-time, offering suggestions as a patient’s status changes.

As a step in that direction, UCSF is one of five UC Health systems that have joined an effort to integrate their EHRs, which comprise more than 15 million patient records, creating the largest collection among academic health centers to date. Led by UCSF’s Institute for Computational Health Sciences and headed by Atul Butte, MD, PhD, the project will not only smooth the exchange of information, but lay the groundwork for data-driven experiments that could lead to new drugs and more precise medical care.

Medicine, an industry that long relied on paper records, is gradually reconfiguring itself to take full advantage of EHRs. There are signs here and there that EHRs are already altering the traditional workflow in the hospital.

At three UCSF Medical Center hospitals, for example, all diabetic or hyperglycemic adult inpatients are now monitored by a virtual glucose management service. Robert Rushakoff, MD, MS, an endocrinologist and diabetes expert, can follow the blood sugars and treatment of each patient through a dashboard and, if needed, place a note in the patient’s chart with recommendations for insulin adjustments.

Previously, a physician had to request a formal endicrinology consultation and it could take all day for every patient to be seen. The remote intervention takes less than 45 minutes each morning, and often allows Rushakoff to catch problems before they would warrant formal consultations. Since the virtual system was implemented, the number of patients with high or low glucose levels has dropped by nearly 40 percent.

“These are the kinds of innovations that are crucial if we are to take full advantage of EHRs to change the world of health care,” said Wachter.

For EHRs to become fully integrated into the practice of medicine, he says it’s helpful to take a step back and ask, “If you were inventing it now, what would it look like?”

Wachter predicts new categories of health care workers. Someone, for example, may have the job of monitoring patient data in real time, like an air traffic controller, and alert physicians when they are needed.

A Rapid and Bumpy Transition

For now, however, the growing pains of EHRs are familiar to every physician.

The adoption of EHRs occurred with great speed, spurred initially by $30 billion from the Health Information Technology for Economic and Clinical Health (HITECH) Act of 2009. In 2008, only 10 percent of hospitals were using EHRs, whereas today, only 10 percent are not.

“We got to give credit for moving from a paper-based process to a digital process in real rapid time, but unfortunately we lost the hearts and minds of our doctors and nurses,” said Halamka.

Unwieldy and complex EHR systems have been cited in physician burnout nationwide. A study last year found that physicians now spend 49 percent of their work day on EHR and desk work and only 27 percent on direct clinical face time with patients.

In addition to the ever-growing fields of information to input, doctors are also managing emails from patients, many of whom now see their own health records through online patient portals. Access to doctors can help patients feel more connected, but creates hours of new work for providers outside their work day.

In the initial push towards EHRs, the systems were described as a technical rather than an adaptive change, said Adler-Milstein. “There wasn’t a recognition of just how impactful and wide-reaching the change would be, that it would change every aspect of medicine,” she said.

Some usability issues will be resolved with incremental improvements from the major EHR vendors, but ultimately workflows will have to adapt.

“I think we’re at the beginning of the post-EHR era,” said Russ Cucina, MD, MS, chief health information officer for UCSF Health. “We spent the last decade implementing EHRs. Now we have to the task of understanding how EHRs have changed the practice of medicine, and then changing the EHRs so we can change medicine in the ways that we want to.”

Moving Into the Future

Many say the real transformation in patient care will come from collaborations with Silicon Valley. “A lot of innovation will come not so much from the EHR itself, but all of the peripherals and the ecosystem around the EHR,” said Wachter. He compares the EHR to a smartphone, a powerful platform, but only as useful as the apps it can run.

At UCSF’s Center for Digital Health Innovation, these collaborations have already yielded mobile applications that help patient monitor their own health, as well as technology to assist doctors, like artificial intelligence that can read chest X-rays and detect a collapsed lung, known as pneumothorax.

The use of patient data collected in EHRs raises questions of privacy, but attitudes are likely to shift as people see the benefits of sharing their data, for their own health and for the advancement of medical knowledge.

“The notion is the patient would decide what data is shared, for what purpose and with whom,” said Halamka. “Patients will each have different preferences, but more and more people will share if it is of value to them.”

For nearly a decade, EHRs have been amassing medical data that are now sitting in servers. The real loss would be to keep that information locked away, said Wachter. “It’s immoral to collect all this data and not be using it to make care better.”