The 10 institutions have founded a Coalition for Next Generation Life Science because of a concern that many new PhD graduates and postdoctoral scholars (the apprenticeship many scientists serve immediately after graduate school but before landing a permanent position) are focusing their job searches solely on a limited number of traditional faculty positions, rather than on the much broader array of non-traditional careers available to people with scientific training. 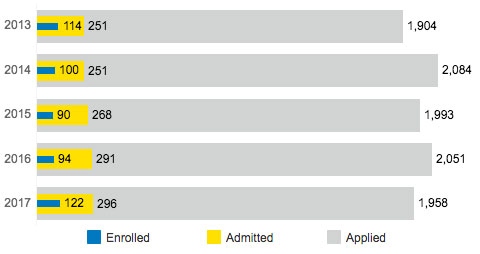 The presidents and chancellors of the founding institutions announced the initiative in a jointly authored article published in the Dec. 15 issue of the journal Science.

Only about 10 percent of U.S. biomedical scientists land tenure-track faculty positions at U.S. institutions within five years of graduating with a PhD, according to studies cited in the paper. Among the constraints on the academic job market, the article says, is a nearly 20 percent decline in inflation-adjusted federal research funding from 2003 to 2016. That decline limits hiring by universities and other nonprofit research institutions that receive federal research support.

“Innovations in the biomedical sciences are driven by the creative ideas of our graduate students and postdoctoral fellows,” said UCSF Chancellor Sam Hawgood, MBBS, one of the leaders of the Coalition. “However, we also know that the future careers of many of our trainees lie outside of academia, where their advanced knowledge and analytical skills will continue to benefit society, whether they work in biotech, education, science policy or communications, or any number of other exciting fields. We hope that better data will drive training programs in the life sciences to better prepare our students for the job market they will face when they graduate.”

We hope that better data will drive training programs in the life sciences to better prepare our students for the job market they will face when they graduate.

The Coalition aims to begin posting informative new standardized data on institutional websites in February 2018 and add additional categories of information over the following 18 months.

“In the absence of such information, students are prevented from making informed choices about their pre- and postdoctoral training activities, and universities from preparing trainees for a full range of careers,” the Coalition members write in the Science article.

“UCSF has long been a leader in providing both our graduate students and postdoctoral trainees with outstanding career advice, as well as with opportunities for exploring many different ways of applying both their passion for science and their scientific skills to the world of work. I am very pleased that UCSF is now taking a leadership role in a movement to publicly display the long-term career outcomes for all biomedical sciences alumni, and I commend the new Coalition of ten institutions for its forceful commitment to the major actions underway,” said UCSF biochemist Bruce Alberts, PhD, who has been a leading advocate for reforming graduate education at UCSF and nationally, including during his tenure as the longest-serving head of the National Academy of Science. Alberts currently serves as the Chancellor’s Leadership Chair in Biochemistry and Biophysics for Science and Education at UCSF.

“Institutions that educate biomedical PhDs and postdocs bear important responsibilities not only to train outstanding researchers, but also to create environments that promote successful and efficient completion of training, expand diversity across the enterprise, and enable career exploration and informed choices,” said Keith Yamamoto, PhD, UCSF vice chancellor for Science Policy and Strategy. “The initiative advanced by the Coalition for Next Generation Life Sciences acknowledges those responsibilities. Data transparency will provide insight into the values of our institutions, and may help motivate improved institutional practice and performance.”

The Coalition members will issue statistical reports with information on:

The dearth of faculty positions in the life sciences is well known and many postdoctoral trainees are aware of the odds against them when they search for traditional university jobs, the Science article says. The co-authors write, however, that students and trainees would benefit from appreciating these odds much sooner. They also would be helped by knowing more about the range of options for trained life scientists, such as careers in industry, entrepreneurship, government and science communication.

“The majority of trainees will eventually choose to pursue those careers, but only after having made irreversible investments in what is often more than a decade in training for academic jobs that do not exist,” the presidents and chancellors write. “And at least some of this training activity may be unnecessary for their eventual career choices.”

Some relevant data are available now, but only for a small number of institutions and in formats that do not allow for easy comparison. Comprehensive data in a form standardized across institutions should be a major help, the presidents and chancellors write.

“Open data will allow students and postdoctoral fellows to understand fully the range of likely outcomes of their eventual training and career choices,” they write. “It will help universities to better target their programs to actual career outcomes. … And it can help to hold universities and other research institutions to account for their success in training and placing graduate students.

“Each of these measures,” the co-authors write, “is directed at the cardinal goal of making advanced training in the life sciences more efficient and humane.”

Each Coalition member, the writers say, has also agreed to help graduate students and fellows better explore alternative career paths, improve mentoring, and work to improve diversity in the life sciences workforce. They say they hope other institutions will join the original 10 in the movement for transparency in biomedical career data.

The Gordon and Betty Moore Foundation and an anonymous donor are helping to fund the Coalition. Leading the group’s work are Elizabeth Watkins, PhD, dean of the Graduate Division and vice chancellor for student academic affairs at UCSF, and Peter Espenshade, PhD, associate dean for graduate biomedical education at The Johns Hopkins University School of Medicine.

"Many of our recent trainees are now finding productive careers in areas like data science that barely existed five or ten years ago,” said Watkins. “One of the goals of this initiative is to make sure existing career exploration programs match the workforce of the future.”

The presidents and chancellors say they chose to begin their transparency initiative with life science because of considerable national concern about the field. They added, however, that “the logic of our initiative extends to other scholarly disciplines.” The Coalition’s work could extend in the future to graduate education and training in the natural and physical sciences, engineering, the social sciences and the humanities.

This week, UCSF has begun posting fresh data on graduate student demographics, admissions, median time to degree, and PhD completion rates. The data can be easily accessed via an interactive viewer. Additional data points will be added over the next 18 months, as information on career outcomes for alumni who graduated from UCSF in the past 15 years is collected and tabulated.

Watkins says the data will be expanded in the future to include demographics and career outcomes for postdoctoral researchers. At many universities, postdocs have less support and fewer career development programs available to them because they are considered employees rather than students. By contrast, UCSF opened one of the first few dedicated postdoc offices in the country in the early 2000s, and UCSF's Office of Career and Professional Development offers its services to the University's large population of postdoctoral fellows.

“Across a wide range of work settings, the country needs people who can think critically, reason analytically, solve problems, and deal with large amounts of data,” Watkins said. “The goal is to get PhD students to think about a variety of career options earlier in their training so they can better prepare themselves for the path of their choice.

"Many PhD alumni enter into a postdoctoral position by default, largely because they don’t know what other options are available. For those who are sure they want to pursue faculty positions at research-intensive institutions like UCSF, postdoctoral training makes sense, but for others it's unnecessary and may even sidetrack their careers.”