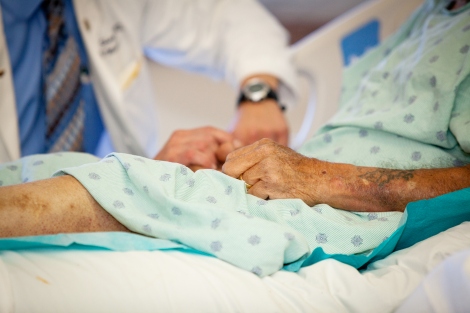 Almost one in five older patients with a chronic disease reported experiencing health care discrimination of one type or another in a large national survey that asked about their daily experiences of discrimination between 2008 and 2014.

The analysis by researchers at UC San Francisco, Stanford University and UC Berkeley found that discrimination reported by black patients declined significantly over the six-year study period, reducing the difference between blacks and whites from 8.2 percent to 2.5 percent. But by far, racial discrimination remained the most common reason cited by blacks for receiving poor service or treatment from doctors and hospitals. In addition to race or ancestry, the survey asked about discrimination by gender, age, religion, weight or physical appearance, physical disability, sexual orientation and financial status.

Researchers said all the groups in the study – black, white and Hispanic – reported high rates of discrimination for one reason or another, and they urged continued monitoring of patients’ experiences, since reported discrimination is associated with worse health, lower satisfaction with health care and lower utilization of health services.

“If people believe they have received unfair treatment in the health care setting, that experience could negatively affect their experience with their providers, their willingness to go to their providers, and their adherence with their treatment, and thereby affect their health,” said Thu Nguyen, ScD, MSPH, a UCSF researcher and the paper’s first author. “It’s still very common, and there’s a long way to go.”

The types of discrimination reported in 2008 by patients with a major chronic health condition varied among groups.

The study, published in the Journal of General Internal Medicine, analyzed biannual responses from 13,897 participants in the University of Michigan’s Health and Retirement Study who were 54 or older and had at least one of the following chronic conditions: hypertension, diabetes, cancer, lung disease, heart disease or stroke. Although the study included a representative national sample, it did not contain enough data on older Asian-Americans with chronic conditions to examine trends over time, so the researchers restricted their analysis to Blacks, Whites and Hispanics.

In 2008, 27 percent of blacks with a major chronic health condition reported experiencing discrimination. The top three reasons for discrimination reported that year were on the basis of race or ancestry (48 percent), age (29 percent) and financial status (20 percent). By 2014, the percentage of blacks who reported discrimination had declined to 20 percent, while the percentage for whites held steady at about 17 percent, and the difference between the two groups was no longer statistically significant. Among whites, the top reasons for reported discrimination in 2008 were age (29 percent), weight/physical appearance (16 percent), gender (10 percent), and financial status (10 percent).

Researchers said it was unclear why blacks reported less discrimination in later years, although the change coincided with medical schools putting increased emphasis on implicit bias training, which aims to root out unconscious discrimination. Reports by blacks fell sharply from 2008 to 2010, but less so between 2010 and 2014, although no changes were observed for the white and Hispanic study participants who were also added in that new cohort.

There was no clear trend for Hispanics over the six-year study period, whose overall rate of reported discrimination started just below that of whites, edged up slightly, and then fell to where it was at the beginning of the study period. The types of discrimination that Hispanics reported most often in 2008 were age (27 percent), race or ancestry (23 percent), weight/physical appearance (14 percent), and financial status (14 percent).

In line with previous research, the current study found that socioeconomic status interacted with reported discrimination in different ways for whites than it did for blacks. The wealthier they were, the less likely whites in the study became to report discrimination of any kind, but this was not true for blacks, who reported the same amount of discrimination regardless of wealth.

“In previous studies, blacks’ reports of discrimination actually increased as wealth increased,” said Amani Nuru-Jeter, PhD, associate professor of epidemiology and community health sciences at UC Berkeley and senior author of the study. “This finding is useful for continued efforts to improve health care experiences and suggests that a one-size-fits-all approach will not suffice.”

The researchers said that patients with chronic conditions require more routine follow-up care than those with acute medical problems, and were therefore more vulnerable to the negative effects of perceived discrimination, which could dissuade them from seeking needed care.

“Providers should be aware that a large fraction of patients will have experienced some form of discrimination in a health care setting,” Nuru-Jeter said. “Just by recognizing how common these experiences are for patients, clinicians may be able to offer better care.”

Other authors are Anusha Vable, ScD, of Stanford; and Maria Glymour, ScD, of UCSF.