Nevan Krogan, PhD, is a mapmaker, but the object of his exploration is not any newfound continent or alien world. Instead, he and his colleagues map cells. Rather than cities, towns and interstates, these maps show proteins, genes, and the shifting, convoluted network of interactions between them.

Learning to read these maps, Krogan believes, is key to the future of precision treatments for diseases from tuberculosis to Tourette disorder.

“At the cellular level, I see no distinction between being infected with HIV and having cancer. It’s just a set of proteins that are behaving badly to put the cell in a disease state,” said Krogan, who is director of the Quantitative Biosciences Institute (QBI) and a professor of cellular and molecular pharmacology at UC San Francisco and a senior investigator in the academically affiliated Gladstone Institutes.

Krogan’s insight is that nearly all diseases are fundamentally mechanical problems at the level of our genes and the microscopic protein machines they produce and regulate. The challenge is that the vast number of genes and proteins in human cells can influence one another in complex, hard-to predict ways.

Currently, researchers tend to study the genes and proteins responsible for disease in isolation, but they are missing the big picture, Krogan believes.

Armed with complete maps of how genes and proteins interact in human cells, researchers could finally see how dozens of seemingly unrelated genes and proteins involved in a disease are in fact all part the same interconnected biological pathway. What’s more, increasing evidence suggests that the same defective biological pathways may be involved in disorders as different as autism and cancer.

Based on this unifying framework for understanding human disease, researchers at QBI, under Krogan’s leadership, along with colleagues at UC San Diego and UC Berkeley, have founded three ambitious map-making initiatives that aim to reshape three major pillars of human medicine: infectious disease, cancer and psychiatric disorders.

From the Human Genome Project to Precision Medicine

The drive to map cells grew out of the successes – and the shortcomings – of the Human Genome Project. Completed in 2003, the project sequenced every gene in our genome, but fell short of hopes that the purpose and function of each gene would become immediately clear.

“What the Human Genome Project gave us is like the first page of an IKEA manual. It only lists the parts,” said Trey Ideker, PhD, a professor of medicine at UC San Diego and co-director with Krogan of the Cancer Cell Map Initiative (CCMI). “How these genes and gene products, the proteins, are tied together is the rest of the manual – except there’s about a million pages worth of it. You need to understand those pages if you’re really going to understand disease.”

At the time the Human Genome Project was rushing toward its finish, Krogan was a graduate student at the University of Toronto studying brewer’s yeast, Saccharomyces cerevisiae, an easy-to-grow organism beloved by geneticists. Over the course of his PhD, Krogan developed and used techniques for systematically measuring how proteins physically and functionally interact with one another. With these techniques in hand, Krogan realized that generating maps of protein interactions could be a key first step toward writing the rest of the cell’s genetic instruction manual.

“The proteins are the functional unit of the cell,” said Krogan. They provide structure, pass signals, and control metabolism and development. Measuring how proteins and genes interact means gaining a direct view of the current state of a cell. “We now have powerful mass spectrometry technology and CRISPR/Cas9-based genetic tools to generate maps of how these proteins interact in mammalian cells.”

Mapping the Path of Infectious Diseases

Krogan came to UCSF in 2006 as a Sandler Faculty Fellow, intent on using his new techniques to map out how HIV infection changes how proteins interact within immune cells, work which was carried out in the context of the NIH-funded HIV Accessory and Regulatory Complexes (HARC) Center, which Krogan leads.

The first cell-mapping consortium grew out of this work, along with a collaboration with Jeffery Cox, PhD, then a professor of microbiology and immunology at UCSF, who had realized that a protein-protein interaction map could be invaluable in studying how the tuberculosis bacterium is able to enter host cells without being destroyed by the host’s immune system.

“We had particular expertise in the system of TB and host cells, and Nevan had these great techniques for understanding how these interacted with each other,” said Cox, now a professor of molecular and cellular biology at UC Berkeley. “It was a very natural collaboration between two different worlds.”

Now, Cox, Krogan, and a consortium of researchers at UCSF and UC Berkeley – including gene editing pioneer Jennifer Doudna, PhD, a professor of biochemistry, biophysics and structural biology at UC Berkeley and adjunct professor of cellular and molecular pharmacology at UCSF – are expanding this approach to a plethora of other infectious diseases, under the umbrella of the Host Pathogen Map Initiative (HPMI), mapping interactions between the proteins of human host cells and viruses such as HIV, dengue, Zika, and influenza; bacteria such as tuberculosis and chlamydia; and many other pathogens.

Charting the Genetic Failures that Lead to Cancer

Cancer was an obvious next target for cell mapping, characterized as it is by the systematic failure of genetic pathways that control cells’ growth and death. Cancer’s mutations also vary over time, often becoming resistant to initial therapies, so being able to find the best possible treatment the first time would be a boon to physicians.

To launch the Cancer Cell Map Initiative (CCMI), Krogan and Ideker joined forces with Jennifer Grandis, MD, a professor of otolaryngology-head and neck surgery at UCSF, who had previously worked with Ideker to identify genetic differences in patients who responded to different cancer drugs.

The team is currently looking retrospectively at patients with head and neck cancer and breast cancer to match successful treatments to the mutations that were present in the patients’ tumors, and has already succeeded in shedding light on cases that would previously have stymied researchers: revealing that certain cancerous mutations without any known treatment actually lie on larger biochemical pathways that can be influenced by existing drugs.

“Different tumors are very, very different genetically, but if you overlay them on top of genetic pathways, there’s much more commonality. This means our models can be more predictive of how the cancer cells will act and react,” said Krogan. “We’re identifying brand new cancer proteins and genes, and therefore brand-new targets for treatment.”

In 2018, Grandis aims to start recruiting for a clinical trial that will use these networks to assess how a new targeted therapy alters the web of interacting proteins within tumor cells, in hopes of better understanding what causes patients’ cancers to respond or develop resistance to therapy."

The CCMI’s innovative approach has drawn support from wide quarters, gaining recognition from the National Cancer Institute as one of five National Research Centers for Cancer Systems Biology and receiving a prestigious Innovation Award from the Roddenberry Foundation.

Most recently, Krogan has teamed up with Jeremy Willsey, PhD, an assistant professor with the UCSF Institute for Neurodegenerative Diseases, and Matthew State, MD, PhD, professor and chair of psychiatry at UCSF, to found the Psychiatric Cell Map Initiative (PCMI).

The PCMI immediately faces several challenges in mapping gene pathways in psychiatric disorders – these disorders are numerous and diverse; they can develop over many years or even decades; and they involve the human brain, which is arguably the most complex object in the universe.

“One of the challenges in psychiatric disorders is that there’s little agreement over what the underlying pathological mechanisms are, which complicates diagnosis and development of effective therapeutics,” Willsey said. “Protein and genetic interaction mapping could open that black box to find how genetic risk factors actually cause psychiatric disorders, potentially revealing therapeutic targets.”

Willsey and State, both members of the UCSF Weill Institute for Neurosciences, have already made rapid progress unraveling the genetic basis of psychiatric disorders including autism and Tourette Disorder by looking for extremely rare mutations presented in affected children but not unaffected relatives. These mutated genes act as a starting point from which to explore what other related cell systems and pathways may play a role in the disease.

“Having these precise maps of how these genes and proteins fit into larger cellular networks allows us to make predictions about which pathways treatments should target, and then test these predictions in a targeted manner in model systems,” Willsey said.

Like the other initiatives, PCMI researchers benefit from the mapping research in other labs across all three mapping initiatives. 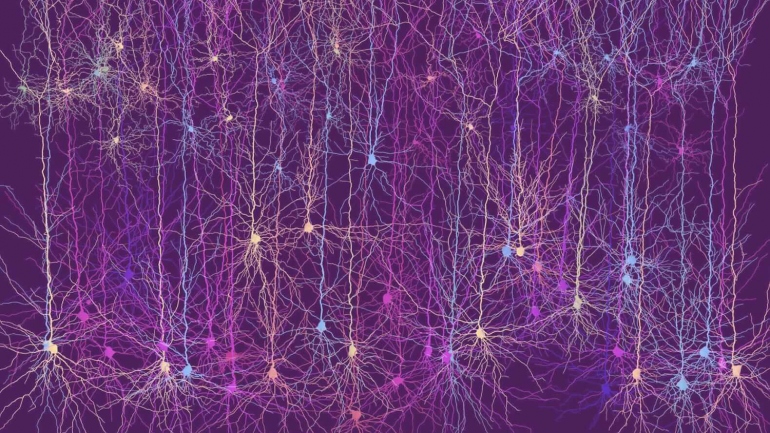 “Seeing overlap between disorders will help in understanding why a given mutation might lead to schizophrenia in one case or autism in another,” Willsey said. “We already see that a lot of autism genes are cancer genes. We don’t know what that means, but the more genes we map the better we can understand that overlap.”

For Ideker, the overlap is the point of the initiatives. His lab produces computer models to predict how cells will respond to disruptions – from cancer-causing mutations to viral attacks. For these models to make sense of the data, they require ever more complex contextual data about how different cellular components are interrelated.

From genes to protein complexes to cell-spanning signaling networks, the layers of data Ideker feeds the models help them predict how cells will react more and more accurately. “We want to capture all the cellular interactions that we’re finding in these initiatives, and everything else that’s out there,” he said. “We’ll model the entire cell, at every level.”

Recently the three cell mapping initiatives held their first annual Cell Mapping Symposium, featuring scientists from all three initiatives and hundreds of guests, who overflowed the lecture hall at the Gladstone Institutes and spilled over into satellite rooms. Krogan was ecstatic at the response.