UC San Francisco researchers recently captured exquisite images of a protein caught in the act of binding to a novel therapeutic drug with enough resolution to model how the individual atoms of the protein and drug lined up.

Until recently, such a feat would have been considered impossible, but in the past five years, such breakthroughs have become almost commonplace here, part of a resolution revolution being led by UCSF researchers.

Thanks to their recent advances in cryo-electron microscopy (cryo-EM) – a technique whose inventors were honored with the 2017 Nobel Prize in Chemistry – these researchers have enabled rapid progress in the search for more precise and powerful therapies for a wide array of human diseases.

Proteins are tiny molecular machines that power everything our cells do – and they are also the primary targets for pharmaceutical drugs. Discovering how new proteins work could lead to lifesaving therapies for cancer or new painkillers with less danger of addiction.

But to truly understand how proteins function, researchers must be able to visualize them at an atomic scale. Previously this required painstakingly growing crystals of a protein – a process which could take years to get right – then shooting X-rays through the crystals to calculate the protein’s atomic composition. Unfortunately, many of the most interesting proteins and complexes cannot be crystallized.

Cryo-EM has been around since the 1970s, but since 2013 technical advances pioneered in part by UCSF’s David Agard, PhD, and Yifan Cheng, PhD, have dramatically improved cryo-EM’s ability to resolve both the tiniest and the most complex of proteins in stunning detail, transforming the electron microscope from an old-fashioned back-of-the-lab workhorse to the newest scientific super-star almost overnight.

This cryo-EM renaissance was spurred by Agard and Cheng’s efforts to develop camera hardware and software capable of detecting single electrons – a goal that had long been considered impractical by the field, but which the duo accomplished by bringing together scientists and engineers at UCSF, Lawrence Berkeley National Laboratory, and Gatan, a Pleasanton, Calif., company that makes EM cameras.

“Not long ago the entire field thought counting single electrons would never work,” Cheng recalls. “But at UCSF, the culture nurtures us to do things that everybody else thinks are impossible.”

Despite the skepticism of many of their peers, Agard and Cheng – both of whom are professors of biochemistry and biophysics at UCSF and Howard Hughes Medical Institute investigators – recognized that capturing single electrons was critical to electron microscopes’ ability to resolve key biological proteins in sufficient detail to allow scientists to understand their function.

“It’s not just a matter of seeing proteins a little more clearly,” Agard explained. “There’s a precise point where you go from seeing rather useless blobs to being able to directly interpret a molecule’s structure. Electron-counting cameras really provided a quantum leap in our ability to understand a protein’s underlying chemistry – both how it functions and how you could design drugs that bind to it.”

Since their first blockbuster paper in 2013 demonstrating that the new cameras and software could resolve proteins in near-atomic resolution, the technology has seen wide adoption by the field. It has also made possible great advances in Cheng and Agard’s own research, such as Cheng’s collaboration with David Julius, PhD, chair of the Department of Physiology at UCSF, to understand proteins key to the sensation of pain, which could be targeted by a new generation of pharmaceuticals. It also made possible discoveries in Agard’s lab about proteins that help other proteins maintain their proper shape, a process that has major implications for cancer and diseases such as Alzheimer’s disease that are characterized by misshapen proteins.

Another leading cryo-EM researcher at UCSF, Adam Frost, MD, PhD, who joined the university as an assistant professor in 2014 to take advantage of the power of this new technology, has been leading efforts to use cryo-EM to determine how new classes of drugs bind to their target proteins at the atomic level.

“Cryo-EM is now allowing us to study proteins at a level of detail that would never have been possible just a few years ago,” Frost said.

Frost and Cheng have also been using cryo-EM to understand how signaling proteins on the surfaces of cells – key targets for pharmaceuticals from pain killers to cancer therapies – are influenced by the cell membranes in which they float and how proteins can bend and shape the membranes. Notably, the ability to examine the structure of proteins in their native membranes – which had also been considered impossible by the field – was achieved for the first time in 2016 by a close collaboration between Cheng and Julius.

The recent work with cryo-EM has been so successful that many researchers at UCSF have begun clamoring for a share of the limited microscopy time available on shared scopes. Fortunately, with the acquisition earlier this year of new fully automated cryo-electron microscopes, including a $5 million state-of-the-art Titan Krios system funded by the Howard Hughes Medical Institute, a $6 million Titan Krios funded by an anonymous donor for the UCSF Institute of Neurodegenerative Disease – part of the UCSF Weill Institute for Neurosciences – and a $3 million Arctica system funded by the National Institutes of Health and UCSF, more and more researchers across the University and the Bay Area will be able to take their research to the next level. 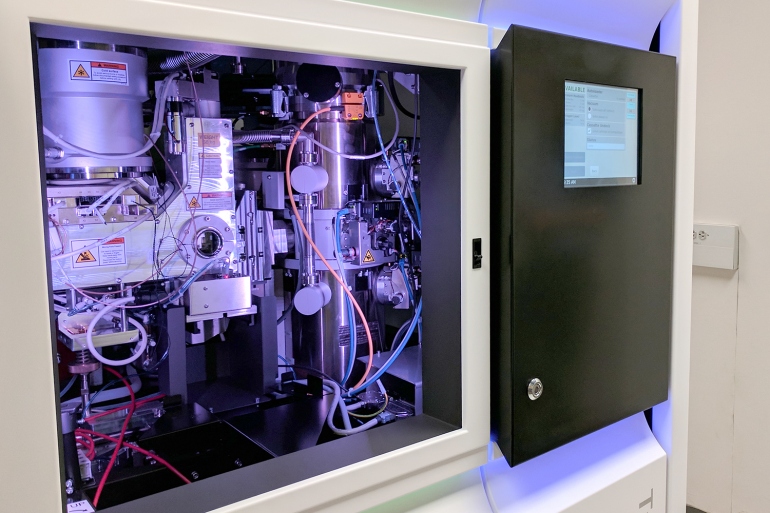 Agard sees the cryo-EM revolution as closely synergistic to other burgeoning efforts on campus to completely map out the biology of disease, such as the work of Nevan Krogan, PhD, the director of UCSF’s Quantitative Biosciences Institute, who is mapping the common networks of genes and proteins that drive diseases ranging from cancer to HIV to schizophrenia; and the work of Brian Shoichet, PhD, whose lab in UCSF’s School of Pharmacy uses protein structures to computationally design custom drugs that fit like lock and key into target proteins.

“There is a remarkably integrated pipeline being developed at UCSF, with new technologies and approaches feeding off one another to advance our knowledge of the biology of disease at every level,” Agard said. “This is beginning to have a huge impact all around campus, but now we need to scale it up to lower barriers and speed the transition from images to therapies.”