The strength of human teeth is mostly because of its hard, outer layer of enamel – a material that weakens over time as we chew food or grind our teeth.

When teeth are weakened, dental professionals can fill cracks or other holes with foreign material, but most isn’t as hard as our natural enamel. 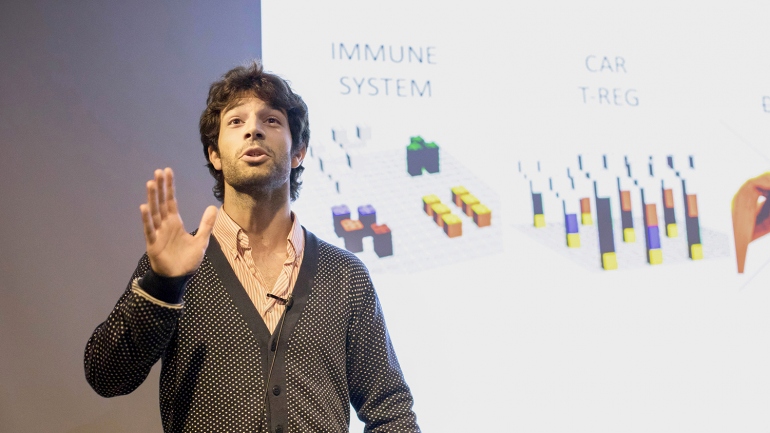 Sarah Engelberth, PhD, who is a postdoctoral scholar in the lab of Stefan Habelitz, PhD, a professor of preventive and restorative dental sciences in the School of Dentistry, won the second annual UCSF Postdoc Slam for her talk about research to generate a material that mimics natural enamel.

“We’re an important step closer to having a backup plan for those of us who might not be so careful with our teeth,” she said.

The competition, held in front of a packed Byers Auditorium in Genentech Hall at Mission Bay on Sept. 19, challenged postdocs to describe their complex, nuanced research in three minutes or less, using language that non-specialists can understand.

“Our purpose in running this contest, and its sister event for graduate students, is to incentivize our early-career researchers to hone their communications skills,” said Elizabeth Watkins, PhD, dean of the Graduate Division and vice chancellor of Student Academic Affairs. The event was organized and hosted by the Office for Postdoctoral Scholars, part of the UCSF Graduate Division.

“Now, perhaps more than ever, the University and the entire research enterprise need people who can successfully advocate for science, and defend the cause – and the funding – of scientific research,” she said.

The more than one thousand postdoctoral fellows at UCSF are often the unsung heroes of the research enterprise, doing much of the hands-on work as well as acting as second mentors to graduate students.

Since 2009, the National Postdoc Association has sponsored National Postdoc Appreciation Week to recognize the significant contributions that postdoctoral scholars make to U.S. research and discovery. Institutions from across the country and other parts of the world participate by holding special events.

At UCSF, Postdoc Slam, which featured 3-minute presentations by 10 postdocs, is the centerpiece of the weeklong celebration.

The 10 finalists for the competition were selected from 22 video entries by a panel of screening judges. A panel of five final judges, including representatives from the University and science journalism, decided the winner and runner-up at the live competition, while audience votes determined the “People’s Choice” winner.

In opening remarks, California Assemblymember David Chiu, who represents the 17th Assembly District, which encompasses the eastern part of San Francisco, underscored the importance of scientists being able to convey the work they are doing to non-scientists, particularly politicians.

Aaron Hardin, PhD: “Why are Your Nipples There?”

Christy Sheehy, PhD: “The Eye: A Window Into Our Brain”

Melanie Morrison, PhD: “Pediatric Brain Cancer and Radiation Therapy: The Good the Bad and the Ugly”

Selim Boudoukha, PhD: “When a Loose Thread Becomes a Threat!”

Yue Leng, PhD: “Sleep to Save the Aging Brain”

“We are here today from my perspective because science and facts matter – and not all policymakers believe that,” said Chiu. “It is so important that you are honing your craft.”

For the audience, it was a intriguing glimpse at the range of research being done at UCSF. The 10 fast-paced presentations spanned topics from ethics to basic molecular biology research to translational research in drug and device development.

Engelberth’s talk, titled “The Tooth: Small but Mighty,” rose to the top for the first place win, which was accompanied by a cash prize of $3,000.

She studies the structural protein – amelogenin – that gives enamel its strength by binding individual mineral rods into rope-like strands that crisscross in a characteristic pattern for mechanical robustness against all the impacts that teeth sustain. She has screened a number of molecules and found one that can bind mineral rods into structures as strong as natural enamel.

“Events like the Postdoc Slam are so important to remind us all that science doesn’t have to be unapproachable or scary,” Engelberth said. “It takes a lot of effort to be intentional about communication, but it is well worth it to share our efforts with non-scientists and discuss our work as practical problem-solving.”

Christy Sheehy, PhD, claimed both the $1,500 runner-up prize and the $750 People’s Choice award for her engaging presentation “The Eye: A Window Into Our Brain.”

“In neurology, we are often left with asking patients how they are feeling, reporting their symptoms … and we are left to determine what went wrong,” said Sheehy, who is a postdoctoral scholar in the lab of Ari Green, MD, the medical director of the UCSF Multiple Sclerosis Center.

“Imagine waiting for a heart disease patient until after they have had a stroke or heart attack to start figuring out what’s going wrong. Neurological tools really have to catch up and that’s where my project comes in.”

She gave a tantalizing peek into her work designing and building one of the world’s most sensitive eye trackers. It measures the tiny movements at the back of the eye to assess brain health in a way that is far less expensive and easier than current brain imaging methods.

“I love teaching and sharing my passion for research with others, so this event was the perfect opportunity to do just that,” said Sheehy.

Stella Bialous, RN, DrPH, an associate professor of social and behavioral sciences at the School of Nursing, is a faculty mentor of one of the finalists, and is an ardent supporter of the premise of Postdoc Slam.

“Being able to concisely describe your work is a lifetime skill,” said Bialous. “It will serve them well on job interviews, funding pitches, and you never know when the person next to you on the bus might be just that angel investor looking for a good idea.”