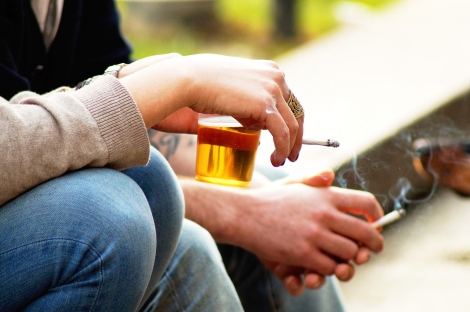 Young adults get more pleasure from smoking cigarettes while they are drinking alcohol than they do while using marijuana, according to a new UC San Francisco study.

The study is the first to document that tobacco accompanied by alcohol provides cigarette smokers with a greater perceived reward than when they smoke cigarettes while using marijuana.

The study will be published online April 18, 2017, in the journal Addiction Research & Theory.

“What we’ve learned may have important implications for understanding differences in co-use of cigarettes with alcohol versus marijuana,” said co-first author Noah R. Gubner, PhD, a postdoctoral scholar at the Philip R. Lee Institute for Health Policy Studies at UCSF.

Research has shown that among young adults, cigarette smoking is strongly associated with alcohol and marijuana use – and smoking is particularly common among heavy drinkers or binge drinkers. Previous studies have also shown that the combined pharmacological effects of cigarettes and alcohol can lead to a heightened sense of reward for the users.

In the new study, which used self-reported data, participants were between the ages of 18 and 25, living in the United States, and reported current smoking along with recent use of alcohol or marijuana, or both. The study recruited participants between October 2014 and August 2015 through a paid advertising campaign on Facebook. Altogether, there were 500 participants.

“Since the main route of administration for marijuana is smoking, some aspects of marijuana use (such as the smoke, lighting of a joint, the throat feeling when inhaling smoke) may serve as cues that increase urges to smoke cigarettes,” the authors write. “In addition, certain individuals may enjoy aspects of smoking in general, regardless of substance.”

“Our findings point to different reasons why people co-use cigarettes with marijuana than with alcohol,” said Johannes Thrul, PhD, co-first author of the study and a postdoctoral scholar at the UCSF Center for Tobacco Control Research and Education. “Smoking cessation interventions should highlight these differences and address co-use to effectively help people cope with triggers to smoke.”

The authors noted some limitations in the study, including their focus on the enhancement of perceived pleasure of smoking cigarettes by alcohol or marijuana “rather than the ability of cigarettes to enhance the pleasurable effects of other substances.”

The other UCSF co-authors are Oona A. Kelly, a clinical research coordinator, and Danielle E. Ramo, PhD, an assistant professor in the Department of Psychiatry and a member of the Weill Institute for Neurosciences. Ramo, the principal investigator of the study, is also a member of the UCSF Helen Diller Family Comprehensive Cancer Center.