In her house on a hill in San Francisco with sweeping views of the city, Eve Ekman, PhD, MSW, has a meditation altar, which highlights her spiritual interests.

In a nearby room, Ekman has the lamp by which her father, Paul Ekman, PhD, UC San Francisco professor emeritus in psychology, studied facial expressions – part of his work about external emotions that have permeated the public through outlets such as the television series “Lie to Me.”

The combination of the Ekmans’ work on external and internal emotions has extended their findings beyond academia and into popular culture, and it has culminated in partnerships that include one with Tenzin Gyatso, the 14th Dalai Lama, to create a digital map of human emotions.

Now, Eve Ekman has moved the work forward through development of an app to help people track and understand their emotions throughout the day.

An Early Interest in Social Justice

Growing up as the daughter of Paul Ekman, Eve Ekman stood a good chance of being overshadowed by her father’s accomplishments. Paul Ekman, who was a professor of psychology at UCSF from 1972 to 2004, is one of the world’s foremost experts on monitoring facial expressions and gestures to make sense of nonverbal behavior.

His interest in “micro facial expressions” began in the late 1960s when he reviewed film of depressed patients and saw in slow motion brief fleeting expressions of strong negative feelings that these patients were trying to hide to avoid suicide watch.

Upon his retirement from UCSF in 2004, to translate his research into resources that would be helpful to the general public about using facial expressions as a window to people’s feelings, he formed the Paul Ekman Group, wrote several lay books on the topic, developed workshops and interactive training tools and consulted with law enforcement as well as the entertainment industry. He was the scientific adviser for the television show “Lie to Me,” about a deception researcher whose main character was based on Paul Ekman. 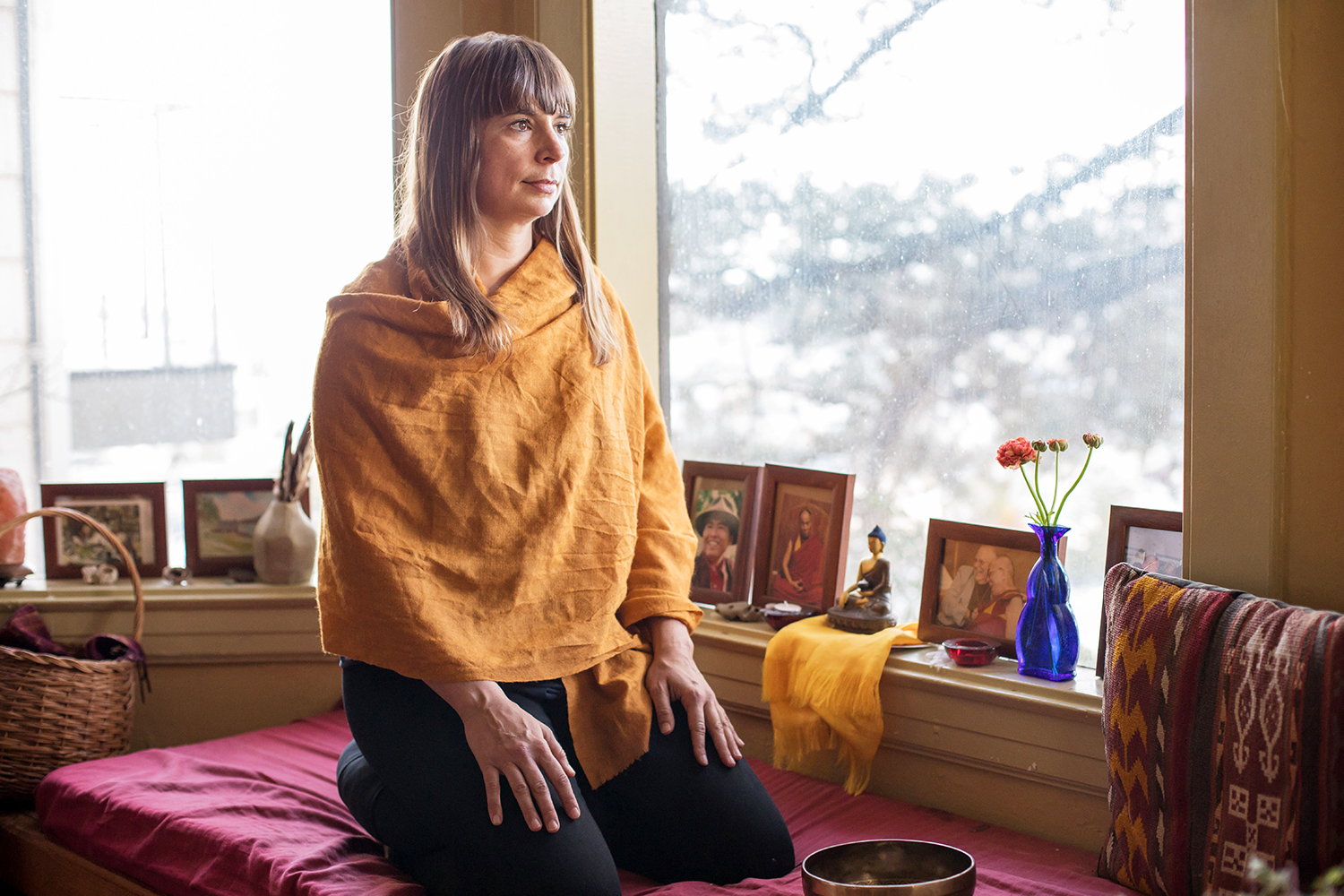 Eve Ekman, now a postdoctoral fellow at UCSF’s Osher Center for Integrative Medicine, had no interest in riding on the coattails of her father, but an entire childhood steeped in exposure to his work on the importance of emotions and his interest in antiwar efforts left its mark on her.

Ekman has always known that she wanted to make the world a better place, and her commitment to social justice began as a teenager. She participated in protests, volunteered in soup kitchens and even founded a Free Tibet student group in the 1990s.

It was her spiritual interests that spawned possibly the greatest collaboration of her father’s career: with Tenzin Gyatso, the 14th Dalai Lama.

“My dad was definitely not interested in meeting a spiritual leader, but he knew that I had been a longtime fan of the Dalai Lama for his nonviolence and peaceful protests,” says Eve Ekman. Her father was invited to participate in the Mind and Life Institute’s Dialogues with the Dalai Lama, and accepted the meeting in 2000 because he could bring his daughter with him.

A Change in Course

Meeting with the Dalai Lama was an experience that altered the course of Paul Ekman’s career, as he realized that contemplative practices, such as mindfulness meditation, would allow him to help people in a way that he wasn’t able to through academic medicine or research.

After the meeting, Paul Ekman and the Dalai Lama began an ongoing collaboration that came to include Eve.

Just before the first CEB teacher training of how to use and teach emotional skills launched in Asia for 50 students from 20 countries, Eve Ekman stepped in at the last minute to teach. She was in college at the time studying politics and printmaking, without any prior knowledge of the subject matter of contemplative practice, meditation and how that mirrors Western psychology.

“I was taken aback by how simple and how awesome it was to use this kind of work to help people,” she says.

She later decided to rework that training for her PhD dissertation in social welfare at UC Berkeley, and uses it in her current studies. “I continue to adapt this frame of looking at the world through the lens of emotion,” she says, specifically how aspects of psychology and Buddhist practices can help understand and manage emotions.

She focuses on the subjective experience of emotion, as opposed to facial signals of emotion. “I invite people to understand not only what emotions feel like physically, but to explore the story of emotion from trigger to experience to their response,” she says.

She took over teacher training in 2010 and has been teaching it nonstop ever since, helping people develop emotional self-awareness and compassion.

In 2014, the Dalai Lama commissioned both Ekmans to create The Atlas of Emotions – a sort of digital map for people to explore and understand emotions.

Most scientists who study emotion agree that there are at least five universal emotions: enjoyment, sadness, disgust, anger and fear. The Ekmans teamed with a design firm to build a visual tool that allows people to visually explore the states of each of the universal emotions. The goal is to teach people how to identify and describe emotions to increase choice in how to respond to them.

“We are excited to provide a simple tool that emphasizes communication of emotional experience,” Eve Ekman says of the website, which launched in 2016.

Emotional Monitoring on a Phone

While the Atlas of Emotions is a large map on a computer, Eve Ekman has turned to a smaller guide that can be carried around.

Her current brainchild, called EmoTrak, “is like having a little Atlas of Emotions in your pocket,” she says.

Developed in its first rendition specifically for medical residents, the iPhone application relies on simple self report, asking users twice a day to report the trigger, experience and response of their most recent emotion. The app taps into moment-to-moment emotions, allowing residents to become more aware of the emotions they experience throughout their busy days – and why and how they deal with that emotion.

Well over half of residents suffer from “burnout,” feeling overwhelmed and exhausted, according to recent research. These stressful feelings can lead to decreased empathy and suboptimal care for patients and can result in medical errors.

“That very simple practice of bringing awareness of our emotions has the potential to remind us that even amidst the most challenging times we have capacity for being OK,” she says.

New Work Based on Earlier Career

The impetus for Ekman’s EmoTrak built upon work early in her career.

While she was working as a social worker in the emergency department at Zuckerberg San Francisco General Hospital and Trauma Center helping patients and their families, she had a realization: her colleagues and coworkers needed help, too.

“I could feel palpably their stress and strain and I was very aware of how little support we all had in managing this,” she says.

So she has dedicated her efforts toward helping health care workers avoid job burnout, and particularly how to support their compassion and empathy toward patients.

After completing her PhD studies in social welfare at UC Berkeley in 2014, Ekman arrived at UCSF, where she has developed strategies around the idea that caregivers who practice skills for mindfulness of emotions and compassion can buffer stress by promoting feelings of purpose and efficacy – and potentially improve how they care for patients.

“People may resist the idea of meditations, that it is too touchy-feely to be sending compassion to the patients they can’t really help,” she says. “I counter with: ‘What is the other option? Numb out, beat yourself up about it? How else can you manage these stressful feelings?’ That seems to resonate with a lot of people.”

A few years ago Ekman had the opportunity to experience her hypotheses firsthand as she dealt with health care workers during a months-long painful disc herniation, surgery and recovery.

Though she had topnotch medical care, she encountered in the health care workers a great range of interpersonal skills, from amazing compassion to clear burnout, and she reaffirmed the importance of connection between caregiver and patient in managing fears and improving health.

“The humbling experience of losing my ‘healthy’ identity reaffirmed my research goals,” she says. “I truly know that patient care can be better through communication and empathy.”