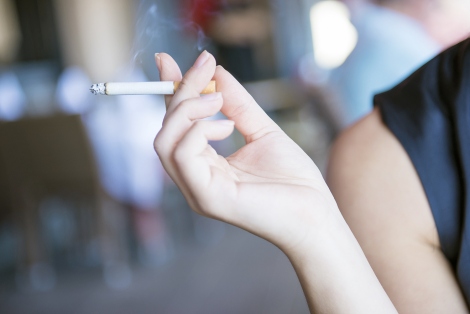 Smoking by either parent helps promote genetic deletions in children that are associated with the development and progression of the most common type of childhood cancer, according to research headed by UC San Francisco. While the strongest associations were found in children whose parents smoked during their infancy, these deletions were also noted in the offspring of parents who may have quit smoking even before conception.

The link between acute lymphoblastic leukemia (ALL) and parental smoking – especially paternal smoking – has already been established, but this is the first study that points to specific genetic changes in the tumor cells of children with the cancer, said co-first author Adam de Smith, PhD, assistant researcher in the Department of Epidemiology and Biostatistics at the UCSF Helen Diller Family Comprehensive Cancer Center.

“With more smoking among the parents, we saw more deletions within the child’s ALL cells at diagnosis,” de Smith said.

ALL, which is one of two primary types of leukemia in children, occurs when white blood cells called lymphocytes develop errors in their DNA, causing unchecked growth that crowds out healthy cells. Genetic deletions found in ALL patients wipe out cell-cycle control proteins and critical transcription factors required for the development of cells that play a key role in the immune response.

Approximately 3,100 children and teens are diagnosed each year with ALL, according to the American Cancer Society. While the five-year survival rate is high – 90 percent for children under 15 and 75 percent for 15- to 19-year-olds, according to the National Cancer Institute – long-term effects, which include an elevated risk for secondary cancers, may be serious and life threatening.

In the study publishing April 1, 2017, in the journal Cancer Research, UCSF scientists and their colleagues at UC Berkeley, Stanford University and University of Southern California looked at pre-treatment tumor samples from 559 ALL patients collected by the California Childhood Leukemia Study, an initiative that investigates the causes of the disease. The scientists wanted to see if any of the eight genes that are frequently deleted in ALL patients were found to be missing in the samples.

Questionnaires were given to parents to find out if smoking habits impacted the number of genetic deletions. Data was corroborated by a biomarker in newborns’ blood samples in the AHRR gene that indicates exposure to maternal smoking during pregnancy.

Smoking of five cigarettes daily by the mother or father before conception also was associated with a 7 percent to 8 percent higher number of deletions. One intriguing finding was the link between fathers’ pre-conception smoking and their child’s age at diagnosis.

“There was a significant effect on deletion numbers in cases where the patient was age 6 or younger,” said de Smith. “Our results suggest that paternal pre-conception smoking, which is known to cause oxidative damage to sperm DNA, may lead to a higher propensity of deletions in children with earlier-onset ALL. It is also true that some of those fathers who smoked before conception also continue to smoke in the presence of the mother and child, so more research is needed to explain the mechanism of smoking-related damage in all of the time periods of exposure to the child."

Male children were found to be more sensitive to the effects of maternal smoking, including smoking that occurred pre-conception. This could be explained by the fact that male fetuses grow more rapidly, leading to increased vulnerability of developing lymphocytes to toxins that cause genetic damage, the authors noted.

“Our study indicates that the more tobacco exposure, the more cumulative DNA damage is evident in the ALL cell,” said senior author Joseph Wiemels, PhD, professor in the Department of Epidemiology and Biostatistics at the UCSF Helen Diller Family Comprehensive Cancer Center.

Smoking Just One Factor in ALL

“While causes of ALL are multifactorial – including the inborn genetic makeup of the child, patterns of infection, pesticides and other environmental exposure – if there was no smoking in the environment, then there would likely be fewer children with the disease,” Wiemels said.

“We may add ALL to the long list of diseases impacted by smoking, and in this case affecting one of our most vulnerable populations – our children.”