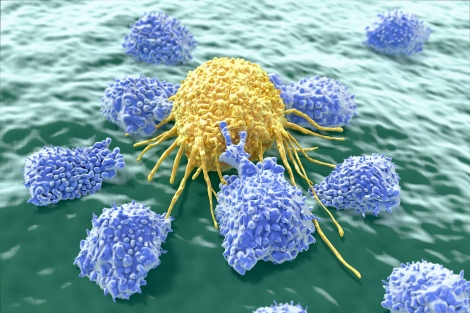 New research led by researchers from UC San Francisco and Stanford University has found that successful cancer immunotherapy appears to depend on whether the treatment can trigger a system-wide immune response, rather than just a local response within the tumor itself. Specifically, data from both mouse models and human patients indicated that successful immunotherapy activates a population of peripheral “memory” immune cells that the researchers speculate are key to immunotherapy’s ability to mount a long-term defense against cancer throughout the body.

The findings — published Jan. 19 in Cell —  suggest a new explanation for why immunotherapy, for all its promise, has so far only been effective in a minority of cancer patients, the authors say, and offers leads about how to tweak the approach to bring its benefits to many more people.

“Profiling the immune response across the organism allowed us to see that successful immunotherapy involves widespread activation of the immune system in places far from the tumor itself: in the lymph nodes, the bone marrow, in the blood,” said lead author Matthew Spitzer, PhD, a UCSF Parker fellow and Sandler Faculty Fellow, and a member of UCSF’s Parker Institute for Cancer Immunotherapy. “This suggests that priming the immune system for a more systemic response could significantly broaden the effectiveness of immunotherapy.”

Spitzer conducted much of the research for the new study as a graduate student in the labs of Edgar G. Engleman, MD, and Garry P. Nolan, PhD, of Stanford University, and recently joined UCSF as a faculty fellow to continue his work studying how the immune system coordinates its systemic response against cancer and other threats.

Immunotherapy has been lauded as a transformative new treatment for cancer: in some patients recruiting the immune system to battle cancer makes tumors melt away and stay away. But so far, most patients simply don’t respond. Some forms of immunotherapy, such as anti-PD1 “checkpoint blockade” therapy, are frequently effective against melanoma, but fail to trigger a successful immune response against most carcinomas, which are the most common forms of cancer.

Most previous studies of immunotherapy response have focused on how treatments recruit immune activity within tumors themselves, but in their new research, Spitzer et al took a larger view of the problem, developing a computational platform — which they call “Scaffold” — that let them intuitively visualize the immune response in detail across a whole organism during successful and unsuccessful immunotherapy treatments.

“Previously we really had no ability to analyze, in detail, the state of immune cells throughout the body,” said Engleman. “This allowed us to get a detailed snapshot of what the immune system likes like in many different tissues at one time, or at several different time points.”

Specifically, the researchers used a genetically engineered mouse model of triple-negative breast cancer to study how the immune response to anti-PD1 therapy (which is ineffective in these mice) differed from the immune response to an experimental therapy that the researchers had recently shown to be highly effective against the form of cancer these mice develop. The new therapy combines tumor-binding antibodies — which provide a bridge between tumor and the immune system — with chemicals that activate a type of messenger immune cell called dendritic cells which are important for educating the rest of the immune system about specific threats.

In the new study, the team analyzed immune cells from different tissues across the body using a sensitive technique called mass cytometry to identify which types of immune cells were present and learn about their functional state. Using Spitzer’s Scaffold software, they were able to see that while the ineffective anti-PD1 therapy triggered a short-lived immune response in the tumor itself, the effective experimental treatment triggered a coordinated immune response across many different tissues, even as the immune response within the tumor itself began to die down.

“This suggests that studies which have looked for activated immune cells within the tumor as a sign that immunotherapy is working may have been looking in the wrong place,” Spitzer said. “You need to see an immune response outside of the tumor to have an effective treatment.”

In addition, the team found that successful immunotherapy activated a population of immune cells called CD4+ T cells, which appear to be key to “remembering” the tumor and coordinating a long-lasting immunity to cancer throughout the body. When the researchers extracted CD4+ T cells from successfully treated mice and transplanted them into other mice, these memory cells alone proved to be sufficient to trigger an immune response against the other animals’ tumors.

“Most people have focused on CD8+ T-cells, which are like the immune system’s police force that go around taking out dangerous cells,” Spitzer said. “The fact that we saw such an important role for CD4+ cells instead was a bit surprising. But these cells are very important for coordinating immune responses in other settings, so it is logical.”

To learn whether the same type of systemic response occurred in human patients who responded well to immunotherapy, the authors used their technique to examine of the blood of patients who had been given anti-PD1 drugs to treat melanoma. The researchers found signatures of the same type of CD4+ T cell activation in the blood these patients, suggesting that a similar systemic immune response may be key to the success of immunotherapy in humans as well – even with a different type of cancer and different immunotherapy approach altogether.

Finally, the authors examined how some tumors might be evading treatment in cases where immunotherapy fails. In their animal models, they showed that following the injection of immunotherapy agents into a primary tumor, other tumors in the animal start producing a molecule called PD-L1, part of the “checkpoint” system that acts to suppress the ability of the immune system to attack these tumors. The authors found that adding an anti-PD-L1 drug to their experimental immunotherapy enabled the immune system to successfully eradicate these additional tumors.

The new study shows that measuring the body's immune response as a whole may be key to understanding how to effectively recruit it in the fight against cancer.

“We find that the more you look into the areas you think you understand, the more you realize you are missing the big picture,” said Nolan. “By looking at everything and using social network math, we can discover how cells work together to defeat cancer. Interestingly, it is also providing clues on which cell types cancer interferes with to defeat the immune system.”

Spitzer says he hopes the techniques he and his colleagues have developed will open the door to a wide variety of experiments to understand the complex workings of the immune system: “We simply haven’t had a good way to assess immune health across the whole organism until now. We’ve been looking through a pinhole — now we have an opportunity to see the entire landscape.”