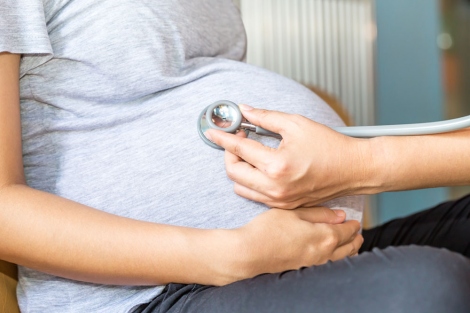 Low income and Latina pregnant women who seek care at Zuckerberg San Francisco General Hospital and Trauma Center (ZSFG) have widespread exposure to environmental pollutants, many of which show up in higher levels in newborns than the mothers, according to a new study from UC Berkeley, UC San Francisco and Biomonitoring CA.

The study is the most extensive look yet at how the chemicals pregnant women are exposed to also appear in their babies’ cord blood. It measured 59 chemicals, a broader array than has been examined before in a single study, providing a first indication of how several different classes of environmental chemicals found in a pregnant woman’s blood are also present in the newborn. From 2010 to 2011, researchers collected maternal blood samples from 77 pregnant women at ZSFG. Once they delivered their babies, researchers collected umbilical cord blood samples from 65 of these women. Almost 80 percent of the chemicals detected in maternal blood samples were also detected in the umbilical cord blood samples, indicating that they passed through the placenta and entered the fetal environment.

“Pregnant women in the U.S. are exposed to many harmful industrial chemicals that have been linked to premature birth, low birth weight, and birth defects, but estimates of how efficiently pollutants are transferred from mother to fetus have varied widely,” said Tracey Woodruff, PhD, professor in the Department of Obstetrics, Gynecology, and Reproductive Sciences and the Philip R. Lee Institute for Health Policy Studies at UC San Francisco.

Woodruff, the senior author of the study, also directs the Program on Reproductive Health and the Environment at UCSF. “Our findings have found that many chemicals do indeed accumulate in the fetal environment and are absorbed at greater levels by fetuses than by the pregnant women themselves. This may have significant consequences for the growing fetus, since many of these chemicals are known to affect development.”

Researchers measured polychlorinated biphenyls (PCBs), organochlorine pesticides (OCPs), polybrominated diphenyl ethers (PBDEs), perfluorinated compounds (PFCs), mercury and lead, among other chemicals, in the women and in their babies’ umbilical cord blood. In previous studies, many have been detected in greater than 99 percent of U.S. pregnant women, according to the National Health and Nutrition Examination Survey (NHANES) data.

Eight of the 59 chemicals analyzed were detected in more than 90 percent of both the maternal and cord blood samples. Of those samples tested for all 59 chemicals, the median number was 25 in maternal blood and 17 in umbilical cord blood.

“Contrary to previous research, we found evidence that several PCBs and OCPs were often higher in umbilical cord samples than in maternal blood samples,” said lead author Rachel Morello-Frosch, PhD, MPH, professor in the Department of Environmental Science, Policy and Management and the School of Public Health at UC Berkeley.

The study also found concentrations of mercury and certain PBDEs were often higher in umbilical cord samples than in maternal samples. For most PFCs and lead, cord blood concentrations were generally equal to or lower than maternal concentrations, which is consistent with previous research.

The study was published Nov. 1, 2016, in the print edition of Environmental Science and Technology.

The women in the study were participating in the Chemicals in Our Bodies Study (CIOB Study), also referred to as the Maternal and Infant Environmental Exposure Project. Of the women participating in the current study, 95 percent had a combined annual household income of less than $40,000, two-thirds were Latina, and a third were born in Mexico, where they may have had less exposure to environmental toxics like the PBDEs found in flame retardants that have been widely used in the U.S. These demographics are not well represented in larger biomonitoring studies, such as NHANES, that form the basis of most of what is known about pregnant women’s exposure to environmental toxics nationally.

“It is important for researchers to more fully understand chemical exposure trends among women of color, as well as immigrant and low income women, as these populations are often understudied,” Morello-Frosch said.

“Our findings highlight the need to inform policymakers and the public about the potential health risks of prenatal chemical exposures and reduce the sources of exposure to these compounds,” Woodruff said.