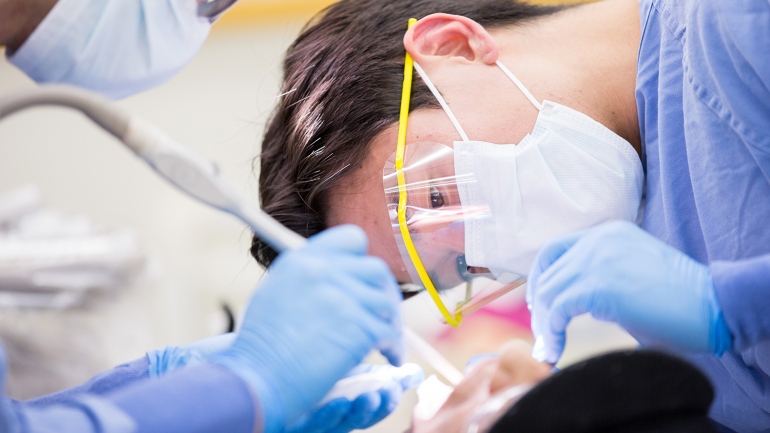 Several years ago, Peter Rechmann, DMD, PhD, professor of Preventive & Restorative Dental Science at UC San Francisco’s School of Dentistry, saw a patient who was convinced that she needed a new set of dental crowns.

“That sounded good for my practice, but I didn’t do any crowns for her,” Rechmann said.

He was using what was then a new approach to dentistry known as Caries Management by Risk Assessment (CAMBRA), which emphasizes prevention and risk assessment rather than surgical procedures.

Rechmann forewent an easily billable procedure and instead, advised his patient to use a high-concentration fluoride toothpaste, anti-bacterial rinse, and xylitol chewing gum. When she returned a few months later, her teeth enamel had remineralized so much that she was no longer a candidate for crowns.

“I could show her in the mirror how hard the enamel was, and she was amazed,” Rechmann said.

Years after CAMBRA was developed at UCSF, it is starting to make inroads among dental professionals nationwide, and Rechmann is leading the first large study of the protocol in community dental practices. Researchers are hoping the study will validate the protocol’s effectiveness of catching early signs of caries, or cavities, and reversing them by addressing the underlying disease factors.

CAMBRA is a departure from the “drill and fill” approach to dentistry that is still dominant, said John Featherstone, PhD, dean of the School of Dentistry and one of the researchers at UCSF who helped to develop the CAMBRA approach in the early 2000s. Since then, Featherstone has been invited around the world to assist with CAMBRA implementation, including Japan, Argentina, Mexico, New Zealand, China, and Israel.

“Traditionally, most dental schools around the world taught their students to deal with a pre-cavitated lesion by drilling it out and filling it with some so-called restorative material – and that’s gotten very sophisticated over the years,” he said. “But this was really not solving the problem because it was not dealing with the bacteria.”

Dental caries is an infectious disease caused by acid-producing bacteria that feed on fermentable carbohydrates in the mouth. The acids can dissolve minerals in the tooth surface, creating lesions that eventually become cavities. Simply filling the lesion does little to stem the underlying bacterial infection, and more than 70 percent of restorative dental treatments are performed on previously restored teeth.

Every first-year dental student learns the science behind caries, but the relevance to clinical practice has not always been made clear. “In the early 1990s it became pretty obvious that we should take everything we knew and put it into a different way of managing the disease,” said Featherstone, who has been studying dental caries for 40 years.

CAMBRA weighs, in a standardized way, the many biological and lifestyle factors that determine caries risk. The most negative factors are disease indicators, such as visible cavities, enamel lesions, white spots and fillings within the last three years. Other contributors include the presence of harmful bacteria, inadequate saliva flow and frequent snacking. These risk factors are weighed against protective factors, such as living in a community with a fluoridated water supply, using fluoride toothpaste and antibacterial mouth rinses, and adequate saliva flow.

Dentists can assess a patient's risk for dental carries by weighing risk factors against protective factors.

Based on these factors, CAMBRA guides a dentist in categorizing a patient as having low, medium, high or extreme risk, and in determining an appropriate caries management strategy. A patient at higher risk might be prescribed a potent fluoride toothpaste and antibacterial mouth rinse, and asked to reduce snacking between meals.

CAMBRA is already widely taught and applied at academic dental clinics, but has made only minor inroads into private dental practices. One barrier is that most insurance companies do not yet reimburse preventive therapies for adults, meaning patients face higher costs and dentists make less profit. But this is changing, said Rechmann. As insurance companies see proof of the long-term cost savings of prevention, they are likely to expand coverage to these measures.

Every year at the meeting of the National CAMBRA Coalition, more and more insurance companies show up, Rechmann said.

Another barrier is convincing practitioners to switch playbooks. “Changing habits is an enormous thing,” Rechmann said. Everyone in a dental office – dentists, assistants and the front desk – has to be on board for the CAMBRA approach to be successful, he said.

Several large-scale studies have validated CAMBRA’s accuracy in identifying who will likely develop caries. In one study, 69 percent of patients rated as high risk and 88 percent of those rated as extreme risk developed caries by the next visit, an average of 16 months later.  In children up to six years old, a study published earlier this year found that only 20 percent of low-risk patients had tooth decay at follow-up visits, compared to nearly 70 percent of those at high-risk.

Several large-scale studies have validated CAMBRA’s accuracy in identifying who will likely develop caries. In one study, 69 percent of patients rated as high risk and 88 percent of those rated as extreme risk developed caries by the next visit, an average of 16 months later.

Now, researchers are looking at CAMBRA’s ability to keep caries at bay. The UCSF Dental Center clinic has followed CAMBRA protocols for 13 years, and studies have shown reductions in new decay in patients who use the prescribed products. A 2015 study of adults at high risk found that, when anti-cavity agents were dispensed multiple times over a period of 18 months, CAMBRA prevented one decayed or restored tooth for every three patients.

Rechmann is leading the first trial of CAMBRA in community dental offices, a collaboration between the School of Dentistry and the California Dental Association Foundation. The two-year study, which will be published in 2017, recruited 30 dental offices in the Bay Area, trained the practitioners in CAMBRA, and assessed the patients every six months, half receiving CAMBRA care, the other half standard care. Rechmann said the preliminary results are promising.

“We can for sure show that caries risk for patients at high risk drops to low risk, if they follow the CAMBRA protocol,” he said.

Switching over to CAMBRA may initially require extra work for a dental office, but it’s ultimately good business, said Rechmann. When patients see a dentist who gives them options and does not turn to the drill first – they tell their friends. “CAMBRA finally gives the patient a chance to prevent caries,” he said.