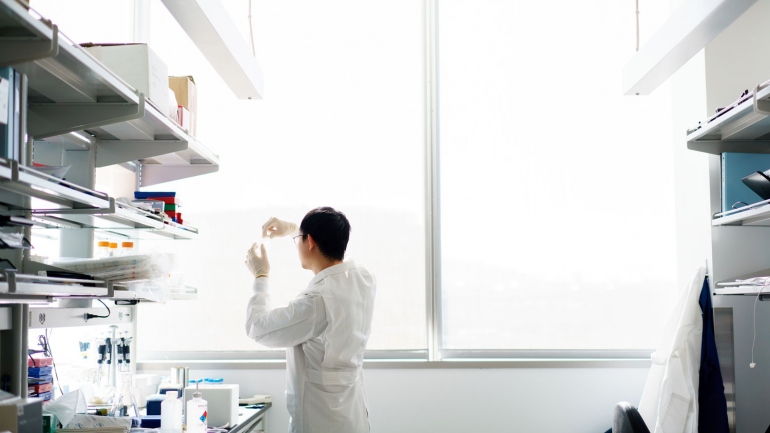 In 1966, Bruce Alberts, PhD, was a promising 28-year-old biochemist applying for his first federal research grant.

At that time – long before Alberts was chair of the Department of Biochemistry at UC San Francisco, president of the National Academy of Sciences, editor-in-chief of Science, National Medal of Science laureate and the recipient of the Lasker~Koshland Special Achievement Award in Medical Science ­– he had recently been hired as an assistant professor at Princeton University and was setting up his lab there, where over the next decade he would make fundamental discoveries about DNA replication.

It took Alberts six months to win that first grant from the National Institutes of Health (NIH) ­– a rather long time in those days, he recalled. Half a century later, the road to a first “R01,” the mainstay grant for biomedical researchers, for early-career biomedical researchers is much longer – on average four to five years.

To help today's researchers, Alberts has joined a cadre of other notable researchers to advocate for a major overhaul of the U.S. biomedical research system.

A Long Road to Independence

The competition is fiercer today because even as the number of PhD graduates has kept growing, research funding has stagnated. The NIH budget in 2014 was 25 percent less, in constant dollars, than it was in 2003.

The average age at which biomedical scientists today receive a tenure track job is 37, meaning they are approaching 42 when they receive their first NIH grant.

Instead of having the independence to explore new, innovative lines of research, early-career scientists find themselves stuck in prolonged post-doctoral positions, after which they are likely to continue work that hews closely to that of their mentors, said Alberts.

“A great opportunity cost is that we don’t empower the best young people to try ambitious new things,” said Alberts, who is now the Chancellor’s Leadership Chair in Biochemistry and Biophysics for Science and Education at UCSF.

Alberts, 78, at a point in his career when he easily could be resting on his laurels, has taken up the cause of empowering young scientists. He and a group of prominent scientists, including Nobel Prize laureate, former UCSF professor and former NIH Director Harold Varmus, MD, have begun an initiative to fix what they see as systemic flaws in the current biomedical research enterprise. Their initiative, known as Rescuing Biomedical Research, aims to clear the obstacles that prevent young scientists from conducting creative, high-risk, high-gain research.

Risk-taking and curiosity are inherent to scientific discovery, but the current biomedical funding system has become increasingly conservative, said Alberts.

When we started as professors, we saw it as a chance to work on our own ideas, challenge yourself to do something new. Now young scientists think they won’t have a job if they try something new.

For one thing, grant reviewers tend to value past performance over future promise. When applying for NIH grants, early-career researchers are pitted against established investigators with decades of results and long lists of publications. New investigators with a new idea stand a slim chance in this system, and most choose the safer route of continuing their post-doctoral projects, for which they can show some preliminary results. Only about 1 percent of NIH funding is awarded to principal investigators younger than 36 years old.

A possible remedy, suggests Alberts, is to have separate funding programs for early-career scientists, so that those starting out compete only with each other. Since 2007, the European Research Council has had such a model in which investigators compete in three tiers: one for scientists just starting a laboratory, another for a scientist’s second grant and the third for more experienced investigators.

“When we started as professors, we saw it as a chance to work on our own ideas, challenge yourself to do something new,” said Alberts. “Now young scientists think they won’t have a job if they try something new.”

Another problem, for investigators of all ages, is the increasing pressure to work only on research that has clear applications to human health. In 1990, the NIH spent three times as much on basic research as on applied research, whereas today the ratio is close to one-to-one, according to an analysis by Alberts. NIH funding for research using fruit flies – the model organism that has unlocked so much of our knowledge of genetics and developmental biology – has dropped 30 percent since 2010.

The focus on translational and clinical research is dangerously myopic, said Alberts, because it neglects the type of basic research that helps us understand the fundamental processes of life and in the long-term will lead to major advances yet unfathomable.

He likes to cite an example from the field of physics: In 1938, researchers at Columbia University invented a technique known as magnetic resonance to study fundamental properties of atoms and suggested the possibility of an atomic clock. “Everybody thought that it was wonderful, but useless, that atomic clocks would allow us to measure time to a billionth of a second,” said Alberts. But three decades later, these atomic clocks were used in military positioning satellites and today, satellites carrying atomic clocks make possible the ubiquitous GPS technology in our mobile devices.

The leaps and bounds made by biomedical science in recent decades, from DNA sequencing to brain mapping to treatments for diabetes and cancer, belie how much we still do not know. Even the simplest living cell holds countless unsolved mysteries, said Alberts. Early this year, when geneticists Clyde Hutchison, PhD, and Craig Venter, PhD, created a synthetic bacterium with only the most essential genes, they noted that of these 473 genes, 149 were of completely unknown biological function.

“Hundreds of talented young scientists should be leaping to fill this huge gap in understanding of fundamental biological mechanisms, perhaps earning several Nobel Prizes along the way,” Alberts wrote in an opinion article published Tuesday in the Journal of the American Medical Association.

Rescuing Biomedical Research is only two years old, but the idea that a vibrant U.S. research culture is at risk has been simmering in Albert’s mind for a long time.

In the 1990s, as president of the National Academy of Sciences, Alberts had the Academy produce a series of lay-friendly pamphlets describing examples of basic research that led to important but unanticipated applications. They sent one-page summaries to the office of every member of Congress.

This week, Rescuing Biomedical Research is convening a meeting in Washington, D.C., including representatives from NIH, to review specific proposals for changing the system that range from reorganizing the NIH funding structure to reevaluating the practice of scientific publishing.

Creating change on this scale is hard because most people tend to defend the status quo, said Alberts.

“But I like change,” he said. “And if you think about it, science is all based on experiment, evidence, trying new things – so I think scientists are more comfortable with change than many others.”